"One of my favorite genres of books is the instructional manual."

"I love how the act of writing a novel teaches you what’s actually important about it": Michael Shou-Yung Shum chats with Jamie Yourdon about his debut novel, Queen of Spades, out now from Forest Avenue Press.

I first met Michael Shou-Yung Shum in 2016, at the AWP Conference & Bookfair in Los Angeles. At the time, we didn’t share a publisher—Michael and Laura Stanfill, of Forest Avenue Press, were still in discussions about his debut novel, Queen of Spades. But Laura wanted my impression of this mysterious author—Texas transplant, bearer of multiple doctorates, former poker dealer and rave DJ. Her curiosity was well founded.

I found Michael to be immediately winsome—as is Queen of Spades, a modern retelling of the classic Pushkin tale, set in a Seattle-area casino. Now that his book has been released and we share a press, Michael found time for a conversation in the midst of his national book tour.

Jamie Yourdon: Michael! You’ve written this beautiful debut novel, which draws upon your experience as card dealer in the Pacific Northwest. Can you talk about how you extrapolated a plot—or themes, setting, and characters—from that time in your life? How long did you live with this story before it reached the page?

Michael Shou-Yung Shum: I had been accumulating elements of a gambling story for as long as I can remember. One pivotal moment, although I could hardly have known it then, was when I saw an episode of the ABC show That’s Incredible in third or fourth grade. They had a blind dealer on as a guest, and his trick was that he could separate a 52-card deck into two smaller decks, one containing all the royal cards, and the other containing the rest, just from quickly feeling the weight of each card. The especially haunting aspect of his performance was the fact that he made one error—a ten, I believe—which is a card that has almost the same amount of ink imprinted upon it as a face card. I held many, many small experiences such as this in my subconscious that finally emerged when I was composing Queen of Spades.

I am wondering if you had any similar experiences in writing Froelich’s Ladder—events from your distant past that you hardly remember, that didn’t seem to make much of an impression at the time, but eventually found its way into your writing? 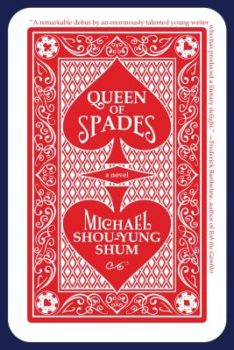 I was relatively new to Oregon when I started writing Froelich’s Ladder, so the setting didn’t evoke any place I knew, and I’ve yet to spend twenty years living atop a ladder (though, given the current political climate, gimme time). What I found myself drawing upon, oddly enough, was my memory of Shakespearean comedies. I knew I wanted to write something with a happy ending. The comedies that I read in high school—As You Like It, A Midsummer’s Night Dream—ended in a series of weddings, not only for the protagonists but for all the minor players, too. Well, the characters in Froelich’s Ladder begin in pairs: two brothers, two traveling companions, etc. Over the course of the novel, these pairs are fractured and reconstituted, such that everyone’s wed to a new partner by the conclusion.

Speaking of literary precedents, what drew you to the original Pushkin fable? It gets an explicit mention in the final chapter of Queen of Spades—did you feel a necessity to do that?

That’s very interesting that you mentioned wanting a happy ending—I had a similar idea for QOS, which was directly violating “Freitag’s Triangle” by having the action continue to rise until the ending, mimicking the form of a gambling winning streak. (Even so, I eventually felt compelled to add an epilogue that serves as a denouement.) Pushkin’s “The Queen of Spades” has haunted me ever since I read it—it is at the exact register that I want my gambling stories to be at, mysterious and nigh-mystical. Most gambling fiction lets me down because it is too self-consciously realist, too “gritty” for my tastes.

I wonder why you chose to eschew realism in your own novel, instead adapting a storytelling voice that comes out of a tradition of tall tales and spinning yarns? 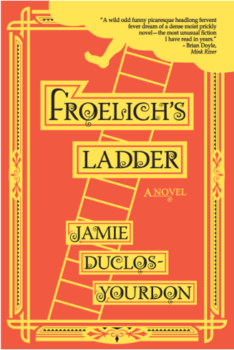 It wasn’t a deliberate effort on my part; if anything, I tried to insert realism where it didn’t belong! Like how a person living on a ladder could sustain a healthy diet. There was a period in 2014, before I began the novel, when I was seeing ladders everywhere. To my mind, they represented a ready-made story—i.e., who’s on top and who’s on bottom, what put them there, and why? I eventually conceived of a falling-out between two brothers, one of which climbs a ladder and refuses to come down without an apology. I don’t know if you have any siblings, Michael, but that strikes me as utterly plausible. One advantage of fabulism is that I get to make stuff up.

I feel like you teach the reader a great deal about gambling—which I appreciated, knowing very little, myself. Was that a concerted effort on your part? Did it ever feel pedantic, or was it another way to approach the content (or both)?

No, it was never pedantic, only enjoyable actually. One of my favorite genres of books is the instructional manual (for gambling, golf, ventriloquism, whatever), and the stranger the angle of approach of the book the better. For example, a friend recently gave me her deceased grandfather’s copy of Scarne on Dice and I was delighted to discover chapters on psychokinesis and repetitive throws. On a formal level, I’m very much drawn to meta-fictional conventions in novels such as lists, guides, rules, assignments, etc.

It strikes me that Froelich must have been quite a fun book to write. What was writing your new book like? I’d like to hear about transitioning from the previous project to your new one. 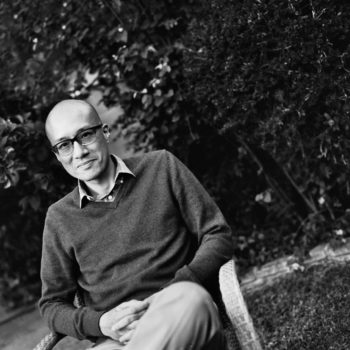 Eek. This new book has been a journey. It began in the spring of 2016 as a short story about a man who travels to the Sumerian netherworld and returns as a mitu, or a dead man. But, as is so often the case, secondary character began to petition for more time on the page, and the man’s daughter emerged as the protagonist, and I developed a theme of power dynamics—oh, and there’s a talking crow!—and, and, and. Nearly two years later, I’m left with a full-fledged Mesopotamian ghost story, which will be finished shortly before the new year. Remarkably (to me, at least), it’ll be the tenth book I’ve written in sixteen years.

But how about yourself? Are you at work on anything new?

It sounds like you’re working on a really great book! I love how the act of writing a novel teaches you what’s actually important about it, as your example of the daughter gaining ascendancy, and as Barbara did in QOS, starting out as a peripheral character and ending as my favorite character. I have an idea for a new book whose form is just coming together in my head—I always like to start with a form and then fill it in—and I think it will have parts of a “con” (confidence job) that veers into the supernatural—a kind of horror story for the 21st Century.

Something to look forward to! On that note of anticipation, thank you for taking the time, Michael—I feel lucky to have gained a deeper appreciation for Queen of Spades and to have learned a bit about your writing process. We can all look forward to whatever you write next.