"From the novel’s outset, Indian Horse announces itself as the story of a generation, not merely of a single individual’s life": Steven Wingate on Richard Wagamese's final novel.

The Canadian novelist Richard Wagamese (1955-2017), an Ojibway originally from northern Ontario who settled in British Columbia, was only beginning to establish his name in the United States at the time of his death. Milkweed, which published American editions of his novels Dream Wheels and Medicine Walk in 2016, has now published Indian Horse, a tale of forced assimilation and redemption, which will add weight to his posthumously growing reputation.

Originally released to great acclaim in Canada in 2012—Indian Horse won the inaugural Burt Award for First Nations, Métis and Inuit Literature—the novel lays bare the life of a mid-20th century Ojibway boy, Saul Indian Horse, who falls into the clutches of Canada’s forced assimilation policy and notoriously abusive residential schools system for indigenous youth. His parents are driven to despair, and into the deep Ontario woods, by the death of a their oldest son, Saul’s brother, and the loss of their daughter to the Zhaunagush (white people) and their schools. They eventually leave eight-year-old Saul with his grandmother Naomi, who spends a summer and fall teaching him traditional ways of being in the wilderness until winter forces them toward civilization.

When Saul’s grandmother dies trying to keep him from freezing to death at a railroad depot—a scene reminiscent of Wagamese’s own life—Saul crosses over from the Ojibway world into the Zhaunagush world. While Wagamese himself entered foster care with a family that actively squelched his indigenous identity, the fictional Saul goes off to St. Jerome’s Indian Residential School. These institutions, sponsored by the Canadian government and typically run by churches, were part of a brutal and continuous effort to eradicate indigenous culture from Canada. (You can learn more about the assimilation program in this report from the National Centre for Truth and Reconciliation.)

The topic of residential schools is highly resonant in Canada; a decade ago, then-Prime Minister Stephen Harper issued an official governmental apology to their victims and survivors. Reading Indian Horse, it is easy to see why. The Catholic priests and nuns in charge of St. Jerome’s run it like a prison camp, and the only “schooling” visible is the forcible subjugation of indigenous identity to the Zhaunagush way of life. Most students break under the systematic attempt to destroy and replace their identity, and many die. One form of punishment is a tiny isolation cell known as the Iron Nun. 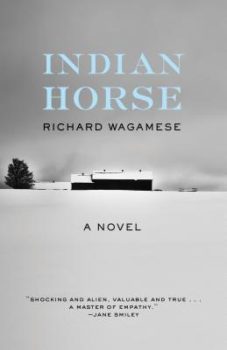 Saul Indian Horse, however, manages to escape through ice hockey, a game at which he proves to be a prodigy. Hockey earns him the opportunity to leave St. Jerome’s and live with an Ojibway family in the mining town of Manitouwadge, where he stars for a traveling team known as the Moose. The experience of forced assimilation never leaves Saul, though, just like it doesn’t leave the Kelly family or his teammates. Everyone around him, it seems, has been scarred by a process that, as Wagamese wrote elsewhere, “tried to scrape the Indian out of their insides.”

As the Moose develop as a team, first competing on the indigenous circuit and eventually playing against  Zhaunagush squads, Saul simultaneously finds a personal identity and realizes how much the white world doesn’t want him to have one. Rather than respect and admiration, the team’s success earns them hostility and violence from the whites they encounter in their travels. “They think it’s their game,” Saul says more than once, and he begins to feel deprived of the very thing that seemed to earn him freedom from being punished for his heritage. Eventually Saul is recruited to play major junior hockey in Toronto—one step away from a professional career—but the social tensions of being an Ojibway in a Zhaunagush world ultimately destroy his love for the game and unleash more than a few demons inside him. Jettisoning himself from the sport that seemed so eager to save him, Saul develops massive alcohol and self-isolation problems that lead him to a wandering life of manual labor jobs. After a decade he finds himself in rehab, and the novel presents itself as his attempt to write down his life story as an assignment from his counselor.

From the novel’s outset, Indian Horse announces itself as the story of a generation, not merely of a single individual’s life. Saul’s journey of healing belongs not only to himself, but also to the others who shared the attempted destruction of their culture. He narrates in the opening chapter:

When I was born people still talked this way. We had not yet stepped beyond the influence of our legends. That was a border my generation crossed, and we pine for a return that has never come to be.

In this sense, Saul Indian Horse is an indigenous Everyman. Yet beyond the national (and even international) issues surrounding the historical legacy of forced assimilation programs, it is the intimacy of Wagamese’s telling that transforms the story from an abstract experience to one that lives and breathes; the injuries Wagemese recounts are made material in the skin and language of his characters.

Part of the depth of these injuries has to do with the fragmentation of self that occurred as part of the assimilation programs. Saul comments on having to inhabit two worlds at once. “I always remained within the borders of this world,” he tells us, “yet I had the eyes of one born to a different plane.” His grandmother’s teachings—as well as the visions Saul experienced in her company—remain with him as a core identity that is badly shaken by his forced assimilation, yet never destroyed. Hockey itself proves to be a double-edged sword, since it is not only Saul’s avenue to an apparent freedom, but also the means by which he learns just how tenuously he occupies his place in Canadian society.

Wagamese accomplishes a similar bifurcation of perspectives by utilizing both the straightforward Zhaunagush descriptiveness of the journalistic trade (Wagamese received a National Newspaper Award in Canada in 1990) and the more free, lush voice of a man who has visions. His prose is at its best while exploring two opposing poles: Saul’s immersion in the physical world and his despair over his place in Canadian society as an Ojibway. At points these two come together in scenes of marvelous power, particularly his return visits to St. Jerome’s and to the lake where he had lived with his grandmother.

For American readers, who can easily come to the conclusion that native and indigenous writers in North America are represented only by a small handful of highly publicized American authors, Wagamese offers a window into life across the border. Readers of Louise Erdrich, herself of Ojibway heritage and steeped in that linguistic and cultural tradition, will also find in Wagamese a kindred spirit to hers. Indian Horse unflinchingly portrays the troubled lives of people trying to protect their identities from eradication. In laying bare Saul’s truth, Wagamese honors those in similar predicaments whose stories remain untold.