"Artful realism lends his account an appealingly honest intimacy and immediacy as the quotidian is scrupulously examined."

"With intelligent probing, sinuous prose, and considerable charm, this Bildungsroman charts his journey, an interior trip to the core of being a compassionate human in the twenty-first century": Julian Anderson on Johannes Lichtman's debut novel.

The protagonist in Johannes Lichtman’s debut novel, Such Good Work (Simon and Schuster), a late-twenty-something adjunct writing teacher in North Carolina, is overwhelmed by pain—his own and the world’s. Until recently, Jonas Anderson’s favored solution has been to self-medicate, but, hitting bottom on pain-killers, he is determined to remain drug-free. When his teaching comes to an ignominious end, he enrolls in literary studies at the University of Lund in southern Sweden. As a dual citizen with a knowledge of the language, he will be able to study at no cost. More important, he hopes to avoid back-sliding into addiction. With intelligent probing, sinuous prose, and considerable charm, this Bildungsroman charts his journey, an interior trip to the core of being a compassionate human in the twenty-first century. 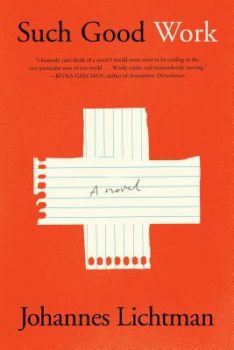 Most of the novel takes place in Malmö, a city close to Lund but grittier, with a large population of recent refugees. Set in 2015, the novel intertwines mention of news stories about the on-going refugee crisis with Jonas’s daily life in Sweden. A section begins, for instance, “In early September, Alan Kurdi’s body washed up on the shore of Turkey, then up on the front page of every newspaper in Europe.” Jonas stares at the photograph, then turns away, explaining that, “Looking would just make me feel bad and nothing would change.” Instead, he recounts, “I opened an NBA preseason preview. By the end of the article, the awful feeling was gone.” Scenes read like meticulous journal entries as Jonas both records his urge to help and questions his own motives and capacity, unsparing when his attempts fall short. This artful realism lends his account an appealingly honest intimacy and immediacy as the quotidian is scrupulously examined. Jonas is deeply serious about finding meaning and connection.

He is also alert to the irony that he is himself a kind of refugee, struggling to adapt. Despite dual citizenship and adequate Swedish, he feels silenced. He is no longer able to write fiction, and having learned the language from his mother, discovers “when [he] spoke Swedish, [he] sounded like a middle-aged woman.” He is struck by an Iranian friend’s tales, related in English, of being called a terrorist, someone who despite the difficulty of the foreign language—or, perhaps because of it—is able to express himself in a way that Jonas can’t seem to muster. He notes:

I didn’t know whether to chalk up his directness to the difficulty of maneuvering around emotions in a second language or to the lack of the need to maneuver when you have something substantive to say. Either way, I was impressed and a little intimidated–to say something so personal, so directly.

Part of his journey, then, is learning not only to communicate in contemporary Swedish, but also to express himself openly in any language.

Jonas discovers that just as he cannot speak easily, he is under-informed about Swedish politics. To work out which of the many political parties he might align himself with, he takes some on-line quizzes. He reflects:

After eight quizzes (– one of which asked if I would ever consider taking the last cookie for the plate at fika – ) I still couldn’t find a party that fit my beliefs. […] I found that I didn’t know, specifically, what I believed.

So much so that standing in line to vote on the day of the election, he breaks into a sweat of uncertainty. And when he is turned away because of a bureaucratic problem, his relief is palpable. Like someone between cultures, he has been saved from declaring a preference, or committing himself to a choice, in a pattern he both reverts to and works to break.

Jonas’s lack of proficiency in both language and politics extends to his inability to read other people. The recent influx of immigrants from the Middle-East has given Malmö a reputation for violence, and, new to the city, Jonas finds himself locked out of his building one evening when his key card fails to function. Standing in the cold, hoping for rescue, he grows anxious when three young men approach, speaking loudly in Arabic. He has heard about muggings and mentally prepares to protect himself. Then, one of the young men asks him in Swedish what the problem is and makes a quick phone call in Arabic. Soon a man inside the building opens the door for Jonas, who rides the elevator up with his rescuer in an awkward silence, unable to find the right expressions of gratitude and all too conscious of his prejudices.

As he settles in, resisting painkillers and making some friends, Jonas feels an increasing need to help in the country’s refugee crisis. It is Malmö’s most urgent problem, and it also resonates with Jonas in his own flight from the US and addiction. First, with touching comedy, he tries to give money to a newspaper vendor, who is insulted. He offers socks and a pair of boots to refugee boys at the railroad station, who are baffled but polite. He buys notebooks for the refugee boys with whom he volunteers to teach Swedish, passing them off as a donation, then realizing he had no clear objective for the notebooks.

Gradually he learns that helping can be more complicated than impulsive generosity. When he reads about a local Swedish girl who has gone to Greece to help with the refugee crisis, he feels both envy and irritation, imagining that an untrained volunteer with no knowledge of the languages involved would mostly impede the real work. Later, at a power point presentation on volunteering, in a room dominated by women, Jonas finds himself sitting at a table with the only other unattached man: “He was fortysomething and heavyset, but confidently so, like he owned a boat. He removed his leather gloves but kept on his designer peacoat and leaned back with an air of authority.” This confident white man, involved in local theater, has come to suggest that the refugees join in a discussion group about their status as refugees. Politely, the presenter suggests that other kinds of help are needed: foster homes, for instance, and a way to familiarize the boys with Swedish people and Swedish life. Jonas is awkwardly aware of his own lack of qualification, that his goodwill is of no practical value, whereas the man is offended. Jonas suspects he had half-hoped to gather material for his own theater pieces in the process and asks him directly, “Who is it that you’re offering to help?” He goes on to reflect:

The man stared at me for a second, harrumphed, then loudly backed his chair up and walked out. […] It occurred to me how difficult it was for men to join in the day-to-day slog of helping strangers without the promise of attention and praise. The thought made me uncomfortable.

Jonas’s own attempt to connect with a refugee from Afghanistan briefly blooms then fizzles. Touchingly eager to befriend Aziz, he invites him to his apartment to cook a Swedish meal. The evening goes badly, though. Aziz is overwhelmed and angry in a way that Jonas, without knowing particulars, empathetically understands. Soon after, Aziz is moved to another city to begin his schooling, and Jonas realizes his attempts at friendship have come to nothing. It seems no coincidence that the boy’s name recalls Dr. Aziz in A Passage to India, a novel famously concerned with cross-cultural connection, and Jonas’ reaction to Aziz’s departure is not the pleasure he hopes for, that of a disinterested advocate, but is rather that of a bereft friend.

Jonas’s Bildungsjahr progresses with a pattern of thesis and antithesis, as one assumption is undercut by a conflicting point of view. In the final scene at a New York airport–the only moment in a story that has progressed with the fits and starts of real life that feels fictionally shaped by coincidence—Jonas encounters a former student from North Carolina. Divorced and working as a flight attendant, she seems to have forgotten that she once filed a complaint of incompetence against him and instead remembers his class with enthusiasm. Exuberant about life, she has an endless list of things she wants to do. When she hears that Jonas has come back to officiate at his best friends’ wedding, she effuses,

“That’s so nice.” She looked as though she might cry.

And it was nice. [… ] It was nice to be standing there with an old student, seeing she’d grown into a person that I could never have predicted, with so much to do that she’d have to live forever to find time for it all.

In a novel ever wary of grand claims, Jonas has arrived at something approximating happiness, and, like his student, he is ready for lift off. He has learned something about the limitations of good work, has helped a little, has resisted painkillers, and is eager for life.

Early on, a girlfriend, breaking up with Jonas, says, “It feels like I’m waiting for you to decide what you want.” And the Swedish translation of the novel, titled Något Måste Beslutas (“Something Has to Be Decided”), perhaps better captures this central preoccupation of the book. For throughout the novel, small events lead forward to other small events, and despite the lack of dramatic conclusions, the stakes feel high as Jonas, unbuffered by oxycodone or ironic quotation marks, opens himself to heartbreak, decides some things, and finds his life. 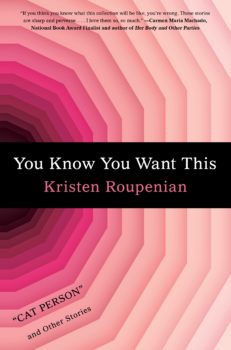 Surprising Things Can Happen: An Interview with Kristen Roupenian