River Under the Road, by Scott Spencer

"The characters personify competing ways of getting ahead in American culture": Mari Carlson on Scott Spencer's latest novel, River Under the Road, out this week from Ecco.

In Scott Spencer’s latest novel, out this week from Ecco, the titular “river under the road” is a metaphor for that “aware[ness] of what’s going on with our species, with our whole world.” We readers are made to feel the mighty river coursing through the story in a series of parties the characters attend. 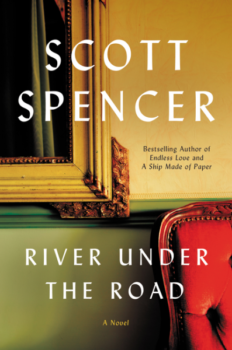 Starting in Chicago, with a moving-away party for one of the main characters, Thaddeus, and ending on the river, outside New York city, with a naming party for the other main character Jennings’s new business, in between are birthday parties for Jennings’s wife Muriel and an auction party for Thad’s wife Grace’s art. We travel to California and Arizona, hobnobbing with bigwigs and belching with lowlifes. But whatever the setting, the invitations—pictured as cards at the head of every chapter—mount like a never-ending game of keeping-up-with-the-Joneses. The series of parties reveal the palpable pressure the characters feel to get ahead.

Over the course of the ’seventies and ’eighties, the characters personify competing ways of getting ahead in American culture. On the one hand, Thaddeus is a writer who makes it big in Hollywood. Despite his Trotskyite upbringing, his new money buys his river property and luxuries he never imagined. Meanwhile, Grace questions whether art is meant to lead to riches. On the night of their wedding, another of the parties, she says, “Art is the real thing, or better.” She promises to give Thaddeus her secrets and to keep his, and to make happiness their goal above all others.

On the other hand, Jennings’s way of life, like that of others living along the river, is threatened by the new money infiltrating their home. He plans to get ahead both installing and removing asbestos. He cares about jobs, livelihoods, over and against environmental interests about which only those who have enough can care. Muriel, devoted to Jennings for getting her out from under her father’s policeman’s hand, keeps him well nourished. The two couples become more entwined than they anticipate when they first meet at Orkney, the property Thaddeus and Grace buy, maintained by Jennings’s father, over the course of three owners. 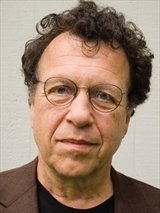 Neighbors, the couples are also pitted against each other due to forces beyond their control. While Thaddeus is gone more than half the time pursuing producers for his screenplays, the biggest of which uncovers American involvement in Iran through a fictionalized Arab setting, at home the politics of the river heat up to a boiling point. Things come to a head when Thaddeus, finally home again, brings chicken from a new place in town to a fundraising party given by river-folk. No one will eat it because it represents the town’s gentrification, though Thaddeus doesn’t realize how he sets himself apart by his act. He’s the chicken no one wants, the PC-talking, money-grubbing artist his neighbors—and his wife—can’t stand. When he realizes this, the political becomes personal:

And by all means put on hold the sense of impending doom that seized Thaddeus the moment his plane touched the runway at LAX, the sense that here was a place that one day was going to blow up or burn down or be swallowed whole, and when it happened no one in all the world would be terribly surprised—sad, yes, horrified, naturally, but there would not be the slightest element of surprise.

Foreshadowing? You decide. It’s worth the pain we feel with the characters to find out.

An Interview with Julie Langsdorf 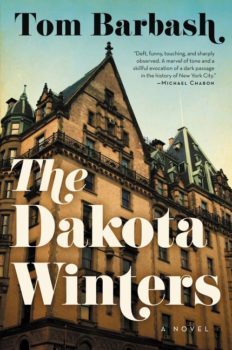 The Dakota Winters, by Tom Barbash