"Motherhood swallows Rebecca Stone, but in That Kind of Mother she emerges stronger because of her struggle to be seen."

When She Becomes One: Mother Knows Best

"Alam’s novel asks readers to examine the relationship between how we construct and project 'motherhood' as an identity with notions of the limitations and constrictions of this identity."

I won my first writing contest in third grade for Mother’s Day. My winning entry read: “I have the best mom in the world because I have the best dad in the world and the best dads pick the best moms. The end.” It was published in my hometown newspaper, the Hannibal Courier Post, and I was awarded a ten-dollar gift certificate to the Ponderosa Steakhouse. My mother was impressed by the free meal, but the prize corrupted me. I learned that my words had value and that mothering could be manipulated.

Three decades later, with two kids of my own, I know a lot more about mothering and writing. However, many of the ways we discuss mothering—“life changing,” “self-sacrificing,” “a blessing”—remain superficial, which is why Rumaan Alam’s latest novel, That Kind of Mother (ECCO), is refreshingly complicated. The story is about female alliances, even unlikely ones. Rebecca Stone, the protagonist, impulsively hires her hospital lactation consultant, Priscilla, to be her personal nanny. As a privileged white woman aspiring to be a poet, Rebecca realizes how little she understands about Priscilla’s place as a hired woman of color in their shared house and culture. The relationship provides Rebecca the opportunity to navigate cross-racial adoption and challenges her definitions of motherhood. Though Rebecca has family of her own nearby, it is Priscilla who becomes her model for nurturing and her lifeline to intimacy, underscoring the many different ways we construct family.

The creation of family is perhaps at the forefront of this novel because as an adoptive father of two black children, Alam has faced many of the uncertainties Rebecca wrestles with. During a conversation I hosted during his book launch at Politics & Prose on Mother’s Day, he shared with our audience that he’s learned to turn the tables on the inquisitive boundary crossing of strangers with a question of his own: “Why do you need to know?” Rebecca Stone illustrates how much we expect of modern parents, how little we reward and provide support for, and most damaging, how much we blame and judge. 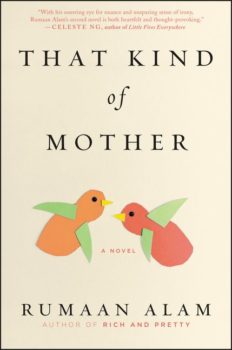 In her review of the book in the Washington Post, which was published days before our D.C. talk, Lisa Page wrote, “When you become a mother, you start to disappear. Your body becomes someone else’s. Your priorities change. Your existence is suddenly tied up in breast-feeding, dirty laundry, the changing table. Even you can’t see yourself.” In That Kind of Mother, Rebecca’s sister, Christine, is one of the first to notice her fade. After a suburban Halloween night in Silver Spring, MD, Christine worries that her sister’s recent adoption has overwhelmed her and led to depression. “You can’t disappear into motherhood,” Christine warns. “It’s not good for you.” Rebecca realizes motherhood has changed her yet she embraces it: “This was the look of motherhood. But it was offset, or compensated for, by something else, a faint glow, a vague contentment.” And it is through the insider and outsider view of motherhood that Alam creates an authentic portrait. Both are true. Motherhood swallows Rebecca Stone, but in That Kind of Mother she emerges stronger because of her struggle to be seen. Through her journey, a larger commentary on motherhood and its transformative nature emerges.

Specifically, Alam’s novel asks readers to examine the relationship between how we construct and project “motherhood” as an identity with notions of the limitations and constrictions of this identity. Yet it doesn’t have to be. I didn’t start really writing until after I’d given birth. Mothering split open my creativity in a way I hadn’t expected. The pieces of me shifted and as I learned to take care of another person, I made space for art for survival. The boredom of staying home with a baby coincided with a flood of words that came so fast that I won my second writing contest before the baby’s first birthday. I almost missed the prize announcement, though, because, without a nanny or family help, I rarely found time to shower much less reply to email. So while winning my first writing contest for Mother’s Day may have validated my voice in an important way, it took me decades to find it again, as well as to begin to understand what makes a true parent. Rebecca Stone undertakes a similar journey of discovery, her path perhaps best captured by Robert Frost’s sentiment when we wrote, “I can see no way out but through.” It is the undertaking, after all, not the state of being that truly defines motherhood, a notion Alam captures marvelously in this book.