"Writing started as listening, hearing my characters speak to me and to each other—the sound of the story."

A Late Invasion of the Territory of Words: Recording the Voices

"Along the way, listening to writers at my dinner table speak of their work, their contracts, their advances, their sales, their ratings on Amazon, their competitors, etc, I came to realize how much it takes to carve out a career as an author, to live by the pen. At my present age, none of these concerns are mine." Elena Delbacno discusses the perks of publishing later in life.

There’s a famous, if macabre, old joke about a couple in their nineties who come before a judge to ask for a divorce. The judge says, “You’ve been married for seventy years. Why are you asking for a divorce now?” The couple responds, “We couldn’t upset the children. We had to wait for them to die.”

The deeper truth of the joke concerns the desire to do no harm, rock no boats—to put forth your story only when confident that the moment is right and your perspective is mature, and that those you love are competent to read your fiction as fiction.

The Silver Swan (Other Press, 2015), my first novel, is the final product of many decades during which I worked it over, changed the story, created and destroyed characters—all in my head. During those years, for many reasons, no words emerged on paper.

I had been surrounded by writers my entire adult life and I felt that this territory, the territory of language, was sufficiently represented in our universe. I’d had a fulfilling career teaching writing to graduate students of public policy at the University of Michigan for thirty years, working as a psychological counselor for a decade before that, at Bennington College, and earlier as a social worker in New York. In addition, I’d immersed myself in the development and administration of two premier writing programs, founded by my husband, the writer, Nicholas Delbanco, and raised two daughters, both professional writers 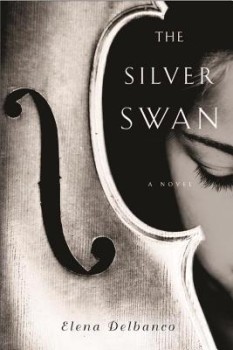 I hadn’t always longed to write; my creative interests had always been in music and the visual arts. But as the years went by, I felt drawn to writing this particular novel. The story I wanted to tell had autobiographical aspects—not the plot per se, but the emotional content at its core. My father was a great cellist; the universe of classical music and rare instruments had been my own in childhood and as a young woman. This was where I felt most at home. Writing started as listening, hearing my characters speak to me and to each other—the sound of the story. For many years, I found sufficient pleasure in “playing” the book in my head.  Perhaps this is one of the reasons that the accents of my characters became so important to me. I heard the cadences and could not dispel them.

These voices came from people in my life over time, but nowhere did I find my place among them, nor did I want to be a character in my book, to write about myself. I didn’t want to use the first person or write a novelistic memoir. I did want to capture as best I could the world of classical musicians and rare instruments, the fierce determination, almost obsession, required to excel musically, to find the instrument of your dreams and the many sacrifices made by those who wish you to succeed.

Finally, a few years ago, on sabbatical, nearing retirement and living in a cottage on the north shore of Hawai’i, with no art supplies, I suddenly found I was ready to begin. I wrote several hundred pages in a little over a month, before being suddenly summoned home to deal with a parental crisis. The work was exhilarating, but the results were mixed—perhaps too generous a description. The plot sprawled and ran into several dead ends, the hurried writing was erratic and I was hedging my bets about the personal nature of the book. I had spent thirty years telling my graduate students that the real work of writing lay in disciplined revision. When I looked at the baggy monster I’d created, I knew I’d have to live up to my own dictums. But, for the moment, time was not on my side. I resumed teaching and put the novel on my desk.

Over four years, I returned to the novel and set it aside again and again. But each time, I learned something, made improvements and wrested the manuscript into the book I had always wanted to write. I had excellent editorial help from my publisher, my editor, my agent, and, of course, my husband. I needed guidance, the eyes and advice of others. And down to the last moment before The Silver Swan went to press, I continued to tweak it, find the word I had wanted but failed to remember.

It’s definitely sui generis to be a debut novelist in one’s seventies. It’s often confusing to reviewers, book stores, and interviewers, who imagine me to be a young MFA student, fresh out of graduate school. The surprise has produced some very amusing situations. But I’m by no means alone; I join a category of older authors such as Harriet Doerr and Laura Ingalls Wilder, who now seem like spring chickens, having first published in their early sixties.

Along the way, listening to writers at my dinner table speak of their work, their contracts, their advances, their sales, their ratings on Amazon, their competitors, etc, I came to realize how much it takes to carve out a career as an author, to live by the pen. At my present age, none of these concerns are mine. I’m simply hooked, on the fascinating process of putting words together on paper, telling a good story. I suspect I may have another book to write; I’m beginning to “hear” a new set of characters, but the plot itself is unformulated. The Silver Swan has recently appeared, under the good auspices of Other Press, and although the public aspects of producing a debut novel are a little unnerving, I am happy to have written The Silver Swan, thrilled to publish it. Fortunately—and unlike that old joke—my family has lived to join the celebration.