Book of the Week: A Thread of Sky, by Deanna Fei 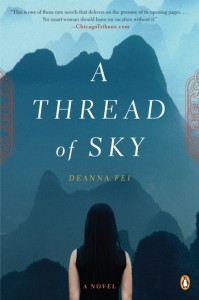 This week’s featured title is Deanna Fei’s debut novel A Thread of Sky. Fei was born in Flushing, New York, and has lived in Beijing and Shanghai. She received her MFA from the Iowa Writers’ Workshop in 2003. The following academic year she spent in China on a Fulbright grant, conducting research for what would eventually become this novel. Published last year by Penguin, A Thread of Sky was a New York Times Editors’ Choice and an Indie Next Notable Book. It has just been released in paperback.

In the introduction to her recent interview with the author, Kate Levin writes:

There is a moment in A Thread of Sky—the story of six women, family members, who take a package tour of China—in which one of the characters finally confronts her grief over her dead husband, by way of a very mundane act. I’ll resist saying anything more about it; I don’t want to rob other readers of the experience of having their breath taken away by the deep sadness and utter simplicity of the moment. The same passage that knocked the wind out of me also knocked some sense into me. This is what writing is about, I remember thinking: illuminating emotional truths, exploring interesting questions about people and the world—above all, forging a connection with your reader. This is the work that makes those anxieties about “being a writer,” however inevitable, seem beside the point. Nobody ever moved anybody by being a writer. Only by putting words on the page that ring true.

To read the rest of Levin’s conversation with Deanna Fei, click here. In it, Fei discusses the role cultural identity plays in a writer’s persona and work, the value of unknowability, the secret to writing great sex scenes, the reason she watches Jersey Shore—and more.