Book of the Week Giveaway: The Sherlockian, by Graham Moore 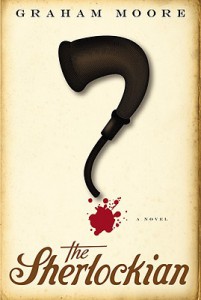 Each week we give away several free copies of a featured novel or story collection as part of our Book-of-the-Week program. Last week we featured the Winter 2011 Issue of Glimmer Train Stories, and we’re pleased to announce the winners: Rose White, Kristin Pedroja, and Lowell Mick White. Congratulations! Each will receive a copy of this new issue, signed by the editors.

This week we’re featuring Graham Moore’s The Sherlockian. Out this month from Twelve, the novel is based, in part, on a true story: In 2004, it was announced that the missing journal of Sir Arthur Conan Doyle had been found by the leading Sherlock Holmes scholar. Yet before he could present this artifact to the public, he was found murdered and the journal gone.

Managing Editor Lee Thomas tackles the icon character of Sherlock Holmes and the cult-like devotion that Doyle’s writings about the talented sleuth have inspired over the last century in her essay “The Mystery of Sherlock Holmes: The Pleasure and Nuisance of an Enduring Character.” Of Moore’s treatment, she writes:

Among The Sherlockian’s many pleasures are not one, but two, traditional mysteries. The first begins at a modern Sherlockian conference at the Algonquin Hotel in New York when one of the members turns up strangled with a shoelace, and the hunt for his killer, and a missing volume of Doyle’s diary, ensues. The second follows Arthur Conan Doyle and an incredibly charming Bram Stoker through the final days of Victorian London, on a tangled adventure that begins with a package bomb. The mysteries alone are entertaining, but what Moore managed to pull off is the omnipresent ghost of Holmes – who hovers above Doyle and Stoker, the Sherlockians, and the reader.

For more on The Sherlockian, the persuasive power of mysteries, and the sometimes troubled relationship between authors and their characters (Doyle once famously ranted to friend and Dracula creator Bram Stoker of Holmes, “I hate him more than anyone! If I had not killed him, he certainly would have killed me”), please read this wonderful essay by Lee Thomas.