"But the hush didn’t last long. As playful in person as she is in her prose, Russell had the audience bubbling right off the bat. "

Editor’s Note: The Hopwood Room Roundtable is a weekly event in which visiting writers of the Helen Zell MFA Program in Creative Writing discuss their work and the writing life with the University of Michigan’s student body, faculty, and the local literary community. 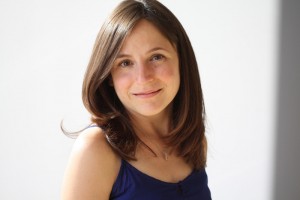 Inside the Hopwood Room, friends and colleagues caught up over coffee and cookies, discussing avalanche survival tactics and personal rules about never living in alligator-populated states, awaiting the main event: an in-the-flesh Genius. When Karen Russell—novelist, short story writer, MacArthur Genius Fellow, and probably the most easy-to-be-around and gracious person you’ll ever encounter—entered the room, which was packed to the point of people squeezing in to sit on any available floor space, the crowd went hush. But the hush didn’t last long. As playful in person as she is in her prose, Russell had the audience bubbling right off the bat. And while the discussion never zeroed in on writing humor, Russell fielded a range of questions from finding and keeping good first readers to the evolution of writing routines, from the inception of her stories to the endings of them.

After laughing our way through Russell’s origin story as a writer—“I had this deal with my mom. I liked really weird and dark stuff, and the way that my mom dealt with that was to say that I could get a Ray Bradbury or a Poe or a King or some pulpy trashing thing, if I got a Brontë. So I could get Cujo, but I would have to get Jane Eyre, too”—the discussion delved into a difference between genre fic and lit fic.

Q: The endings of your stories are not what we expect in what’s considered genre fiction because they open up, ending in poetic ways on metaphors, opening out into a second possible imaginative world. Can you talk a little about how you think about structure and endings?

Russell looked pleased throughout the duration of the event, but as this particular question was being asked, she had a smile like it was the best day she’d ever had.

A: Bless you! Thank you so much. That’s my best vision of how the thing could work, and I’m sure it fails more often than not, but those are really my favorite endings. And they are different from genre endings, which tend to satisfy a question that often isn’t the more interesting question. But I forget about that sometimes because there’s a pleasure to that, right? As a reader, I’m like Is he gonna kiss her? Is he gonna to get the gold? I’m dying to know. I don’t want this bullshit about we’re all haunted, whatever!

It’s in those endings, the endings with the we’re-all-haunted effect, the endings that leave us feeling a sense of recognition, that we as readers find ourselves complicit in the outcome of the story. And conversely, when an ending explicitly answers the story’s question(s), our participation in the story tends to end with the last line. As a reader, it seems Russell is happy going both ways—King to Brontë. But as a writer, her style leans more toward the former. She cites Bradford Morrow’s O Henry Prize winning story “Lush”:

It’s about this alcoholic, and a lot of the story treats his addiction and recovery and the dueling pressures of those two things. It ends in a restaurant. It’s such a simple ending. He forgets to cover his glass with his hand, and the waiter automatically fills his glass. The way he [Morrow] structures this last sentence is unbelievable, just the physics of the sentence…. It starts out, and he’s joyful, he’s relieved, he’s like I’m so glad that’s not my life anymore, and somehow by the end of sentence you have no certainty, as a reader, that he’s not going to reach for that glass and take a sip. The thing is so freighted on a sentence level that you can feel the pull of both outcomes. It’s completely unsettled. And I like that so much more than if he’d ended by saying to the waiter, “No, no, good sir! I embrace my new life of sobriety.” So I admire that one a lot. As a writer, it’s hard to earn an ending like that.