"Writing about celebrities, writing for celebrities… strangely enough, that was all very accidental."

#empathyforeverybody: An Interview with Maya Sloan

Ever wonder what it's like to keep your writerly identity while collaborating on novels with incredibly famous people? Maya Sloan can tell you.

I first got to know Maya Sloan on a day-long bus ride (along with FWR’s Editor-in-Chief Jeremiah Chamberlin) across Bulgaria in 2009. We were all fellows in the Sozopol Fiction Seminars program, sponsored by the Elizabeth Kostova Foundation, and both Maya and I were undergoing what is lovingly known as the “first book experience.” Mine had just come out and Maya’s—High Before Homeroom, a novel of teenage drug addiction, rehab, and family secrets—was in process with Simon & Schuster.

When we met, the words determined and driven didn’t begin to describe her. Five years later, she’s involved in some high profile projects that I would never have imagined if I hadn’t been web-stalking her career. She collaborated with TV-starlet sisters Kendall and Kylie Jenner (from “Keeping Up with the Kardashians”) on their young adult novel Rebels: City of Indra, which came out this June from Karen Hunter Publishing/Gallery Books, a division of Simon & Schuster. And now she has another collaborative project, The Rich Kids of Instagram (also from Simon & Schuster), written with the anonymous creator of a mind-blowing Tumblr site in which the uber-rich self-document their lives of opulence.

Though such subject matter usually makes my proletarian hackles stand on end, I found Rich Kids an oddly compelling read because it gives each of its rotating narrators—from a dissolute Danish royal to a gangsta-wannabe munitions heir—unique and extremely well-developed worldviews that suffuse their voices. It would have been easy in such a book to stand on the sidelines and take potshots at the .0001 percent. Instead, the authors get us inside the pathos and confusion of people we would rather think of as having no problems because they’re awash in money. In reading Rich Kids I found myself empathizing with people whose inner dramas I normally (in my everyday life) dismissed out of envy—a testament to Maya Sloan and her collaborators.

Maya and I talked about America’s celebrity fixation, authorial collaboration, and keeping true to yourself as a writer in the marketplace as she headed for a plum of a literary residency: a summer stint at the Jack Kerouac House in Orlando. 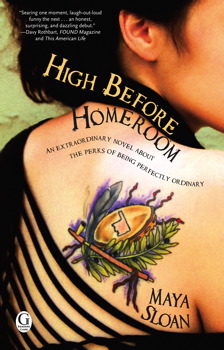 Steven Wingate: Celebrity is at the heart of Rich Kids. How did you—who grew up in Oklahoma far from the jet set—find yourself writing about it? I’m thinking both of your personal interest in celebrity and getting yourself into a position to write with celebrities (e.g., the Jenner book)? What’s the path from High Before Homeroom to where you are now?

Maya Sloan: Writing about celebrities, writing for celebrities… strangely enough, that was all very accidental. I was living in Los Angeles, adjunct teaching. I’ve taught at nine universities, which has been a great experience. While teaching at Pepperdine University, I was assigned a class focused on African-American portrayals on film. Pepperdine is a very white university, and as much as I love filmmaking and have strong opinions, I thought, “Shouldn’t I get black actors to talk about their experiences instead of a white Jewish chick from Oklahoma?” Since I taught in Malibu, I figured that that would be easy. It wasn’t.

My parents had moved into the same Philly apartment complex as Will Smith Senior, father to actor Will Smith. Naively, I went over and asked, “Would your son talk to my class?” and he said, “Hell, no. But you’re a writer? I’m working on a novel and could use your help.”  After collaborating with him for a year, he was offered a book contract from Simon & Schuster, but chose to self-publish. Six years later, the book is in a second printing and my husband Thomas and I wrote the screenplay version. Now the whole thing has been storyboarded and we are working with his son’s production company, Overbrook, to turn it into a motion picture.

One person who did say yes to my Pepperdine class was Broadway and television actress Sheryl Lee Ralph, who later asked me to help with her memoir. That went through Karen Hunter Publishing. Karen Hunter had done Kris Jenner’s book, and came to me with the Kylie and Kendall project.

So that is a roundabout way of saying I was open to being a working writer and took the opportunities presented to me, celebrity-related or otherwise. Making a living as a writer is the ultimate goal to me. And the greatest gift that came out of all this, beyond the books and chance to collaborate with extraordinary people, was Will Smith Senior. I’ve met his son several times, and he is a great guy…but his father is truly brilliant and I consider him one of my mentors. So there you go…the people behind the celebrities are often equally as interesting and dynamic, at least to me.

I suspect you’re not at liberty to say much because you wrote Rich Kids in cooperation with an anonymous author, but can you talk a bit about the collaboration process? Did you map things out together? Pass drafts back and forth? Use any collaborative writing tools? Take us into the meetings, if you can.

CAA set up a phone conference, and my first words to the creator of the site were “Are you Banksy?” The anonymous factor is serious business, so I can’t say too much here.  But I will say the creator of the Rich Kids of Instagram site took an active role in the process.  That’s as much as my NDA [Non-Disclosure Agreement] allows.

But overall, this was a very collaborative book in general. My husband, Thomas Warming, who is credited as the co-creator and illustrator, created this book with me. In the end, Rich Kids was a team effort.

Writing for and with such a diverse range of people has been a gift in that way. You learn to take criticism and be open to other opinions. Most importantly, you learn to set aside your own ego, which is essential when there are sometimes a lot of cooks in the kitchen. It is not anything they teach in an MFA program, and it sure isn’t for everyone. But I enjoy it as much as writing my own novels. Ultimately, it is a collective creative process.

One of the beauties and challenges of working with multiple narrators is that you have so many psyches to inhabit as the author. Which ones in the book did you find most fun and/or difficulty working with? How did the collaborative process complicate this?

Cordelia was the easiest. She’s from Texas, I’m from Oklahoma…so the dialect came naturally, as did the slang. True, I’m not a fundamentalist Christian poultry heiress, but I do understand her mentality.

Christian was also fun. He’s Danish, and so is my husband. I’ve spent time in Copenhagen, know many Danes, and had the best resource sitting right next to me. As for the royal aspect, I had an informant. A real life royal. Research was key to embody all these voices. I spoke with a movie industry heir for Phillip and drew on my own family background for Desdemona, the Broadway heiress. My grandfather was a Friar and medical director of the American Guild of Variety Artists, and my mother is a theatre professor. 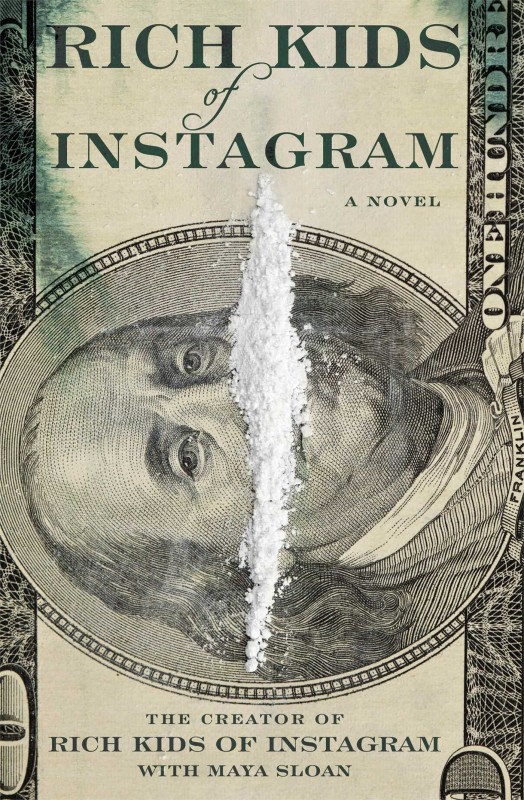 As for the whole world of Rich Kids, my husband and I went on research trips to the Hamptons. We crashed a lot of parties…snuck into the VIP tent at the Hamptons Classic and sat down at a table that cost twenty-five thousand dollars. We didn’t get busted because, in that world, it is unfathomable that anyone would do that.

In the end, I just tried to get these characters’ voices under my skin, and talking to real human beings with similar backgrounds was gold.

Todd Evergreen strikes me as a postmodern Jay Gatsby character—a connection you’re clearly aware of, since one of your narrators name-drops Gatsby late in the book. If Todd is a modern-day Gatsby, what does the way his story turns out say about our national psyche?

Gatsby is one of my favorite characters. I love the idea of reinvention, of self-created personas.

As for the social commentary aspect, it comes down to this: America is broke. That’s why we are fascinated. That is also why we are sickened.

All that said, the world of the book and the characters are two different things. You have to care about your characters, no matter how flawed they may be. Taking these characters beyond social commentary and cliché was essential. They may make horrible decisions, they may exhibit awful behavior, but they have to have humanity. I care about every last one of them. I have to. If I don’t, you won’t.

My very favorite passages in the novel come from Phillip Atwater, a lost, new-agey Hollywood kid. He talks about how everybody has a hustle, and how he wants “to flee that insatiable American need, the drive to feed on the charred remains of what was once called art.” Can you rap about that for a while?

I just let the characters speak; I’m never aiming for a social commentary. But I can say this about that character…Phillip is the moral center of the book. He has a big heart, is in search of meaning and authenticity. And his mother makes crappy Hollywood films and adopts children for the aesthetic value. So his version of “art” is the model he’s grown up with…and it isn’t pretty. As for me, I see the creation of fresh, innovative art every single day. From my friends, in galleries, in literature. So that is not my personal belief.

The whole narrative industry is turning toward open-ended stories, and Rich Kids struck me as extremely sequel-able. Would you work with these characters again? Do you have other collaborative works in the hopper?

Yes, there is the possibility of a Rich Kids sequel. And on a personal level, I’m not ready to let go of these characters yet. Not that they’d let me if I tried.

Having finished RKOI and Rebels, a lot of opportunity has come my way, and I’m extremely grateful for that. Those projects have allowed me time to work on my next novel, one I’ve been researching and writing for several years while simultaneously working on these collaborative projects. The book chronicles the Burlesque movement from the 1930’s to 1950’s, encompassing the showmanship, theatricality, and raunchiness of the form. Yes, there will tassels twirling.

This summer I’ll be in Orlando to live in Jack Kerouac’s house, an amazing residency offered to writers by the Jack Kerouac Project. I know, with Jack watching out for me, I’ll be able to finish in style.