All That Is, by James Salter

"Nostalgia, of course, is the most powerful form of lust: portable as your memories, infinitely rechargeable, and impossible to slake." Dan Keane reviews James Salter's new novel, All That Is. 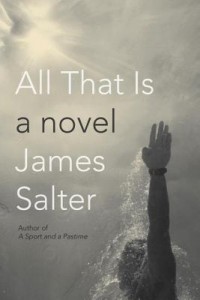 James Salter’s characters spend a lot of time in bed. Mostly they’re having transcendent sex. Occasionally they talk. Here’s a woman sitting up in bed, talking to her lover:

– I’ve had good sex since I was fifteen, she said.

The calm, considered happiness of these short lines kept echoing in my head during a long Salter binge I recently undertook to ease my disappointment in his new novel, All That Is, published this week by Knopf. At one dizzy moment – I’d been reading good sex since February – I decided the conversation must have appeared in All That Is. The retrospective tone seemed a natural fit for a book chronicling four decades in the life and loves of a navy man and literary editor named Philip Bowman. I went back and scoured the bedroom scenes of Philip’s every affair. Nightgowns are lifted. Pillows are strategically placed. Women appear to our hero as England, as camera tripods, as dying dogs. At one point Philip comes “like a drinking horse.” But no luck.

I finally found the scene in “Comet,” the opening story to Salter’s 2005 collection Last Night. The lines are spoken by a woman named Adele, “still beautiful” despite her “more comfortable outline.” She’s talking to her second husband, who, as it happens, is also a navy veteran named Philip. By Salter’s amorous standards it’s a tepid relationship: the two sit in bed reading, and Philip wears “a sport jacket over his pajamas.” Still, she has all this good sex to look back on. All things considered, it’s been a good ride. Philip, meanwhile, thinks the happiest moment of his own life was when he ran off to Mexico with his son’s twenty-year-old tutor, abruptly ending his first marriage. Yet Philip has no regrets. The way he figures it, the hot tutor – “youth burning through her clothes” – was a once-in-a-lifetime sexual opportunity. Adele retells this story at a dinner party (“Casanova here…”) and the table clucks with disapproval. Philip steps outside to be alone, and sees a comet streaking across the night sky. Adele follows, urging him back inside. “You can look at it tomorrow,” she says. Nope, he replies. “One time only.” 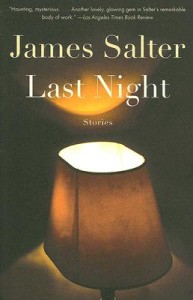 All That Is desperately misses the earthbound Adele. Without such a foil, Salter’s newest Philip wanders aimlessly through the book, chasing comet after comet with little cause to reflect and less pressure to change. Furthermore, Salter obliges Bowman’s lust by waving the short story’s “one time only” rule; All That Is runs 290 pages, and its every woman is an astral body. After coming home from World War II and hiring on with a publishing house, Bowman meets and quickly marries Vivian, a rich gal from Virginia, largely for the wonders of her blonde nether regions. Later, he travels to London and has an affair with Enid, the one with a body like England; sex with her gives him “the feeling of utter supremacy.” His next, Christine, “was given to him as a blessing, as proof of God.” There are more women, and younger, each interchangeably rapturous in the sack. Between bouts Philip tells his women what to read, corrects their French, and soaks up their adoration. (“That’s clever,” one coos. “Did you write that?”) Somewhere outside this dizzying meteor shower the tumultuous 1960s and ‘70s roll by, marked only by dinner table chat about a second gunman and “the women thing.” Later Bowman pulls a malicious stunt on one of his conquests, opening the door to some potentially rich complications, but the moment passes without much consequence. I am spoiling little to say the book ends sometime in the ‘80s with Bowman screwing another “miraculous” woman thirty years his junior who never dares mention the L-word, much less demand a ring. They plan a trip to Venice. The end.

I’m not against trips to Venice, or heaven help me, sex for sex’s sake. We should all be so lucky to pass a season or two living like Dean and Ann-Marie, the insatiable lovers who spend most of Salter’s greatest novel, A Sport and a Pastime (1967), having frankly gorgeous sex in various French hotel rooms. Their story, told in short, exquisite sentences that turn in the hand like expensive knives, argues that great sex can be cut free of love or marriage or cheating or babies or any of the standard plots. Great sex is great precisely because it removes us from the narrative clutter of our lives, stopping clocks and swallowing whole afternoons. The glare of the comet reveals broader contours otherwise impossible to see: “As his prick goes into her, he discovers the world.” The line does play a bit hokey now, what with the infinite porn cloud waiting behind this screen. We’ve come a long way – maybe too far – since the Great Male Narcissists, to borrow David Foster Wallace’s handle, first blew past all the old soft-focus stuff. But while Salter is a contemporary of Updike, Roth, and Mailer, he’s not a GMN, not quite. Where Wallace, in a 1997 review for The New York Observer, mocked Updike for waxing on about his protagonist’s “beloved genitals,” Salter at his best never loses his wonder at the whole proceedings. Dean, examining himself naked in a hotel mirror: “He discovers himself in her presence, that’s the thing.”

Such self-discovery is the other half of sex, the constellations we map after the comet passes. Sex is both an ecstatic break from regular life and an essential part of the stories that get us through the rest of the day. While Adele knows, and even the flippant Dean has come to suspect, that true happiness comes from learning to stay satisfied after you’ve been satisfied, Bowman can only find joy in the panting and the fix – whether it’s sex, the “inexhaustible pleasure” of reading, or even his own golden memories. There’s a telling moment late in the novel when our now sixty-something hero watches the snow fall outside the window of a Christmas party in Manhattan and flashes back to the “deep nostalgia and hopeless longing” of a holiday he spent at sea during the war. The moment auspiciously recalls Joyce’s “The Dead,” but there’s no such epiphany here. It’s simply an old man having nostalgia for his own nostalgia, back when it was really “deep.” (Salter himself is guilty here, too – the lonely wartime Christmas is played better in his first novel, 1956’s Hunters.)

Nostalgia, of course, is the most powerful form of lust: portable as your memories, infinitely rechargeable, and impossible to slake. It’s no accident that Bowman fondles the wartime longing to get through what would otherwise be a quiet half-page between one potential conquest calling to say she’s been snowed in and the next bright young thing appearing at his elbow. After a life of chasing comets, Bowman can hardly sit still long enough to see the stars. 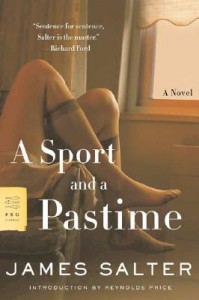 Unfortunately, the nostalgia of All That Is – Bowman’s? Salter’s? – also fuels an unreformed chauvinism writ in gestures large and small on nearly every page. For every generous gaze (“girls who lived in small apartments with clothes piled near the bed and the photos from the summer curling”) there’s a real headslapper (“She was lively and wanted to talk, like a windup doll, a little doll that also did sex”) and a dozen backhanded compliments (“She was the age when she could still be naked.”) The lascivious eye of the free-floating narrator drops into any passing man’s head to excavate random sexual fantasies but leaves Vivian almost completely opaque; the longest close-third female section in the book is a blowjob. There’s a grandfatherly racism, too, whenever non-white characters briefly appear. Mexicans are shifty. Asians swap R’s for L’s. Blacks are lazy or whores. We meet a couple that lived in the Caribbean awhile: “You could understand what slavery’s about,” the husband says. The reader waits for the wink, but all Salter gives us, three lines later, is a glowing description of the slavery sympathizer’s wife as “attentive to him, tolerant.”

The question we’re left with is why Salter – man’s man, war hero, master of erotica, bard of mountain climbing and downhill skiing – could tolerate such a vapid male lead as Bowman. I imagine Salter, now 87 years old, is long past exploring the rugged heroism of Hunters and Solo Faces (1979), both written in search of “a manhood that can never be taken away.” I’d like to argue All That Is deals in the more quotidian manhood of his short fiction and the 1975 novel Light Years (“Life is weather. Life is meals.”) The two models have very different endpoints: while shooting down an enemy plane confirms your manhood in a majestically unambiguous way, the rest of us mere mortals have to look back, swallow hard, and do the math ourselves. Alas, Salter has created in Bowman an empty hybrid of the two: all the swagger of a fighter pilot with nothing but publishing-house secretaries to shoot down. Having survived the war, Bowman takes his next four decades of manhood for granted. And when his comfy life of letters reaches a late moment of reflection, Salter chickens out. Bowman’s, he writes, was a “life beyond reckoning.”

Maybe this is in fact bravery on Salter’s part. Maybe he’s trying to tell us there really is nothing more to life than sex and dinner parties (Life is Meals is also the title of a 2010 cookbook-slash-memoir Salter wrote with his wife Kay.) But Adele, climbing into bed with a drink “the way she had done when she was twenty-five,” reminds us that Salter was once unafraid to match such hedonism with the high stakes of self-reflection. All That Is frustrates so not only because it ignores Adele’s insight but because it raises the unsettling possibility that Salter never thought much of her to begin with. Midway through the novel Bowman suffers a humiliating breakup. He wonders, briefly, if his lost love will “look back one day” on the times they shared. Maybe then, Bowman thinks, she’ll realize that “he was the one who truly mattered.” Nah, he decides. She’ll never look back. “That was a sentimental idea, the stuff of a woman’s novel.” 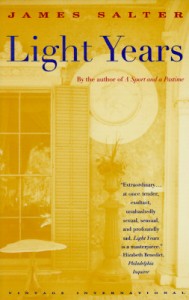