"Kalamujić takes readers on a journey of introspection, formulating an awareness for the realities of life, both pleasant and painful."

Call Me Esteban, by Lejla Kalamujić

Lejla Kalamujić’s Call Me Esteban, translated by Jennifer Zoble (Sandorf Passage), is a haunting and unguarded novel. The story follows a daughter grappling with her mother’s death and the aftereffects of war, as well as the even greater struggle of experiencing the two in unison. 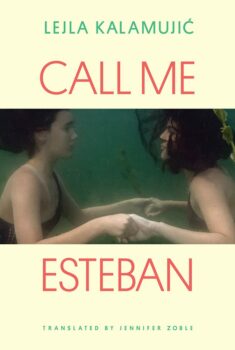 Raised by her father, who self-medicates to cope with his grief, Lejla never learns how to process trauma. Instead, she’s taught to escape. Though instead of using alcohol, Lejla dreams—she imagines her mother’s return, a life where families go to the beach. But each vision is a denial of the present. And eventually grief catches up with her.

My illness was diagnosed to be the consequence of losing my mother, my closest relatives, the house (two), and my sense of time. My mind had bizarrely signaled to me that this was okay.

Now in college, Lejla is admitted to a psychiatric hospital. Here, working with a therapist, she begins to find a way to exist in the present, something she had been unable to do prior. And as Lejla learns to nurture her emotions, she begins to form a relationship with a woman. In doing so, she further embraces the present and the new emotions and feelings she had previously not possessed. Or, had not recognized.

I couldn’t help but smile. “She . . . she just looks at me with her blue eyes, like none of it matters. She says it doesn’t bother her, that we can handle this.”

With therapy and her girlfriend’s nurturing, Lejla embarks on the final stage of her journey to acceptance by returning to her mother’s grave. There, she sees an old man she once knew as a child who often visited a nearby site. Years have passed and yet, the man holds onto his grief. When his loved ones stopped living, he did too.

He doesn’t say anything. He looks down, knowing it’s better not to inquire further. We say goodbye. He slowly proceeds to his plot. I watch how he weaves through the graves. He sits on the same bench and lights his cigar. I don’t know anyone who’s waited so long for death to come.

In witnessing the way the man has been possessed by grief for so long, Lejla realizes she no longer has to allow it herself. “It’s time to go,” she reflects. “It’s time.” And with that recognition, she experiences something like rebirth. Or, release.

Call Me Esteban is a discovery, the cultivation of one’s identity in the shadows of death and war. Kalamujić takes readers on a journey of introspection, formulating an awareness for the realities of life, both pleasant and painful. Her writing is poignant, poetic, at times bitter, and yet undoubtedly an extension of the influences that hone one’s identity.

Of these dimensions, grief holds the power to either suppress or ignite us, much similarly to love itself. Where grief and love intersect is where Call Me Esteban takes us, to the emotions that arrive when we truly process the hardships we endure.