Albena Stambolova's short, fable-like novel Everything Happens As It Does brings a whole new sensibility to the body of English translations from her native Bulgaria’s contemporary literature. 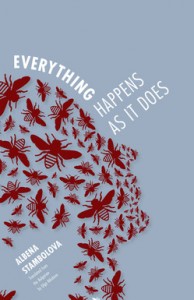 The new fiction that has come to America from Bulgaria in the past few years—as well as from Bulgarians living in America—has been written largely by men. Having covered quite a bit of it here at FWR (Miroslav Penkov, Zachary Karabashliev, Angel Igov, Vladislav Todorov), as well as in Rain Taxi (Milen Ruskov) and American Book Review (Georgi Gospodinov), I’ve been waiting for more female voices to join this chorus. For while there is no shortage of contemporary Bulgarian writers who pen fiction and who also happen to be women (Svetla Damyanovska, Kristin Dimitrova, Theodora Dimova, Emiliya Dvoryanova, Betti Fayon, Ivanka Mogilska, and Virginia Zaharieva, to name a few), due to issues of translation and distribution only a few make the leap into English translations, and fewer still reach the U.S. market.

Thanks, then, to Open Letter Books for publishing Albena Stambolova. Her short, fable-like novel, Everything Happens As It Does, translated by Olga Nikolova, brings a whole new sensibility to the body of English translations from her nation’s contemporary literature. While the men show some concern for what being a Bulgarian means, what Bulgaria as a nation means (or, in the case of Ruskov, what civilization itself means), Stambolova tells sinuous tales that snake through the lives of her characters, leaving the reader feeling privy to those deeply personal moments in which life make perfect emotional sense—even as it makes no cerebral sense at all.

With Stambolova’s characters, there are many such moments; she renders them with a deft, radically sympathetic patience that captures their sense of wonder whole. They tend—like her protagonist Boris, who would rather be around bees than people—to simply be wired differently than the rest of us, without the need for external coherence and comprehensibility that civilization pushes us to embrace. Maria, whom Boris marries (they produce a child together), is a self-contained cipher who makes men lose their wits. Her first husband, Philip, is a distracted scientist who can’t connect with their two children, twins Valentin and Margarita. They are all connected by the inability to connect.

Maria is the queen of the novel’s hive, and her lovers and offspring twine around her to give Everything Happens its interlocking structure. “Other people needed to think,” writes Stambolova. “Maria simply knew things.” She appears thusly to all those who encounter her, particularly the men who fall under her spell. Some of this capacity has been passed down to her daughter Margarita, of whom it is said: “After all, she and words traveled their journeys separately.” Everyone in Stambolova’s world weaves in and our of each others’ lives. They are loners, socially skill-less, who don’t respond to any pressures to succeed, or even to define themselves. Their quiet, nonchalant resistance to definition, in fact, is what unites them and gives them shape.

This is not to say that Stambolova’s characters don’t have emotional needs. They have needs aplenty, but lack any common language to express those needs to themselves or others. At one point Valentin “silently cursed his fate—to have been born an imperfect being, and lured, who knows why or how, into searching for meaning.” But that search is not peaceful in the land of the differently wired; a history of shattered families (Maria with Boris and Philip, Valentin with a woman named Raya) stunts their sense of belonging and complicates their search for meaning, leading them down many alleyways that dead-end in quickly-evaporating glimpses of self-understanding. Overall, the effect of reading this novel is that of catching many people in tiny moments of rapture, none of which they can remember or reach again.

Yet people can change. Into this cast of characters creeps a certain Mr. V, a financier who, in Stambolova’s hands, seems to have just as idiosyncratic a way of living in the world as the misfits around him. My favorite scene of the novel comes when Mr. V stumbles—like so many in Stambolova’s world—into his “real” and perfect family:

Here was oblivion. Outside, the sky was dark already and time galloped on. But here—he was sitting on his behind as if it were the first time he had ever done so, he was sipping his grog, comfortable on the woolen carpet, marveling at the droplets evaporating from the tops of his shoes.

In such moments of stillness and rootedness in the daily rounds of life, Stambolova’s people find themselves. Margarita starts to play the piano again, the way she did as a child. Valentin feels that everything is in place. Their internal worlds, though never quite ordered, achieve a fleeting equilibrium.

One might be tempted to stereotype Stambolova’s proclivity for dipping into the slipstream in this way as merely a female approach to character, as opposed to the more outwardly directed one that her male compatriots have demonstrated. But I think this oversimplifies matters. I see at work instead the sensibility of the fable, which has a more long-term perspective on the workings of human life than we are used to from cinematically-influenced contemporary literature, which adheres over-zealously to the “show, don’t tell” truism. In Everything Happens, Stambolova comes out and tells us things straight up. She lets us know that Boris has always been absent from himself, that Maria has always been a cipher to her own children, that Valentin is as jealous of his sister Margarita’s freedom as he is invested in protecting it.

Such an approach to character belongs more to the “long view” tradition of fable than it does to any realist tradition (or to alternatives, such as post-modernism, that spawned themselves from realism). And Stambolova’s interest in fables makes increasing sense when one reads, in the novel’s back matter, that one of her current projects is a book about fables. This approach enables narrative economy on one hand, and a capacity for intense lyricism on the other. Stripped of the need to propel plot or explore character motivation, Stambolova’s voice—here rendered into English by Olga Nikolova, who has previously translated Pound and Eliot into Bulgarian—is set free to delve into epiphanic moments, insoluble character knots, and the beauty of human language itself.

Everything Happens allows for an abstraction that simply doesn’t show up in the “show, don’t tell” universe. Instead of revealing character through dialogue, Stambolova reveals them through the eye of her narrating persona. She writes in an erotic interlude that “Desire was now neither ‘hers’ nor ‘his’; it was simply desire.” Philosophical observation—not always linked to the lives of the characters, but free-floating within Stambolova’s third person narration—emerges as a leitmotif: “Nobody has taught us how to marvel, and that is why no one knows what marvel is.” This abstraction allows her more authority, more directness and concision, than the compunction to ceaselessly demonstrate would permit.

Like most small, non-commercial books from small countries, this book will be overlooked by most. It should not be. There is a great deal of love in it for its characters, and that affection spills off the page onto the reader. Everything Happens As It Does is the 2013 winner of the Contemporary Bulgarian Fiction Contest from Open Letter Books at the University or Rochester, a project that is supported by the Elizabeth Kostova Foundation. I hope that these entities will bring us more translations by women authors from Bulgaria, as this entry—so deliciously dumbfounding in the way it opens us up to life’s senseless beauties—leaves me eager to hear what other unique voices may be hidden out there.