Emma Straub's first novel is a paen to old Hollywood--both its heroines and its illusions. 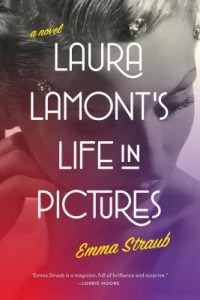 Laura Lamont’s Life in Pictures, Emma Straub’s first novel, follows a silver-screen star from her smalltime beginnings in Door County, Wisconsin, to a life of Tinsel Town triumphs and tragedies. Fans of Other People We Married, Straub’s widely acclaimed story collection, will be happy to know that with Lamont, Straub’s wry wit is again at play, but the narrative is more ambitious, spanning five decades and serving an elegant slice of Hollywood history.

The title protagonist, née Elsa Emerson, is complimented by a set of supporting characters who resemble but transcend classic casting types: Laura’s studio-head husband, her Lucille Ball-esque best friend, and her beloved familial housekeeper. In their rendering, along with a particularly poignant portrait of Laura’s son, Junior, Straub layers nuance and substance amidst the glitzy trappings of the City of Angels.

It is this particular setting and unique take on history—a behind the scenes look at the golden days of the studio soundstage—that makes this book special. Through Elsa’s eager eyes, we experience the city first as an idealization and later as a kind of character in the novel, possessing personality and complexities: “Elsa didn’t know what Hollywood looked like, or whether it was actually even a proper neighborhood, or just an idea, like heaven.”

The fictionalized studio Laura signs with—Gardner Brothers— serves as stairway to this heaven, as well as an iconic metaphor for the cinema industry:

At the entrance to the lot, girls with tap shoes clicked by on their way to convince the assembled that there were no problems left in the world that the movies couldn’t fix, as though they needed encouragement.  Gardner Brothers understood more than the other studios that glamour was the order of the day: the illusion of happiness, of opulence, of tap-dancing girls in top hats and lipstick.

The key here is the illusion of happiness. The façade, through its airbrushed beauty and manufactured allure, covers up the pockmarks of day-to-day life. If you blur the lines enough, you can no longer tell what’s beneath the glow. Straub, in her overlaying of beautiful surfaces on catastrophic events, perfectly understands the seductiveness and danger of this illusion.

As we witness Elsa evolve into Laura, the tension builds between the glamorous life of a movie actress and all that she left behind. Never does Laura question that this life, the sunny sparkle, is worth trading up for: “Her firstborn daughter was pure Los Angeles, conceived under the aegis of Hollywood’s hope and glamour, weaned on sequins and sunshine.”

Simultaneously, the reader—as well as the suppressed Elsa—is always aware of the contrast between this false, beautified reality and her previous life’s hardships. The disparity is evidenced in this description of the Academy Awards: “Next to her, everyone else in the room was held together with glitter and glue, with only Hollywood troubles, the kind that were solved by the end of the picture.”  These threads of tension—between past and present, city and country, family and career, onscreen and off—sew the fabric of  the narrative.

The novel reads like a love letter to old Hollywood. As in the stories of Other People, marriage is a central theme, and the tenor of Straub’s prose is understatedly romantic—both Laura’s relationship with her second husband and her relationship to acting—without being treacly. One of her early dates with Irving nicely captures this dual attraction: “Laura knew that from the cheap seats, the Hollywoodland sign was visible on the hills behind the dome of the Bowl, and she felt it there, flashing in the darkness like an electric eel.” The set details also reveal this love affair with being onscreen: “Now the camera’s lens hovered over her like a lover, its open, round eye coming ever closer.” Straub’s language throughout the novel is straightforward and unexpected in this way—seamless as a silk slip.

Straub’s characterization is equally refreshing: Laura never becomes the melodrama-addled leading lady cliché. Her struggles, as her successes, are her own. In her refusal to become a tragic heroine, we are reminded of genres in movies and literature, and part of the joy in both mediums is the element of surprise within a set of prescribed boundaries. The novel celebrates the readability of genre while at the same time resisting stock classification on its own terms:

Some of the sets were always up, as though the studio were going to decide on the spot what to shoot that day. A musical! A romance! A Western!  There were whole city blocks built to look like New York and anonymous small towns, picket fences and all.

Here, the sets symbolize both the pleasure found in familiar tropes as well as the unnerving lack of solidity in deceptive exteriors. Thankfully, the novel traverses this shifty world with grace and purpose. Laura Lamont’s Life in Pictures ends with applause—and is deserving of its own.