"Marburg does not glory in her characters’ flaws or paint simplistic grotesques to parade across the page for our judgment." 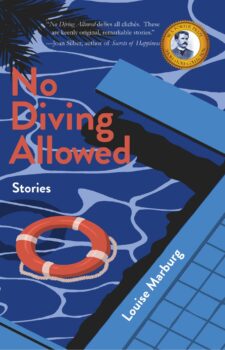 I do not like many of the characters in Louise Marburg’s new story collection, No Diving Allowed (Regal HousePublishing). This is not a criticism. Indeed, the triumph of this book is that most of the characters who anchor the fourteen devilishly compelling stories are, frankly, unlikable. They are lost, loveless, selfish, privileged, and miserable, which makes the rare moments of hope and redemption, peppered throughout the book, all the more precious and moving.

Marburg does not glory in her characters’ flaws or paint simplistic grotesques to parade across the page for our judgment. They are complex and unstable individuals, who though guarded in public, become stripped of pretense on the page. There is no expectation that we admire them, only that we see them as human as they careen towards what Marburg calls, “tragic moments of self-awareness.”

In “Wildebeest,” for example, a husband’s act of self-righteous sexual violence dooms any chance he might have had to salvage his marriage. In “Identical,” a twin tormented by and determined to kill his mentally unstable brother, discovers himself unable to live without him. In “Creamer’s House,” a lonely, recalcitrant old man, antagonizes and burgles the new neighbors, and does not know how to return the love of his own grandchildren.  Characters, like these, rendered honestly and with sympathy, have little chance of redemption, and anyway could not accept such a grace if offered.

While characters in this collection do not reappear, the stories are linked by the appearance, in each one, of a swimming pool, which serves as a motif for the unforgiving and highly controlled social milieu of the privileged middle class. One recalls John Cheever’s famous story, “The Swimmer.” In fact, when I finished reading Marburg’s collection, I had the satisfying feeling of having journeyed and briefly stopped in the backyards and lives of a whole neighborhood of people. Like Cheever, Marburg’s prose is crisp, her insights into human nature, ruthless and revealing and suited to the short story form, which, because of its length must be as suggestive as it is evocative. Consider the opening lines of “Minor Thefts”:

The swimming pool was empty because there was a crack in its side that needed to be patched, so Emma used it as a hideout when she wanted to get high. Bundled up in her purple down parka and a pair of sliver Uggs, she would squat on the cement near a moldy accumulation of damp leaves, hoping no one would see the rising smoke or smell the skunky odor of the weed. But the pool was thirty yards from her house and half hidden behind a hedge; so no one would think to look for her there—if they were looking, which they probably weren’t.

This evocative image suggests the fracture in Emma’s family, her growing loneliness and isolation, and sets a melancholic tone that is balanced masterfully in the next scene by the humorous arrival of her mom’s new boyfriend, Doctor Feinstein, the gynecologist who delivered Emma, years ago. “You were a loud one,” he says by way of introduction. It’s these kinds of absurd, but entirely reasonable turns that mark this book as a superb work of realism.

No Diving Allowed defies the literary cult of likability; it portrays people with their worries and warts, and families with all their flaws, and dares you to love them anyway. It is a brave and satisfying book, full of truth and insight.