"This, then, is what’s at the core of Lennon’s success as an author: the power of his language. "

"Lennon not only balances the mundane with the fantastic, but makes the fantastic feel mundane in the context of this world": Sung J. Woo on Robert J. Lennon's new collection, See You in Paradise.

Maybe it’s strange for a reviewer of a collection of short stories to say that he is not a fan of short story collections, but I want you to know where I’m coming from. Don’t get me wrong—I love short stories. I love their intense focus, their fleeting brevity, an entire world contained and expressed in a few thousand words. What I don’t like is reading one after another by the same author, because I get tired of hearing the same voice over and over again. Also, reading another short story after having just finished one can feel like climbing a new mountain, because I have to get acquainted with another set of characters, and the setting is different, and so is the situation, and I miss those people from before…can’t they just come back and give me a break, please?

So what is a short story writer to do to subvert this feeling of sameness? Change tenses—all verbs in the present, stat! Change points of view the way a baseball pitcher changes pitches—from the fastball of the third person to the curveball of the first and the occasional changeup of the second. Sometimes we’ll get something extra zany like a story crafted as a false document, such as a police report or a teacher’s evaluation of a problematic student. But here’s the thing: it’s a fool’s errand. Despite all the literary pyrotechnics, the short story writer can never fully escape their own style and aesthetic.

But then comes J. Robert Lennon, whose collection See You In Paradise was released by Graywolf in November, and I’m forced to retract my complaint about the short story collection as a form. Because even though See You in Paradise is a collection of a single mind, it certainly doesn’t feel like the case. In musical parlance, See You plays more like a mixed tape of a variety of musicians than the sustained work of a single singer. How Lennon is pulling this off is a mystery; as far as I know, he’s only got one brain. But perhaps to quote from his other brilliant collection, Pieces for the Left Hand (2009), which consists of 100 very short stories:

No one yet has discovered how the magician was able to make the switch, but all agree that it seems to have been some sort of trick.

I have only two regrets after having read See You in Paradise. One, it took way too long for his full-length stories to be collected. Two, I wish I could read them for the first time all over again. Actually, I take back the first one. I think one of the reasons that See You in Paradise is so good is because this is about twenty years worth of Lennon’s short fiction condensed to the fourteen best stories. So thank you, universe, for finally allowing this stupendous act of delayed gratification.

We start off with “Portal,” where a suburban family discovers they have a magical portal in their back yard. Yet rather than opt for surprise (“What is this thing and what is it doing here?!”) Lennon eschews the obvious reaction and treats that strange as if it were everyday:

…there had been nothing about it in the real estate ad. You’d think the former owners would have mentioned it. I mean, the dry rot, I understand why they left that out, but even if this portal was busted, it’s still a neat thing to have…

Likewise, when Lennon describes the portal itself, he makes it absolutely real for the reader through his precise use of concrete details:

This close, you could hear a low hum from the power the thing was giving off.

I got up nice and close to the portal, until the little hairs on my arms were standing up, and I stuck out my index finger and moved it slowly toward the shimmering air.

This is the reason a story like “Portal” work so well in this collection—Lennon not only balances the mundane with the fantastic, but makes the fantastic feel mundane in the context of this world.

After reading “Portal,” a reader unfamiliar with Lennon might assume he’s a writer who swims with some wacky fishes. But next comes “No Life,” which is about a couple trying to adopt a boy, and this piece is as straightforward and realistic a tale as can be. In the third-person, Lennon switches points of view between our protagonists, Alison and Edward, and we similarly pinball between sadness and hilarity. “No Life” may be categorized as a literary story, but it is every bit as entertaining as the speculative fiction that came before it. 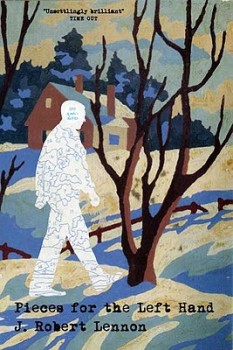 If we think of “Portal” and “No Life” as operating at opposite ends of the spectrum of realism, then what we discover throughout the rest of the collection are stories that fall somewhere in the middle. Or, which borrow from either end of the spectrum. For if there can a unifying thread in Lennon’s stories, perhaps it is that weird stuff happens to everyday people—and the weird is, ultimately, everyday.

“Hibachi,” for example, feels like something that Haruki Murakami might write—a mixture of the funny, the strange, and the obsessed. It’s about an accountant who gets hit by a car and loses his ability to walk. On his wedding anniversary, he takes his wife to a Japanese hibachi restaurant, where he notices how she was “concentrating with all her might, her lower lip gently held captive between her teeth,” as she watched the goofy actions of the chef. With her birthday coming up, the husband has an idea: he’ll buy her a professional hibachi set. While the premise and most of the action of the story are fairly realistic, albeit a bit odd, “Hibachi” transcends the quotidian when the wife invites some acquaintances to her performance/dinner. Let’s just say she puts on a show that surprises everyone, including this reader.

Even high-concept stories like “Zombie Dan,” in which the narrator is forced to spend time with a childhood friend who has come back from the dead, traffic mostly in the mundane. For despite the outlandish situation, the story is more funny than grim, and undercutting the silliness is a stealth examination of class.

Perhaps the weirdest of all, and yet still firmly placed within an utterly domestic setting, is my favorite of the bunch, “A Stormy Evening at the Buck Snort Restaurant.” Written with heavy authorial omniscience, it features a deceptively simple plot. A brother and a sister are in their restaurant, the Buck Snort. Outside, there’s a strong storm brewing. And a couple, looking for shelter from the onslaught, enter. They order tea. And then they leave.

Not much of a narrative, but how closely Lennon observes these people, and how controlled he is in his telling, elevates this story to masterpiece status. Here’s a snippet:

Bruce is sanding the seams and corners of his model car with one-thousand-grit wet/dry sandpaper. The comforting sound of sanding is too quiet to hear over the roar of the wind and rain, but he can feel it through the plastic model: it is the feeling of everything is going to be all right. His memories of their parents have become confused, but he is certain, absolutely certain, that their father used to sand their mother every evening before they went to bed.

It’s that twist at the end—strangeness presented as normalcy—that makes Lennon’s work so evocative. The writer and scholar John Gardner often wrote about fiction as a dream, where the job of the writer is to have the reader fall into a trance of the created world. “A Stormy Evening” is a beautiful rendition of this concept, where Lennon utilizes extremely close psychic distance and precise language to give life and extension to his very unusual people.

This, then, is what’s at the core of Lennon’s success as an author: the power of his language. Despite how surreal or strange or fantastic the set-up, his prose is so compelling that you can’t help but suspend your disbelief as a reader. Here’s a sentence from “The Wraith,” a story that manages to combine love, politics, and the supernatural, that is a perfect example of Lennon’s sheer writing power:

He gazed at his newspaper where it lay, the plate of cantaloupe humped below it, and at the dark gray stain limned by its wetness.

Notice the strength and specificity of his verbs. There’s nothing strange about what’s happening here—in many ways, it’s a completely ordinary description. Yet the way in which Lennon directs the reader’s gaze, the ordinary is transformed into the hyper-real. And with that shift a strange, unidentifiable energy ripples below the surface of the sentence, just like that plate of fruit below the newspaper. It’s haunting in its simplicity and its precision, as are so many of these stories in See You in Paradise.