In her first novel, Swamplandia! (Knopf, 2011), acclaimed short story writer Karen Russell (St. Lucy's Home for Girls Raised by Wolves) renders a highly specific shoebox-world of wonder and mystery. Set in the Florida swamps, largely within a fictional alligator theme park, the sun rises and sets with her lush yet economical descriptions and poignant characterizations of the 14-year-old protagonist, Ava, and her rapidly dissolving family. 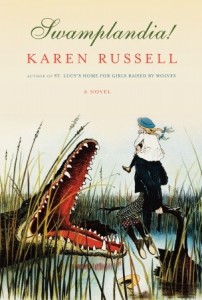 Ann Patchett once said, “If I weren’t a novelist, the thing I would most like to do is build dioramas. I was one of those kids who built little worlds in shoeboxes. That’s basically what novel writing is. You get to build every tree, every person, put them all in place, and decide when the sun comes up and goes down.”

In her first novel, Swamplandia! (Knopf, 2011), acclaimed twenty-nine year old short story writer Karen Russell (Featured 20 under 40 and Five Under 35, author of the collection St. Lucy’s Home for Girls Raised by Wolves) has created a highly specific shoebox world of wonder and mystery. Set in the Florida swamps, largely within a fictional alligator theme park called Swamplandia! the sun rises and sets with her lush yet economical descriptions and poignant characterizations of the 14-year old protagonist, Ava, and her rapidly dissolving family.

When Ava’s mother, the park’s glamorous main attraction, dies of cancer, the family is thrown into financial hot waters. Ava’s quest, then, is to save her park, and, by extension, her family:

The Beginning of the End can feel a lot like the middle when you are living in it. When I was a kid I couldn’t see any of these ridges. It was only after Swamplandia!’s fall that time folded into a story with a beginning, middle, and an ending. If you’re short on time, that would be the two-word version of our story: we fell.

Russell slowly acclimates the reader to the layout of the land: the park’s Café where the family takes their meals, a museum with personal artifacts and relics, the Gator Pit for wrestling and swimming with alligators (gators idiosyncratically called “Seths” throughout), a ferry to deposit and retrieve the tourists, an abandoned library boat where they borrow books, a lurking underworld, and far away from everything, the mainland with its threat of eternal boringness and evil rival theme park, ready to overtake it all. 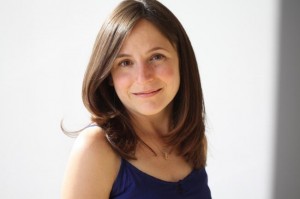 The Bigtree family is an eccentric bunch: Ava’s father is called The Chief even though he has no Native American lineage, and he refers to his family as a tribe. Their names, Hilola, Ossie, Kiwi, reflect their insulated grandeur—the mainland thinks they’re freaks, the kids don’t go to school, but, growing up onstage, they understand the glory of the limelight and the specialness of public adulation.

As a result, each tries unsuccessfully to restore the park’s former eminence. Kiwi defects to the rival park, cleverly named The World of Darkness (their customers referred to as Lost Souls), and Osceola succumbs with more and more frequency to séances with ghosts summoned through a book of spells called The Spiritualist’s Telegraph. The Chief takes off on a business trip for the majority of the novel, and his absence, quick on the heels of his wife’s death, is strongly felt.

The book owes tremendous debt to George Saunders, who is thanked in the acknowledgements, and it shares the Saunders-esque trademarks of theme-park particularity, absurdist-tragic events, a touch of the supernatural, and razor-sharp, satirical wit.

The novel succeeds as a highly executed piece of craftwork—scenes and flashbacks perfectly structured and woven into the present action, chapters that alternate point of view with Ava’s brother Kiwi, on-pitch dialogue, and fresh, creative language; a web of metaphors spun with a spider’s silky touch:

I could taste the old Bigtree victory. Suddenly I remembered: I am an alligator wrestler. This Bird Man’s eyes were like new lamps for an old performance. He kept smiling and smiling at me, and when his gaze rolled over my skinny legs, the pins of my knees became twin suns. The chapters build and peak with the narrative arc we all model in Intro classes. Ample descriptions of local fauna, geographical history, folk-lore and alligator minutiae are all convincingly researched and rendered. Indeed, the world depicted in the wilds of the swamp, its lures and traps, the swampy thickness of its pervasive reach, is spell-binding:

Like black silk, the water bunched and wrinkled. Her arms rowed hard; you could hear her breaststrokes ripping at the water, her gasps for air. Now and then a pair of coal-red eyes snagged at the white net of spotlight as the Chief rolled it over the Pit. Three long minutes passed, then four, and at last she gasped mightily and grasped the ladder rails on the eastern side of the stage.

Still, there’s something missing. The book reads a bit slow in the beginning, the narrative ripe with tension but not necessarily suspense or urgency. The pacing at points seems to lag, the beginning too much like the middle. The supporting characters are fully developed and nicely flawed but not exactly irresistible. Kiwi’s chapters lack the shimmering sadness, the romantic decline of the park and the dangerous allure of the underworld. As a result of being off the island, they feel somewhat lackluster.

It wasn’t until the final third of the novel, when things really begin to unravel (and unravel they do) that I formed a real emotional attachment to what was happening in the story. I think this is the downfall of otherwise flawless technique, a book conceived and executed so correctly that any workshop could find no fault with it—it can sometimes edit out that ineffable quality that stirs deeper passions in the reader.

The final third, however, explodes with heartbreak. Ava’s story takes a devastating turn, and in a particularly affecting series of passages, we see her decline expressed through the lens of a wildlife gone mad, an underworld of foliage once homey, now haunted:

Now I didn’t always recognize the cries of animals; whatever adhesion in my brain connected sounds and light to the names of species was breaking down. The leaves that I had easily identified as bay or gumbo-limbo or pop ash gave way to a muted palette of foliage, a glowing russet of gray, most of it alien to me. Fewer and fewer of the plants that I tripped over or pushed through in curling curtains of vines uprooted a name in my mind. I was seeing new geometries of petals and trees, white saplings that pushed through the peat like fantailing spires of coral, big oaky trunks that went wide-arming into the woods (no melaleucas anywhere). A large egretlike bird with true fuchsia eyes and citrusy plumage went screeching through the canopy. For some reason all the life gurgling in the anonymous hammock made me want to cry. Some underworld this turned out to be, Ossie.

The conclusion does not wrap everything up to full satisfaction, perhaps suggesting that some resolutions are not as easily packaged as we’d like. It leaves us with just enough of what we need to take away, albeit less than we want.

As a whole, Swamplandia! offers many pleasures, and there’s much to admire about this indisputably talented writer whose career is just taking off. We’ll look forward to the many future dioramas she has in store, awaiting construction.