The Good Thief, by Hannah Tinti

In this masterful debut novel, Hannah Tinti beguiles without the slightest trace of the maudlin. Readers will fall in love with Ren, a one-handed orphan boy who works for grave-robbers and longs for a family, and with North Umbrage--a 19th-century New England town where widows press their ears to the earth to listen for their husbands, trapped long ago in a mine collapse.

Fifty pages into Hannah Tinti’s masterful debut novel The Good Thief, Benjamin, a con man, has talked the stern priests at a New England orphanage into giving him Ren, a twelve-year-old orphan with a missing left hand. He tells the priests that he is Ren’s brother, which everyone knows is a lie, but Benjamin is a consummate liar—the kind of charming, seductive man whose yarns you ache to believe even as you know he’s telling them only for his own benefit. Attempting to win Ren over once his first set of lies are revealed, Benjamin asks:

“What’s the thing you want most in the world?”

“Don’t be simpleminded,” said Benjamin. “I mean anything. Anything in the world.”

The boy tried to think of something else, something beyond the limits.

“I can get you that.” Benjamin held out his hand. “What do you say, little man?”

This is the kind of power Hannah Tinti has, to beguile without the slightest trace of the maudlin–to write a story not just about an orphan, not just about an orphan missing a hand, but about a damaged boy who cannot picture anything so wonderful as an orange, and to make us believe in him. As events spiral out of even the wily Benjamin’s control, we ache for Ren, but we can’t stop reading even long enough to wonder if characters or places are “real,” or situations plausible. The novel’s enthralling authority gives us no choice but to believe in Tinti’s creations.

These creations include North Umbrage, the New England town where women press their ears to the earth, trying to hear their husbands who were buried in a mine collapse. There is the dwarf who creeps down the chimney each night like a creepy, greedy Santa Claus. And there is the giant, Dolly, who, while loyal to Ren, is an exhausted, none-too-bright killer in a crude monk’s habit. Grave robbing, a mousetrap factory: the touch of magical realism is light because it’s so tied to actual events. Mines did, and do, collapse and bury men. There were and are cruel factories. The reason people believe Benjamin’s lies is that they see some remnant of truth in them, and there is truth in each of Tinti’s inventions. It’s a situational truth that reveals as much about the power of connection as it does about violence: the wilder things get, the more Ren is able to imagine a life that holds wonders even beyond oranges.

When Ren leaves the orphanage with Benjamin, he is already a liar and a thief. To survive in the cruel world of boys where he is periodically passed over for adoption due to his missing hand, Ren steals little tokens he can easily hide, “…socks and shoelaces, combs and prayer cards, buttons, keys, and crucifixes.” Then, he deceitfully prays with the other boys at the statue of Saint Anthony, patron saint of the orphanage, and the saint of lost things. He throws a wishing stone down a well so that no one else can wish on it; he fights ferociously with Ichy and Brom, the unlucky twins who are his only friends.

After Ren enters the real world, however, The Good Thief depends on his compassion, and on his smarts. Benjamin instructs Ren: “You can’t just go around taking care of people. They’ll grow to depend on you, and then you won’t be able to leave them when you need to.” This is, of course, true, but what Ren must figure out for himself is how it feels to stay, and, in another act of invention, to create relationships based not on the exchange of coin for jewelry stolen from the dead, but in gestures that need no recompense but may receive it all the same. 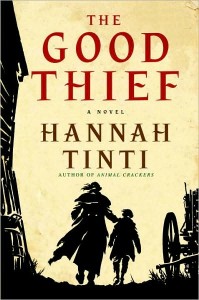 Even as Tinti’s details and characters make the novel completely her own, the author also retells a classic story, that of the resourceful orphan boy; I marvel at how effortlessly, even in that somewhat glutted field, she carries it off. Reviews have compared Tinti to J.K. Rowling, and perhaps in terms of sales this is a good thing for any author, but this is not Rowling (who I also love)—Tinti’s writing is both more emotionally complex and scarier. Unlike the characters in Harry Potter books, the friends and possible authority figures who surround Ren are deeply troubled, unreliable, and needy. They are, in other words, real people. And although saints can raise boys from the dead, Ren always has the stump of his hand to remind him that violence is present.

Tinti doesn’t shy away from the consequences of bodily harm. In this sense she is less like Rowling (most of whose characters can magically heal) than like Dickens, whom other reviewers have also mentioned. The names in The Good Thief are wonderfully Dickensian—and Ren is reminiscent of Pip, Benjamin of Magwitch—but where Pip spends his time mooning after Estrella and dreaming of a better life for himself, Ren can’t quite allow himself the luxury. Each time he discovers a mother figure, his expectations are turned upside down. It is only through the redefining of family, the power of invention—”to build a better mousetrap,” as the epigraph notes—that Ren’s imagination finds purchase in reality.

The perfect end of the novel, the final words of which continue to ring in my head at the oddest moments, leaves the characters in a scene simultaneously uplifting and heartbreaking. The word hope has been tossed around so much this year that it’s Tinti’s great and almost painful gift to reminded us here that, in its purest form, it is imagination: a kind of longing so intense that it can sustain us in the face of enormous loss.