"Beautifully written, stacked to the rafters with wit and warmth and real resonance..."

The Great Concert of the Night, by Jonathan Buckley

"If memory is a museum to which we all repeatedly return, then perhaps David’s anguish is the price of admission he must pay to keep Imogen alive in the only way the dead can be kept alive." Travis Holland reviews Jonathan Buckley's novel The Great Concert of the Night.

Entering the museum, we are met by silence. It could be a gray morning in April, or the middle of the afternoon in summer, a Saturday—it makes no difference. A check of the visitors’ book tells us what we already know: no one comes here anymore, no one but us. A whiff of floor wax, or is that a candle burning somewhere nearby? The light could be better, but then that’s often the case with dying museums, as it is with memory. The light’s never as good as we would wish, and even when it is, nothing is quite where it should be, or at least where it was when we last visited, whenever that was. Still, we keep coming back. “Museums are places of contemplation,” writes Jonathan Buckley in his marvelous new novel, The Great Concert of the Night (New York Review of Books), “they are places of poetry; they create constellations of images in the mind.” They can also be simultaneously chaotic and sublime, and for the lonely, both a salve for the soul and a torment.

“A bit of a mess—but a nice mess,” as one visitor aptly describes the Sanderson-Perceval Museum in Buckley’s novel. David, the aging curator at this quirky, ailing museum in southern England, is our guide. The novel opens just past midnight on New Year’s Eve, with David watching Le Grand Concert de la Nuit, a film in which a deceased lover of his, Imogen, appears. Entranced by Imogen’s luminous performance, and moved by memories which will not let him go, David is compelled to write an account of his time with her, an account he will carry on all through the coming months. Those memories, much like the objects collected in the museum, have no real order to them, at least none except the organizing principle of longing and past love; like the antique musical instruments and gleaming glass jellyfish and medical grotesqueries acquired by the museums’ founder, the late Dr. Charles Percival, they seem to have been carefully set down in their display cases by a tornado. 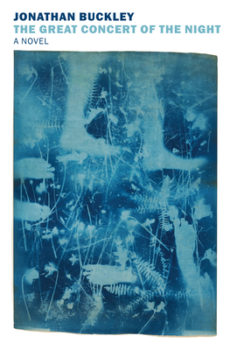 Enlightenment in a place like the Sanderson-Perceval Museum, if there is any, proceeds from “pleasure and confusion,” says David, who will spend much of this troubled year meticulously examining his time with Imogen. His provincial museum is slowly dying the death of a thousand cuts. The attendance numbers are a daily humiliation, operating revenues are in the red, and the roof badly needs fixing. David himself is in not much better shape, we discover. His is the particular loneliness of an inquisitive mind perpetually turned inward, a mind in many ways like a museum, stuffed to the brim as it is with intellectual marvels, along with the occasional bric-a-brac. An ex-wife, Samantha, encourages him to get out more, while another friend, the hapless, occasionally-homeless William, talks David’s ear off, spinning out his various half-baked metaphysical theories. A brief, gorgeously described trip to Rome offers a small respite, but mostly William’s eye is cast backwards onto Imogen. He remembers their first meeting at the Sanderson-Perceval Museum, and the film she later shot there, Devotion. He recounts their separation, and the long, humbling arc of her illness and eventual death, which reunites them once again. Watching her movies now, David is both beguiled and tormented. Scenes of graphic lovemaking—not all of them simulated, we discover—press painfully on old wounds. Antoine Vermeiren, the director of a number of these films and a quote-spouting magnet for controversy, is now accused by some of his former actors of sexual exploitation, and while the novel offers a somewhat perfunctory nod in this direction, it seems more interested in an indirect reckoning with Vermeiren. “I can watch this scene now,” David says of one of Vermeiren’s films, the scandalous Chambre 32, “but it is distressing, even if the anguish is less than I felt when the film was new. It has been occluded by a greater anguish. But when I watch Chambre 32 the lesser pain is reawakened; again our relationship fails.”

The roots of this failure may have something to do with a memory David repeatedly returns to throughout the novel: a night when Imogen invited him to an orgy at a mansion known as the maison de maitre, the master’s house. True to form, David restricts himself to the role of observer, but even seeing has its costs, and what David sees at the maison de maitre cuts deep. I’ll admit: at times I felt the novel straining a little in these repeated returns to this night. It’s a performance on Imogen’s part, yes, and more to the point, an observed performance, and thus on some level an act of courage, we’re told. But there’s also a whiff of Vermeiren here—not his sexual lechery and studied self-importance, I don’t mean that at all, but his “obligation to shock,” as Imogen’s mother deftly describes the director at one point in the novel. Compared to quieter scenes—I’m thinking of a final, simple goodbye between the dying Imogen and a former fellow actor named Amy—this night at the master’s house feels a little top-heavy.

If memory is a museum to which we all repeatedly return, then perhaps David’s anguish is the price of admission he must pay to keep Imogen alive in the only way the dead can be kept alive. Which is to say, to remember is to feel, and better to feel than forget. Beautifully written, stacked to the rafters with wit and warmth and real resonance, and yes, with its fair share of intellectual curiosities, The Great Concert of the Night is, like the Sanderson-Perceval Museum, a novel well worth visiting.