"This willingness to myth-bust is critical to the continuing maturation of books set in the American West," writes contributor Laura Pritchett in her review of The Home Place. "La Seur is elegant and graceful and quiet in her approach, but she succeeds."

The most immediate beauty of Carrie La Seur’s debut novel, The Home Place (William Morrow – HarperCollins), is that it proves itself to be a myth-buster in both storyline and in theme from the opening paragraph:

The cold on a January night in Billings, Montana, is personal and spiritual. It knows your weaknesses. It communicates with your fears. In this cold, you understand at last that you are not brave at all.

Not brave at all? Communication? These words signal a book that’s willing to tackle the mythos of the American West. The rest does not disappoint: Alma, a lawyer from the Pacific Northwest, is a successful strong woman who is pulled back to rural Montana in the wake of her sister’s death. She’s not about to fall prey to the stereotypes of the West that have broken her family, nor is La Seur going to fall prey to the inclination to mythologize the West further.

Besides strong, articulate, city-dwelling Alma, we enter a world in which difficult subjects (rape, incest, drug abuse, land use, mining) are discussed, where the strong stoic patterns of the West are taken to task.

Lest readers think this was accomplished long ago, I would suggest that plenty of contemporary novels still operate under the old patterns, constricted still by cultural mores, paradigms, and trends in publishing and readership, and the very idea of what a “book set in the West” should look like. Our literary maturation is a transition still very much in progress, which is why it’s a delight to see new authors writing new literary novels, published by major houses, telling more sophisticated and nuanced and complete stories of our contemporary West. After all, a good book’s job is to expose real lives, the blood and heart inside us all. And the West is a complicated place.

In much of our past literary history, the West has been portrayed one way: men were the focus; they were quiet and stoic; they had a bunch of broken dreams. There was an absence of minorities or women, except to use them as characters who reflected something about the man. 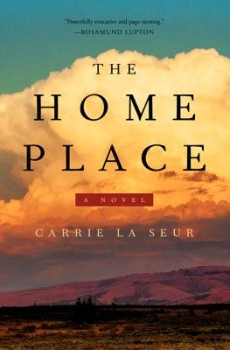 There are times, though, when we’ve just backed ourselves up into another corral, so to speak. Are all our characters to be ranching, fishing, camping, kayaking, outdoorsy, tough strong folks in rural areas?  And are we all—the tough folks who hunt, camp, ride horses, and fish—to relish it, as well? And to do so with either cowboy boots or Tevas on our feet? We may not be Old West, but now we’re often corralled into being New West–either hippie environmentalists or wolf killing ranchers (or some similar equivalent). What about all the possibility of space in between? Because, frankly, there is so much space between, and we are all such complicated beautiful beasts.

This book, in its characterization and in its story, elbows many of those boundaries aside. There is a love story with an old boyfriend/cowboy named Chance, for instance, but said cowboy has an electrical engineering degree and is self-aware enough to admit to her, “I was too weak a man to do what it took.”

In speaking both of her love for him and seemingly of the maturation of the West itself, Alma’s clear-eyed response is this:

Alma wonders if love doesn’t die of time and distance, of little daily slights and brutalities. .  . What existed between them is preserved under glass. It would have to breathe and live again, here and now, between their adult selves, for her to know if it was ever real.

The adult self of the American West is itself being asked to live and breathe again.

To that end, La Seur doesn’t romanticize the landscape, either, which is a particular challenge for us writers of the West. It’s a tightrope walk: how to give tribute to space and place without rolling into nostalgia or sentimental grandiosity? After all, it is the air and space and mountains and ranches in the West that make this place interesting and we are influenced by space, terrain, weather, and nature. The trick is to render landscape without falling into tropes. To find the unique details that reveal complicated inner workings of humans and the larger workings of the planet. La Seur does not disappoint. The cold, she writes, “sounds like wolves and reverberates like drums in all the hollow places where you wonder who you are and what you would do in extremis.”

This willingness to myth-bust is critical to the continuing maturation of books set in the American West, and if there’s one quality to look for first in a book, this might be it. How has the author moved forward or changed the cultural story? How does this book tell a unique and complex story of our unique and complex lives here?

La Seur is elegant and graceful and quiet in her approach, but she succeeds.

This matters. Books have a lot of power, after all. They show us how to live, or how we could live. They make us less lonely, they connect us, and they illustrate ways of being human. In a certain odd way, art is what makes us more real.

Our literary canon in the West will continue to expand, will continue to become more complete and varied. And this helps us mature as people, too. After all, books can influence our self-identity, and our identity gets captured as characters in books, and back and forth it goes like some frenzied feeding machine. Co-creation, I call it. Writers write about real people—we get our inspiration from somewhere, after all. Meanwhile, and in contradiction to that, we writers also single out interesting characters in order to write singularly interesting stories—and then real people, who read these books, are often inspired to live up to these unique characters we’ve just invented. In other words, we co-create each other, which means we writers need to get it right.

The Home Place does. Near the end of the book, Alma dries her tears and looks steadily ahead. “The future seems suddenly like the open plains: empty, dark as a stage that lies waiting for the opening curtain, replete with possibility.”