"Each of Bhuvaneswar’s characters are writing their own stories, making space for themselves in their respective worlds."

For the last few weeks, I have been living in the world of White Dancing Elephants (Dzanc Books). The seventeen stories in Chaya Bhuvaneswar’s debut collection, which was recently named as a finalist for the 2019 PEN/Bingham award, ricochet across oceans and continents and historical eras. These stories take place in modern-day Cambridge, in Imperial Portugal, in 1981 Queens. The characters that populate these stories have little in common. In fact, it is a feat of intellectual gymnastics to even imagine them in the same room.

And yet, there is a centrifugal narrative force that pulls these seventeen seemingly disparate worlds together. Bhuvaneswar’s characters—even the most “minor” among them—share insuppressible desire and agency, electric and life-affirming in its unpredictability. These are embodied characters who want. These are characters who act with a sort of daring that questions and challenges their deeply mortal bodies and their troubled circumstances. Embodied defiance—sometimes quiet, sometimes dramatic, but never abstracted—is the lifeblood of this collection.

With his insatiable desire for salt, the narrator of “Jagatishwaran” is one of the most physically embodied of the collection, keenly aware and constantly in hungry search of sights and smells.

A pink carnation has budded, tender, in the box of green placed outside the front door. I crush a few petals underneath my tongue, wondering why they are not sweet, sucking them in like candy…

Due to a past mental health breakdown, unemployed Jagatishwaran is constantly derided by his father and dismissed by his sister, who lives in the US and visits the family in each summer. And yet, he carves out for himself a secret existence filled with art, reading, companionship, and sensory pleasure. Jagatishwaran, whose name translates to “lord of worlds,” finds a community in which he can exist as himself—even as he grapples with his family’s perception of him as an invalid, and the bittersweet emotional reality of being the sibling left behind to comfort his aging parents when the American visitors have gone.

In “Orange Popsicles,” we see another character making sense of what she has endured and resolutely taking ownership of her own story. Jayanti survives a violent sexual assault as a college student. The assault is described in painful, visceral detail—the group of attackers breaks one of Jayanti’s arms—and the reader wonders how Jayanti, a pensive aspiring artist, can ever fully recover. And she doesn’t recover. The assault isn’t magically erased. The Jayanti we encounter years later is still afraid and forever changed. But she is also fully in possession of her memories and of herself as an artist, able to imagine the ways in which her trauma and lived experiences might deepen her art. Her focus on the work is stronger than ever, even as she battles her fears. The story ends with Jayanti, alone in her apartment, working resolutely through the night on a set of etchings she began before she was assaulted. Her etchings contain “everything [she] had paid so much to know about…Jayanti believed that whatever she created would endure.”

In a story about a very different kind of artist, we meet Mikki, the main character in “Chronicle of a Marriage, Foretold.” Secure and isolated at an artist’s retreat, Mikki creates an art installation and finds herself drawn into it by a fictional love interest, “an invisible, impossibly generous, unfailingly exciting lover.” But as Mikki, who is in a struggling marriage, continues to embellish and refine the miniature house she is building, to further articulate her fantasy, the unseen man begins to take on a life of his own. He addresses her directly, revealing a comically boisterous identity: “Even in what he was shouting, he kept misspelling her name.” The story takes on a metafictional quality as the two engage in a tug-of-war for narrative control, and Mikki loses herself in the art installation. Mikki creates, in her art, the kind of absorbing relationship she feels that she needs to experience—and then she allows herself to succumb to this artmaking in a physical way, “with the right Harry…holding her there with his whole body, which feels heavy and immovable, as if it had been carefully glued into place.”

Jagatishwaran, Jayanti, and Mikki seek to redefine their lives through art. But some of Bhuvaneswar’s characters want simply to exist more fully in their bodies, to take full possession of the sensory pleasures the body continues to offer, even in illness. In “Newberry,” Vinita’s mother is blind, but her sense of touch remains. She asks her daughter to paint her nails for her: “I can’t see the color,” she says, “but I can feel where they’re painted.” Vinita’s mother still savors these small sensory triumphs, “lace, the touch of lace, like bursts of berries on her tongue, like sunlight still generous on her face and hands, this her mother said she still enjoyed.” This is a character who wants, simply, to be, and in Bhuvaneswar’s telling, this desire takes on tender deliberateness, an active seeking of sensory joy.

Vinita’s mother in Newberry isn’t the only character to stake claim to the page with a quiet, insistent desire. In “The Goddess of Beauty Goes Bowling,” a father can barely suppress the resentment and envy he feels toward his disabled twelve-year-old daughter, Shree, who has, in his mind, monopolized his wife’s time and forced the reconfiguring of his family. Though she isn’t the central character of the story, Shree makes space for herself on the page. Ignored and neglected, Shree is different from Vinita’s mother in “Newberry” in that she cannot ask her father directly for what she so desperately wants. Even as her father disparages her and dismisses her as dull or uncomprehending, she shows astute intellectual and emotional agency, finding a way to physically give voice to her yearning each night.

Praying was the way Shree could talk as loudly as she liked, for as long as she wanted, without ever having to ask for permission…There she was at twelve, able to tell the story of Narasimha—half man, half lion, the form of Vishnu that had come down to earth to protect a faith boy from his father’s threats and curses…[she said] Let Dad not yell and scream, yell and scream. Let Dad love me. Please let him, let him. [Emphasis my own.]

In these shouted prayers, Shree reveals that her understanding of her family and her place in it is quite lucid—and, like all of Bhuvaneswar’s characters—she takes action and asks for what she wants.

In a wonderful interview with David Naimon on the Between the Covers podcast earlier this year, Bhuvaneswar discusses what interests her as a writer. “The main obstacle I find myself concerned with,” she says, “are obstacles to self-knowledge.” This revelation underscores the magic of Bhuvaneswar’s characterization in this collection. Her characterizations begin with a quiet exploration of the body, then bloom outward to ascertain situation in time, place, status, and era. The characters in White Dancing Elephants are all doing this probing, actively seeking self-knowledge, seeking ways of existing in the world as wholly and physically themselves.

In the stories that bookend the collection—the title story, “Dancing White Elephants,” and “Adristakama”—Bhuvaneswar explores a different kind of agency: an insistent yearning to revise and rewrite. In “Dancing White Elephants,” a woman imagines the life of the son she has miscarried. In “Adrisktakama,” a woman rewrites the moment in which she rejected the love of her life, who had traveled to India in an attempt to convince her not to marry someone else.

The speculative elements of these two stories evoke a dreamlike state. The narrator in “Dancing White Elephants” takes a somnambulant walk around London in the rain as she imagines the full, thriving life of the son she has lost. The story is written in second person; it is a love letter, a fierce effort to hold space for a son, even if that space must be an elsewhere, a fictive forest filled with white dancing elephants. “In the forest,” the narrator says to her son, “no one can stop us from dreaming.”

If the narrator of “Dancing White Elephants” rewrites the future, the narrator of “Adrisktakama” rewrites the past. The narrator imagines the physically exhausting travel legs of her ex-girlfriend Lauren’s journey to find her in India. But on the receiving end, in Agra station, she replaces her younger self with her current self, a person who has enough self-knowledge to understand the decisive importance of the moment. A person who knows herself well enough to choose love.

Each of Bhuvaneswar’s characters are writing their own stories, making space for themselves in their respective worlds. As a reader, it is tremendously satisfying to witness this agency, this insistent claiming of one’s own body and circumstances—particularly in the collection’s kaleidoscopic range of characters, settings, and time periods. In fact, in “Adrisktakama,” lovesick Lauren encounters a statue of Garuda, “the bird that one of the gods uses to fly across oceans, across worlds.” What if a short story collection could do just that? 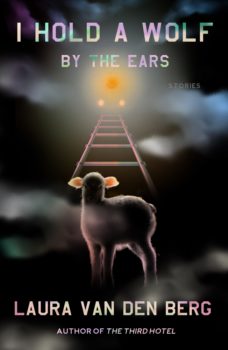 You Can Break Time: An Interview with Laura van den Berg