It’s a sunny Sunday morning when we wake and ready ourselves to depart Chicago. Gazing out the the window of our room on the 23rd floor of the Hilton, I can see a host of over-sized snow sculptures across the street in Grant Park—enormous frogs kissing, a six-foot tall hamburger, a gigantic head of Einstein, and an anatomically correct heart the size of a Volkswagen that is now broken in pieces, presumably after a bad Valentine’s Day last night. Beyond the park, stretching toward the horizon line, Lake Michigan is the color of blued, tin siding. It might be sunny, but you can tell from the flat color of the water that spring is still more than a month away.

When we come downstairs and the elevator doors open, I feel like Cinderella after the ball—all evidence of what took place here has disappeared. Other than a few lone flyers from a press scattered on the edge of a planter, there is little indication that for the past four days this hotel has hosted hundreds of authors, publishers, writing students, editors, and fellow lovers of the written word at the 2009 AWP Writers Conference. Gone are the crowds clogging the lobby. Gone are the people sitting on the carpeted steps of the grand stairways that lead up to the gilt ballrooms. Gone are the participants peering down from the balconies above. In fact, there were times during the conference when I walked through this area and felt as if the building had literally been taken over by writers—like students occupying buildings during the 60s. But now the few souls who remain are waving goodbyes or pulling on heavy winter coats as they drag their suitcases toward the revolving front door.

As after any conference, you leave with a bit of sadness, a bit of relief, and a bit of a hangover. Me, I’m also leaving with about three dollars in my pocket, due in no small part to those fifteen-dollar martinis at the Hilton Bar. But I’m happy to do so in exchange for having gotten to spend the last few evenings with my old Interlochen and Madison and Sewanee buddies. To say nothing of the opportunity to connect with—and, in some cases, to meet for the first time—several of our Fiction Writers Review contributors. Big love to everyone who helped us work the table and spread the word about our project during the conference, especially Lee who was there with me from dawn until dusk. (Not that one could have guessed the time of day in the windowless bunker of the Exhibition Hall, a place where even cell phone signals couldn’t reach.) 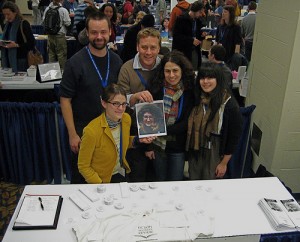 It was especially great to meet some of our readers. Thanks to all of you for your kind words and support, both in terms of the goal of this project and its design (the latter of which we owe to the extraordinary talent and generosity of our site designer and fellow fiction writer, Marissa Perry). Thanks, too, for passing us on to your friends and students, and for considering sending us your work in the future. We’re grateful and it means a lot.

Also thanks in advance to those individuals and publications that have shown such enthusiasm about Fiction Writers Review these last few days. We’re looking forward to collaborating and exchanging ideas in the future. And finally, big thanks to Anne Stameshkin, our founding editor, for her vision: to provide a forum for the work and ideas of emerging writers. The pneumonia may have stopped her from being at AWP in person, but she was with us in spirit.