Bizarro Fiction: literature of the weird 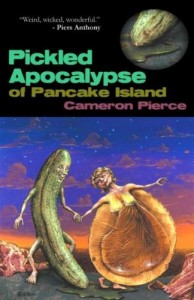 AWP provided a perfect opportunity to discover what has captured the imaginations of fellow writers with vastly different viewpoints. One such writer is Eric Hendrixson, who introduced me to Bizarro fiction. As Hendrixson described his novel, Bucket of Face, I realized I’d been completely unaware of this genre that Horror World calls “the literary equivalent of a David Lynch or a Tim Burton film.” Hendrixson kindly offered to answer some of my novice questions.

Bizarro is literature of the weird. This isn’t the same thing as experimental fiction, which is weird in its structure and sometimes unreadable. In Bizarro, it’s the characters, plot, setting, or premise that is weird. Bizarro is linked to absurdism and surrealism, but being fun to read is more important than any particular theory or philosophy.

Carlton Mellick III called it the literary equivalent of the cult section of the video store. I think that’s a great analogy because it defines the genre in terms of the reader. You go to that section of the store because you specifically want a strange story. Like in the cult section, there are some books that are like Troma movies, some like David Lynch movies, some like monster movies, and some like grindhouse or exploitation cinema.

The people writing and publishing what is now called Bizarro fiction go back a little over ten years, but there is a thread of weirdness that goes back to the beginning of storytelling.

The genre—at least the term—is a fairly new one. What did you read growing up that informed your affinity for the Bizzaro aesthetic?

I was born overseas, so I didn’t watch much television. I listened to a lot of Grimm’s fairy tales on the record player and memorized a lot of nursery rhymes. When I was old enough to read, there was A. A. Milne, Roald Dahl, Lewis Carroll, and a lot of nonsense verse. I’ve always been a fan of light verse. In high school, I read a lot of mythology and some William S. Burroughs. In college, I became very interested in Franz Kafka, Albert Camus, Italo Calvino, Hunter S. Thompson, and Chuck Palahniuk. However, I still had a very classical mindset.

I think the turning point was when I took a class on Nikolai Gogol by Vassily Aksyonov at George Mason University. As Nabokov wrote, Gogol does something to you, and reading him, especially as taught by Aksyonov, completely changed my writing style.

Who are some of the writers working in the genre that you most admire? 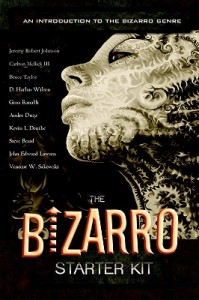 The first Eraserhead book I bought was the Bizarro Starter Kit Orange. There are three Starter Kits: Orange, Blue, and Purple. Orange was the first one, and first novella in the anthology that I read was “The Greatest Fucking Moment in Sports” by Kevin Donihe. He’s still one of my favorite Bizarros. He has a new book out called Night of the Assholes, which is an interesting take on Night of the Living Dead. Instead of an outbreak of brain-eating zombies, there’s an outbreak of rude people. At first, it doesn’t sound like a very scary story, but these guys are very rude.

I like Jordan Krall‘s work. He works in a Bizarro Noir style that is similar to what I do. Mykel Hansen is very good, especially in The Cannibal’s Guide to Ethical Living. Carlton Mellick III is one of the originals; just about anyone who reads Bizarro at all has to read him.

What are some presses dedicated to authors working in the Bizzaro mode?

The largest one is Eraserhead Press, which has published over 100 books. Eraserhead has a few imprints under it. Raw Dog Screaming Press and Afterbirth Books are the two other original Bizarro publishers. However, Bizarro attracts a very creative fanbase, so I wouldn’t be surprised if a few new presses have appeared.

Tell us about your new novel—any inspiration, influences, or context that would help the uninitiated reader enjoy your book more fully.

Bucket of Face is a story about a doughnut shop clerk, Charles, and the kiwi fruit he loves, Sarah. One night, an apple and a banana, both in pinstriped suits, walk into the doughnut shop and shoot each other in a failed mafia handoff. Charles steals what the fruit wiseguys are supposed to be exchanging—a briefcase full of foreign currency and a bucket of human faces—and disposes of the bodies by cooking them into doughnuts. This makes Charles and Sarah targets of Roma, a hit-tomato who kills and tortures people while dressed up like Michael Jackson.

This book grew out of my love of Dashiell Hammett, Raymond Chandler, Elmore Leonard, and a lot of those hard-boiled pulpy crime/detective novels, movies, and radio dramas. However, I wanted to see pulp noir Gogolized. I also like the thing Christopher Moore does in which he makes a completely realistic world and just changes one thing. Everything else stays the same. The mundane, annoying rules of the world still apply to vampires, Death’s father, Jesus’s best friend, and, in my case, to anthropomorphic fruit.

One thing about the story that I think is important to bring up is that Roma is a Roma tomato. Some people have visualized Roma as a round tomato, which is just ridiculous. The first chapter of the book is posted on my blog, FryingTheCat.com.