Book of the Week Giveaway: The Unknown Knowns, by Jeffrey Rotter 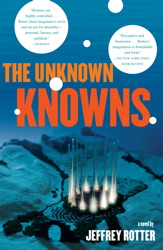 At the end of August, Fiction Writers Review launched a Fan Page on Facebook. The goal is threefold: to introduce new readers to FWR, to create an informal place for conversations about writing, and also to give away lots of free books.

Each week we’ll give away several free copies of a featured novel or story collection as part of our Book-of-the-Week program. All you have to do to be eligible for our weekly drawing is to be a fan of our Facebook page. No catch, no gimmicks. And once you’re a fan, you’ll be automatically entered in each subsequent drawing.

Last week we featured The Quickening, by Michelle Hoover, and we’re pleased to announce the winners: Gregory Parker, Cody Walker, and Kelly Allen. Congratulations! Each will receive a copy of the book, signed by Michelle.

This week we’re featuring The Unknown Knowns, by Jeffrey Rotter. As the novel opens, Jim Rath–a diorama builder by trade, comic-book fanatic by heritage, and a manchild by way of emotional maturity–has all but ruined his marriage to his long-suffering wife, Jean, with his fixation on Nautika, an underwater matriarchal paradise of aquatic apes, or Nautikons, that he believes evolved in parallel to humans. Rath’s foil is federal agent Les Diaz, who is on a mission from the Department of Homeland Security to protect the swimming pools and water parks of America from terrorist attacks. Through Rath and Diaz’s intersecting paths, Rotter presents the reader with a viscerally disturbing dilemma: can we trust ourselves?

Concluding the introduction to her 2009 interview with Rotter, Managing Editor Lee Thomas writes, “By turns darkly funny and chilling, The Unknown Knowns also contains marvelous passages that capture Jim Rath’s flights of Nautika-inspired fancy, which are so sincere and overblown it’s hard not to like the guy, in spite of his self-navigated path toward destruction.”

If you’d like to be eligible for this week’s drawing (and all future ones), please visit our Facebook Page and “like” us. As we did last week, we’ll be giving away three, signed copies of this title. To everyone who’s already a fan, thanks for supporting this project. What we want to do is not only find ways to expand our readership, but also to put books we love in the hands of readers.