Book of the Week: The Grief of Others, by Leah Hager Cohen 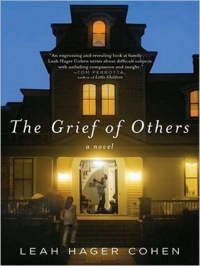 This week’s feature is Leah Hager Cohen’s new novel, The Grief of Others, which was published in September by Riverhead. Cohen is the author of seven previous books: Train Go Sorry: Inside a Deaf World (1994); Glass, Paper, Beans: Revelations on the Nature and Value of Ordinary Things (1997); Heat Lightning: A Novel (1997); The Stuff of Dreams: Behind the Scenes of an American Community Theater (2001); Heart, You Bully, You Punk: A Novel (2003); Without Apology: Girls, Women, and the Desire to Fight (2005); and House Lights: A Novel (2007).

This new novel of Cohen’s, set in the suburbs of New York City, focuses on the Ryrie family and their grief following the death of a newborn. In the introduction to his recent interview with the author, Contributing Editor Steven Wingate writes:

Ricky, mother of two and hard-shelled financial analyst, knows that the child in her womb has anencephaly—a neurological defect in which the brain and skull are undeveloped—but gives birth to him anyway, despite not having told anyone in the family about the coming tragedy of his short life. Simon Ryrie lives for only fifty-seven hours, all of them in his mother’s arms, and Cohen weaves a moving family history out of the reverberations (and preverberations) of this event.

In this interview, Wingate speaks with Cohen about such things as breaking the fourth wall, withholding judgment on characters, and the importance of ritual. In response to a question about her journalism background and how she negotiates the different realms of fiction and nonfiction as an author, Cohen replies:

All of my books, as I look back on them, seem to engage the idea of “other,” whether in the form of marginalized cultures or the private “otherness” we all sometimes feel in moments of loneliness or isolation. And I see all of them as part of a larger effort to reach out beyond that isolation, to fathom the unfathomable.

Lately I have drawn more to fiction than nonfiction, which I think has to do with my interest in exploring people’s inner lives. In nonfiction, one cannot report on someone’s psyche except in a speculative mood. Even when a subject reports on his or her own feeling state, that assessment is likely to be partial or imperfectly understood. Lately, I am liking the way fiction allows more unfettered access into complex emotional and spiritual terrain.