Every six to eight weeks Granta highlights new fiction by an emerging writer exclusively on their website. The New Voices Project has featured work by such writers as Jessica Soffer, Laura Fellowes, Soumya Bhattacharya, Hannah Gersen, Erin McMillan, Evan James Roskos, Lana Asfour, Evie Wyld, and P.D. Mallamo. In addition to original work, each feature also includes an interview with the author. For details of how to submit your story, please see Granta’s submissions guidelines.

The most recent writer to be featured as part of this project is Kenyan author Billy Kahora. Below is the opening to his story “The Gorilla’s Apprentice.”

That last Sunday of 2007, just a few days before Jimmy Gikonyo’s eighteenth birthday – when he would become ineligible to use his Nairobi Orphanage family pass – he went to see his old friend, Sebastian the gorilla. Jimmy sat silently on the bench next to the primate’s pit waiting for Sebastian to recognize him. After a few minutes, Sebastian turned his gaze on Jimmy and walked towards the fence. The gorilla’s eyes were rheumy, his movements slow and careful. Their interaction was now defined by that strange sense of inevitable nostalgia that death brings, even when the present has not yet slipped into the past. 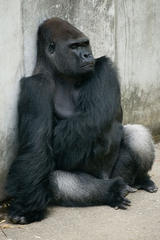 Jimmy removed the tattered pass from his pocket and read the fine print on the back: This lifetime family pass is only for couples and children under eighteen years of age.

There was a sign on the side of Sebastian’s cage: ‘Oldest Gorilla in the World. Captured and Saved from the Near Extinction of His Species After the Genocide in Rwanda. Sebastian, 56. Genus: Gorilla.’

The Sunday Standard beside him said: Nairobi, Kisumu, Kakamega and Coast Province in Post-Election Violence After Presidential Results Announced.

That Sunday morning was strangely cold for late December. When Jimmy looked around, every one of the animals seemed to agree, each exhibiting a unique brand of irritation. 11 a.m. was the best time to visit the orphanage. The church-going crowd that came in droves in the afternoon was still worshipping, so the place was empty.

He had come here first as a toddler. They acquired their family pass in the days when his father was a trustee of the Friends of Nairobi National Park but his father soon found the trips boring, and for some years, Jimmy had come here alone with his mother.

When Jimmy was twelve his father left them, and Jimmy began to come on his own, except for the year he had been in and out of hospital. That year, he borrowed a book called Gorilla Adventure by Willard Price from a school friend. He had read it from cover to cover, in the night, using a torch under the blanket and eventually falling asleep. He woke up to find the book tangled and ruined in urine-stained sheets. He had received a beating from the owner that had only increased his love for the mountain gorilla. For the rest of his primary school years he would take the lonely side in arguments about whether a gorilla could rumble a tiger, or whether a polar bear could kill a mountain gorilla.

To read the rest of Billy Kahora’s story, or to submit to Granta’s New Voices Series, please visit Granta.com.