Reviewlet: Away by Amy Bloom 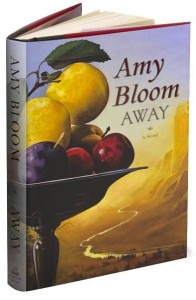 This beautiful novel by one of my favorite short-story writers follows the adventures of 22-year-old Lillian Leyb, a recent survivor of a Russian pogrom, from New York’s Lower East Side to Seattle to the remotest parts of Alaska, where she hopes to get a boat to Siberia. (The story is set in the 1920s.) After her husband and parents were murdered before her eyes and her small daughter lost in the fray (and sought for some time), Lillian emmigrated, hoping to escape her haunted past and carve out a life for herself in New York. But just as Lillian’s getting comfortable, her cousin Raisele arrives with news that Sophie, her daughter, is alive and living in Stalin’s “Jewish Paradise,” Siberia, with former neighbors. With almost no money and stolen maps sewn into her coat, Lillian sets out alone on a desperate quest to find her daughter; along the way, she finds herself relying on the kindness (or certain needs) of a diverse cast of strangers, every kind of “American” you can imagine (though Bloom resists stereotypes artfully). In New York, Lillian plays mistress to a gay actor and his well-connected father; on the train to Chicago, she stows away for 22 hours in a broom closet; in Seattle, she becomes the assistant of an ambitious African-American prostitute; in Alaska, she does time in a women’s prison.

Amy Bloom loves her characters passionately, and she loves her readers, too. This is that rarest kind of book: the literary page-turner.