This is a little revision device I’ve whipped up to try to tell if a paragraph or page or section is too soft or vulnerable, if it needs to be edited out. Or if it’s too autobiographical in a way that could lead to questioning from my grandmother’s bridge club.

You know how, after you’ve sent a risky email–maybe to someone you’re desperately in love with, or to your boss, or to a professor to lay into him a little bit when you aren’t really allowed to do that–there’s this feeling you get that maybe you should have waited until after the two (or five) “writerly” old fashioneds wore off before hitting send? But you did not heed this feeling, because while you were writing that risky email, you were so impressed with how brave you are, how honesty is so cleansing, and you care too much about what people think anyway–this time you finally let your true self shine in your own little Jerry McGuire Mission Statement type of moment, and hitting send before re-reading felt like the only logical extension of just how REAL you actually are.

Several minutes/hours/days/later, unreplied to, you feel a need to re-read this particular act of idiocy because you aren’t even exactly sure what you said–you just were so in love with your own clever bravery that you might have perhaps phrased things less than subtly. So, you open your Sent Mail file and re-read the missive, but this time you play the role of recipient. Said love-interest or boss or teacher is just minding his own business when lo and behold, there’s a landmine in his inbox, and where the hell did this come from!? And meanwhile, you–back to being actual you–are now HORRIFIED that you sent such a purple, prosaic, telling, tell-all, schmaltzy piece of GARBAGE, and you don’t even understand what possessed you to type such nonsense, much less send it to another innocent and important human being who now has to pretend to take seriously your self indulgent little rant/love-letter/promotion demands. You don’t even understand what possessed you to type at all. OK, maybe it’s just me. But hear me out.

Sometimes, if there’s a paragraph in my writing I’m not sure about–because it’s possibly so dazzling I could count its karats, but also possibly leaning more “tell” than “show”–I email it to myself and pretend to read it as somebody else. My dad, say: a nice objective guy. Or my thesis adviser, who takes BS from nobody, or my boss, who uses air quotes around the word “feelings.” Then suddenly what I had thought was a really deep and meaningful exploration of love and landscape suddenly reveals itself as the load of poppycock it actually is–teenage angsty ramblings from a 30-year-old going on 13. By emailing a paragraph or a page to myself and opening it up as Sent Mail, I get a glimpse of how the sentences land on someone other than myself. Someone unsuspecting and polite, who doesn’t really want to hear about all of these huge realizations just now, the coffee isn’t even made yet. And dear, God, this person is a little upfront with personal stuff–does TMI mean nothing?

(This is not to say you should be thinking about your dad and boss and grandmother and thesis advisor during the first draft stage. Just the opposite. During the first draft stage, you want to silence all those little schitzoid voices in your head and write as if no one is ever going to read it. But then, in the edits phase, invite your little imaginary friends back to the party for a while…until they start to bring the place down. Then kick ’em out again.)

Fiction can be like a risky email, especially when stakes are rising for your characters and there’s a lot on the line. Sometimes it’s hard to differentiate what’s good and what’s bad in the heat of a writing-streak. Sometimes, letting emotional pieces of yourself sneak into your prose actually is the bravest thing you can do. And sometimes, it’s just the way you needed to relate to the material, but afterwards, it lifts right out, like a stain.

Real moments don’t always announce themselves as such from the get-go. Honesty doesn’t have to mean confessional. Save yourself the embarrassment–write the email. Hit send. Just make sure the recipient isn’t actually another person who could read it. 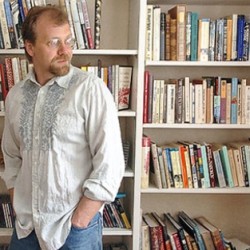 Vampires in the Lemon Grove, by Karen Russell