Fall has swept in to this part of Michigan, bringing with it the low, gray clouds and cool weather of October. But even with the overcast skies of the past few days, my spirits are still high after our State of the Book literary symposium two Saturdays ago. Nearly 900 people attended the symposium’s seven events, which stretched over eleven hours. And more than 30 authors with Michigan roots participated in the day’s readings, panels, and conversations.

We also had the next generation of authors on hand. In fact, they kicked off the event! 826michigan timed this year’s OMNIBUS anthology to be released at The State of the Book. And 826 Founder Dave Eggers was on hand to introduce the unveiling of this year’s collection. He spoke of his own first publishing experience in elementary school, bringing with him a copy of his illustrated story The Monster Mish Mash, which he showed off for the audience to wonderful applause. His funny yet moving talk about the importance of recognizing the work and creativity of young people set the tone for a day of celebration, and we are thankful to 826michigan and Dave Eggers for being such a big part of the day’s success. 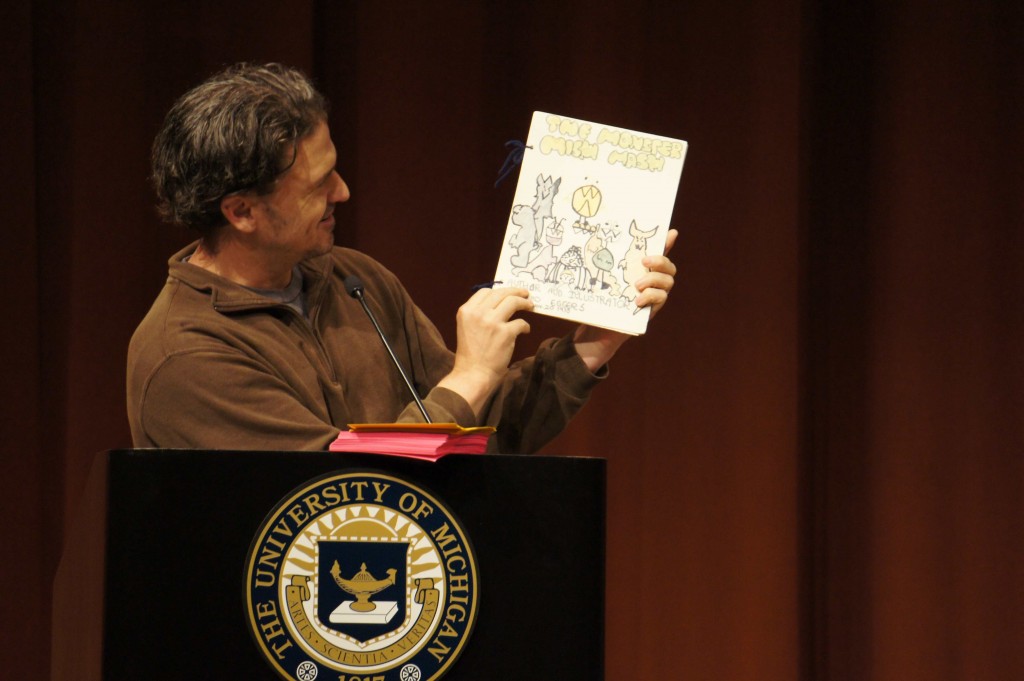 Equally inspiring was the energy of the kids themselves. Prior to the anthology’s unveiling, 826michigan staff members Amy Sumerton and Catherine Calabro facilitated a lively reading with several of the elementary school children whose work had been published in the anthology. And at the end of things, Ms. Rodriguez and the students from her 2011-2012 class at Wines Elementary got up on stage to read a story they’d collaboratively written the previous year, one that was included in the OMNIBUS.

The rest of the morning was equally exciting. Poets from the U-M Collegiate team, the Neutral Zone’s VOLUME Youth Poetry Project team, and the InsideOut Literary Arts Project slam team gave amazing and moving performances. I found myself on my feet cheering for these young writers, amazed by their ability to not only channel such complex emotional landscapes but to also weave humor into the pathos. When detractors bemoan the state of our youth, or tell us that this generation has been lost to its digital devices, I would like to refer those naysayers here. Sophistication, artistry, and self reflection were on display, as well as a love of and facility with language that would make any writer envious. Couple this with the enormous talent and dedication that it takes to deliver your work from memory and, well, what we saw on stage was nothing short of awe-inspiring.

For the next several hours hundreds of people moved through Rackham, attending panels and discussions in the Auditorium or chatting in the lobby with editors at the Book Fair. We also had author signings and a letterpress demonstration by Fritz Swanson. It was a small sample of the tremendous amount of literary work taking place in this state, but yet another glimpse of Michigan’s creative economy flourishing. 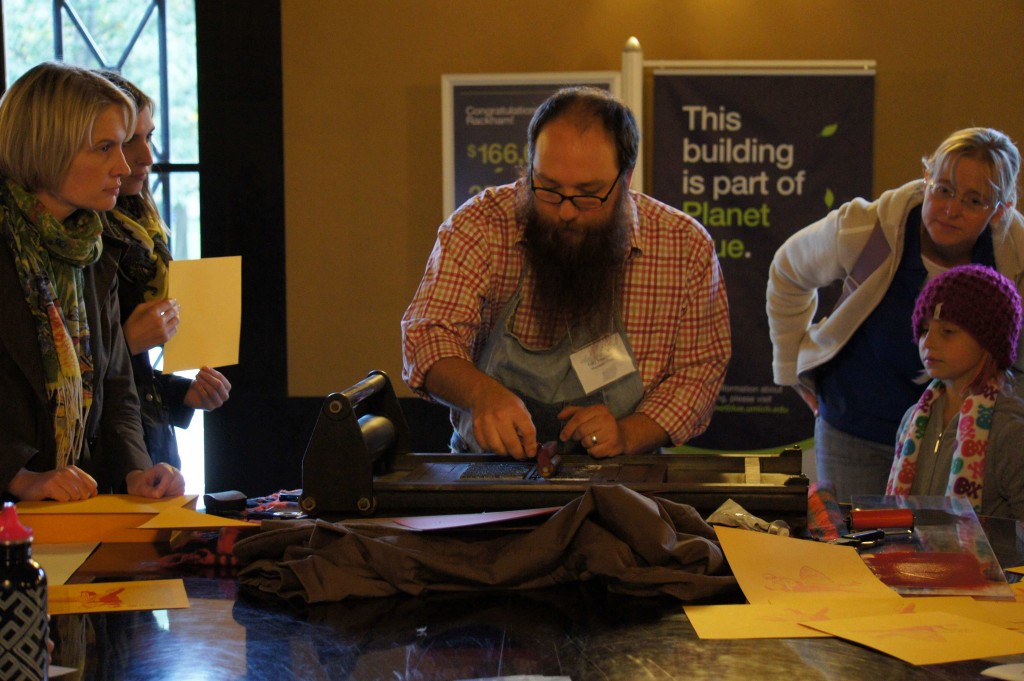 After an afternoon of panel conversations on “The First Book” with debut authors, “Innovative Publishing” with editors of literary journals and indie presses, “The Future of Literary Journalism” with magazine writers and editors, and “Writing Michigan(s)” with prominent Michigan authors, we arrived at the big finale: our keynote conversation with Charles Baxter and Philip Levine.

Just before 7pm hundreds of people began to stream through the lobby and into the auditorium. As people settled into their seats, you could sense the anticipation in the air. It’s a cliche thing to say, I know, but nonetheless true. Yes, perhaps some of the anticipation I was feeling came from my own nervousness about being the one who would introduce these literary legends. Yet I don’t think I was alone in this sentiment. You knew sitting there that this was a big event. And despite the size of the 1,200 person auditorium, it still felt intimate. It felt close.

Baxter and Levine were joined by moderator Michael Byers, author most recently of the novel Percival’s Planet and director of the University of Michigan’s MFA Program in Creative Writing. Byers led Baxter and Levine through a marvelous discussion of the intersection of spirituality and writing, the role of memory, how the past finds its way into our work, and whether it’s truly possible to write seriously in the face of global calamity. Yet despite how serious those topics might sound, dear reader, I can assure you their exchange was filled with humor and banter as well as thoughtfulness. I can’t say what a treat it was to witness the conversation that night. In a season of political debates, it was a welcome change to discuss the state of literature, the state of the creative economy, and the state of books. I am happy to report that all three are alive, well, and flourishing! 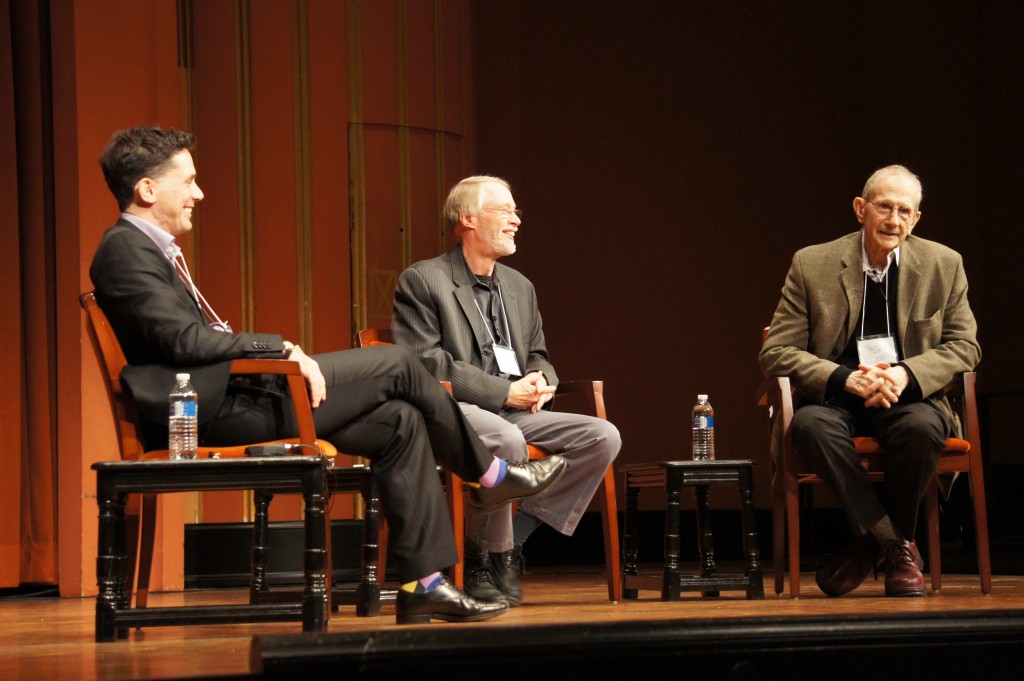 Whether you joined us in person at Saturday’s events or you were with us in digital spirit, we’d like to thank you for your support. It was Fiction Writers Review’s great honor to conceive of and launch this celebration in partnership with the University of Michigan’s MFA Program in Creative Writing, and we hope that The State of the Book might become an annual event. We’d love to have the opportunity again to celebrate such a diverse range of authors, as well as the literary organizations that foster their work at each stage of their careers.

Finally, I’d like to recognize the amazing help we had in kicking off this event. In addition to our non-profit partners (826michigan, Dzanc Books, InsideOut Literary Arts Project, the National Writers Series, and the Neutral Zone), we also received a Major Grant from the Michigan Humanities Council, for which we are grateful. We had further financial support from dozens of local and national sponsors, including The Department of English at the University of Michigan, Glimmer Train, Espresso Royale, The Knight-Wallace Fellows, Poets & Writers, and Michigan Radio. For a complete list of sponsors for this event, please visit the Event Sponsors page on The State of the Book website.

We also had an army of student volunteers. We could not have made The State of the Book possible without The Undergraduate English Association (UEA) and The Undergraduate Research Opportunity Program (UROP) at U-M. These volunteers and interns helped us coordinate the day’s festivities and served as our ushers, guides, and ambassadors during the event itself. You have our great thanks! 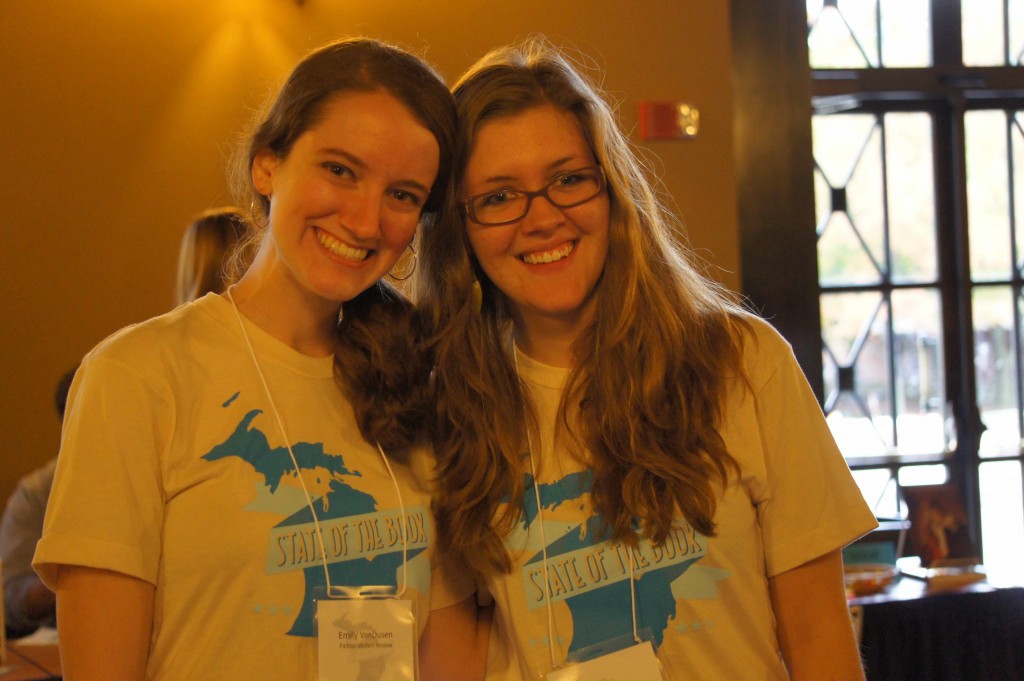 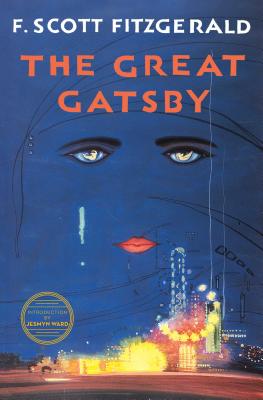