"Do not imagine you can exorcise what oppresses you in life by giving vent to it in art." --Gustave Flaubert Practitioners of fiction may find this Flaubert quote hard to embrace, because if we’re honest with ourselves we’ll probably have to make some difficult admissions. Many of us—especially those who fell in love with the craft early, perhaps under the spell of Austen or Kerouac or Salinger—embarked on the fiction endeavor with an eye toward self-discovery. Most writers started writing because we found ourselves immersed in the character-self vortex as readers, identifying with fictional characters so intensely (as we searched for ourselves in them) that it became second nature to live in their worlds. From there it’s a small but decisive step to the other side of the formula: entering into the vortex as a writer and deciding to participate in literature as a transmitter of emotional signals rather than as a receiver alone...

Part 1 of this essay appears here.

“Do not imagine you can exorcise what oppresses you in life by giving vent to it in art.”
–Gustave Flaubert 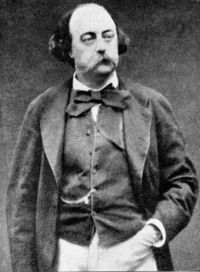 Practitioners of fiction may find this Flaubert quote hard to embrace, because if we’re honest with ourselves we’ll probably have to make some difficult admissions. Many of us—especially those who fell in love with the craft early, perhaps under the spell of Austen or Kerouac or Salinger—embarked on the fiction endeavor with an eye toward self-discovery. Most writers started writing because we found ourselves immersed in the character-self vortex as readers, identifying with fictional characters so intensely (as we searched for ourselves in them) that it became second nature to live in their worlds. From there it’s a small but decisive step to the other side of the formula: entering into the vortex as a writer and deciding to participate in literature as a transmitter of emotional signals rather than as a receiver alone.

If this has happened to you, then you probably know when. For me it was in my senior year of high school, simultaneously reading Heart of Darkness, Miss Lonelyhearts, , and Wise Blood as I caught up on my long-avoided English credits. Watching all these disparate characters try so desperately and dramatically to figure out their places in the world gave me hope that that I, a mere drop in the endless bucket of angst-ridden teenagers, actually had a shot of figuring it out myself. I wasn’t doomed to insignificance because the characters I read, even if they failed to find themselves, managed to avoid insignificance through their quests. By the end of that semester in high school I had decided that I wanted to dedicate my life to writing fiction. (Avoiding that decision for almost two decades is another story.) I had ingested completely the idea that the manifold, incomprehensible self is most clearly apprehended in fictional characters and narratives, and however professional I may feel about my writing today, I am still that same word-besotted teenager whenever I put my fingers to the keyboard.

I didn’t know about Flaubert’s quote then, and I’m half glad of it. If I had been warned that the writing life would not provide me with the key to the self that I sought, I might have stuck with wanting to be a primatologist and never discovered the joys of fiction at all. On the other hand, I might have embraced fiction with more realistic expectations had I heard this bit of news, and perhaps not have needed such a slow pas de deux with the art form in order to commit myself to it. At the very least I would have become more quickly aware of a seam in the patchwork that is the writer’s relationship to his or her characters—one that every writer must renegotiate with every new piece of work, and even with each draft. But knowing today that Flaubert is right does not prevent me from sometimes hoping that my fiction will help me figure out my life, or at least lay it out on the dissecting table so I can examine it more dispassionately. Here are my neuroses. There are my fears. There are the strengths I don’t embrace. Isn’t that a reasonable expectation? Can’t I, after all these years of apprenticeship, at least rely on fiction to let out the demons inside me so I can know them better?

Sadly, all evidence is to the contrary. I can rewrite the same kinds of characters over and over—menacing fathers, art-struck women, proletarian social climbers, etc.—and new versions of them spring up again, with ever-new sets of psychic problems. Writing seems to exercise one’s demons more than exorcise them, so it’s a fallacy to believe that the exorcism Flaubert mentions is a necessary part of fiction at all. Most veteran fictionists don’t bother expecting exorcism, yet they still go back to the same caves where their oppressive demons live, digging around time and again as if expecting to learn something new about their characters even after decades of excavation in the same sites.

There is nothing faulty in this. Melville did it, Woolf did it, Flaubert did it. It’s part of the territory, part of the authorial schtick that the non-writing public labels as love for our own problems. But one can engage in this process responsibly and productively, or irresponsibly and frustratingly. An enabling attitude about it involves understanding what Flaubert meant by “giving vent,” as well as how this differs from exorcism. Venting releases excess energy from a source, while exorcism attempts to denature the source entirely. These are fundamentally different psychic actions, and confusing them does a writer no good. Flaubert’s dictum does not merely suggest that writers are stuck with their unexorcisable problems for life, but more specifically warns against a conflation of two disparate processes that might appear to be more related than they are.

So if we focus not on “exorcising” what oppresses us and instead on “giving vent” to it, shouldn’t we then be able to achieve greater self-knowledge without trying (in vain) to solve our problems entirely? Shouldn’t we be able, in writing about the characters that arise from our psyches, to consciously know those psyches better? Flaubert doesn’t offer us much hope here, and cautions us against using our art as a means to know our problems better. He doesn’t say “Don’t try to solve your problems, just vent them instead.” (In fact, he doesn’t seem particularly fond of “venting” at all.) There is in his words a fundamental disagreement with the idea of instrumentality in art-making, and from this we can intuit that any self understanding we achieve in the author/character vortex is a mere byproduct of the creation of art, not by any means a goal.

This leaves fiction writers in a pickle, since we invest so much time in understanding characters that irrefutably stem from us. Aren’t we all, to varying degrees of self-awareness, stirring up our own muck anyway? Yes, of course we are—but the more important question is of our intent and expectations as we stir. We can certainly achieve some mental clarity from our fiction, but doing so with that intent is as inefficient as digging through a mountain with a toy shovel. Only the most masochistic among us would attempt to exorcise (or even vent) oppressive personal issues by writing novels when a few visits to a therapist might do. And those who try to use fiction as therapy will likely find their work over-thought and trapped in the writer’s self.

Artists of all stripes have traditionally resisted dealing with their demons (and even mental illnesses) for fear of destroying their creativity, and writers are no exception. A little edginess, we may think, is good for the work, so we are tempted to cultivate our oppressing demons in the hope that they will fuel us to greater creative heights. But we are misguided to enter the practice of fiction with this intent, which is no more enabling by nature than a desire to know the self. Certainly we will see the self when we open up the Pandora’s box of the stories we must tell.

Flashes of understanding may come on the tenth draft of one piece, on the third of another; but this process is so gradual and so unpredictable that we are better off expecting nothing from it at all. The things that oppress us are admittedly going to be vented while we dig through the lives of our characters—a fact of life that Flaubert’s quote acknowledges, though it does not necessarily embrace—but if that’s why we write, we’re wasting our time. And we’re also reducing the art of literature to mere self-expression, which ignores its longstanding role in the way cultures understanding their world and their times.

I wish I had known this decades ago, when I fell in love with fiction as a lifeboat to get me out of my personal teenage mess. I spent a lot of time being too aware of my attempted exorcisms, and tried to solve the problem of myself on the page when I should really have had one goal: to render honestly the problem of the self in my characters, who are not me (as Raymond Carver pointed out), although I am them. Maybe it was no coincidence that I couldn’t get serious about writing fiction until I was in my thirties, by which time I had given up any illusions about exorcising what oppressed me. Maybe that giving up is what it took to set me free to plunge into the vortex of the self—as fiction writers must—but never expect to find the self lurking there.

– For more of Flaubert’s ideas on fiction and identity, explore his letters as published in The Letters of Gustave Flaubert: 1830-1857, edited and translated by Francis Steegmuller (Harvard UP).

– Read about Flaubert’s writing habits on the Daily Routines blog.

– Support Powell’s Books and further consider the author/character vortex by buying and reading work by Flaubert. [Editor recommendation: the gorgeous novella A Simple Heart, as translated by Charlotte Mandell (Melville House, 2004), originally published in a collection with two other stories as Trois Contes in 1877.])