"For me the short story is family. I didn’t choose it; it chose me."

An Interview with Jason Brown

"A linked collection has the luxury of telling a story that doesn’t quite hold together or go anywhere." Marjorie Celona interviews Jason Brown, whose linked collection, A Faithful but Melancholy Account of Several Barbarities Lately Committed, is out now from Missouri Review Books.

I met Jason Brown in the spring of 2015, when I interviewed for a faculty position at the University of Oregon. We walked through the heavily treed pathways of campus, complete with little painted-on yellow duck feet—because, you know, the Ducks—while talking about Alice Munro. We also talked about depression, having children, and how to stay sane on the tenure track.

When I became Jason’s colleague that fall, we began swapping stories. I read the stories in A Faithful but Melancholy Account of Several Barbarities Lately Committed (Missouri Review Books, 2019) over a period of several years, their power building, the book taking shape in my mind. Here we meet the Howlands of Maine, whose patriarch, John Howland, casts a long shadow over his grandson, John Howland, who is set to inherit the family home. But Howland Jr. is adrift—a recovering addict who is slowly seeing his toxic family with clear eyes.

In a sense, this is a collection about doubling, identity, and doppelgangers in the vein of Conrad’s “The Secret Sharer” and Cheever’s “Goodbye, My Brother.” John Howland Jr.’s future is the real story here, but whether that means a needle in the arm or a place at the table of the anointed is yet to be seen. Also, it’s (in part) about children and people who hurt children, which is the most important thing anyone can write about. Did I mention it’s also laugh-out-loud funny? I don’t think there’s anyone out there writing like Jason Brown.

I interviewed Jason over email, me in Oregon, him in Colorado. In between questions, we sent each other pictures of our daughters and our dogs.

Marjorie Celona: What’s the deal with your striking and super-long title? It’s old-fashioned and moody, and suggests to me that the reader is about to embark on an epic adventure, possibly at sea. What is its significance? Were you pressured to shorten it or change it?

Jason Brown: In the process of putting this book together, almost everyone suggested I change the title, which suggests that I don’t care about the reader. Not true! The title refers to a Cotton Mather sermon on the tragic and barbaric treatment of Anglo Saxon Protestants at the hands of New England’s native people. We all know how that turned out. In the context of the story (a fake wedding on an island in Maine), the title is meant to be funny. The historical context is, of course, not funny, though nothing is funnier than people who don’t understand their lives in historical context. Except when it’s not funny. 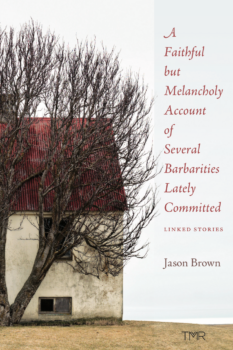 How is writing a collection of linked stories different from writing a novel? Do you consider them to be different genres? If so, in what way(s), and why was this the best vehicle for this particular set of characters?

I love reading a good novel, but the linked collection has always been my favorite form. When I first read Love Medicine by Louise Erdrich, my jaw dropped. While some people I knew felt as if the book straddled an awkward territory between the novel and a collection of stories, I felt that it was written for the way my mind works. Other linked collections have had a similar effect on me. Alice Munro’s books, Sebald’s The Emigrants. These books present cohesive but fractured narratives.

Even a novel as broad and deep as Anna Karenina labors under the tyranny of plot. A linked collection has the luxury of telling a story that doesn’t quite hold together or go anywhere. A book with plenty of texture and character and internal tension that has no resolution. A lot like life.

John—the main character—appears in only five of the ten stories. What is the thread that links this collection, if not solely John?

I think this is a common characteristic of linked collections. From a practical standpoint, it is difficult to restart a story ten times in a single collection with the same main character. Many people have done so successfully. Alice Munro did it twice with Lives of Girls and Women and The Beggar Maid. Denis Johnson did so with Jesus’ Son. But Love Medicine, for instance, has a large cast of characters. Hemingway’s In Our Time takes a break from Nick Adams.

In my case, the main character John is part of a larger family. The book is as much about the larger family as it is about him. When you read about his cousins or his grandparents, you are learning about John as well. Novels can also focus on multiple characters, but the conventional multiple point of view novel is usually constrained by a strong plot. Whatever doesn’t fit the plot is thrown out in the revision process. A linked collection with a strong main character allows the writer to include stories by other characters that counterpoint the main character’s story and diverge from the main character’s story in significant ways. Stories emerge from life, but life is so messy and fractured that many conventional plots end up feeling artificial to me.

What’s your obsession with Maine now that you no longer live there? Would you ever set a collection in Oregon? Elsewhere? Can you talk about why place is an important factor in your work?

I have lived in many places and travelled to even more places, but I am from a particular place—northern New England—where my family has lived since the early 1600s. I was raised among grandparents, uncles, aunts, cousins, and I was not, except for my last year of high school, raised in a city. I don’t like cities, and I don’t like the suburbs. There are positive and negative aspects of American popular culture for society as a whole, but for the most part I agree with George Saunders’s indictment of American capitalism and how it has destroyed our spirit and made us into products and consumers.

I also think that irony, satire, and dystopic fantasy are not very satisfying artistic responses in the end—not for me. I think too many people have spent the last fifty to seventy-five years trying to forget about rural America. In the wake of what we call global capitalism, many rural Americans (and people all over the world) have lost their sense of family, tradition, heritage, land, and ways of making a living. Those are real losses. But something greater is lost when efforts to hang on to the past and even turn back the clock turn into fear, bigotry, and xenophobia. We can’t go backwards, and the way forward has never been more uncertain.

I think that’s what my book tries to capture. My book is about a family that has lived in the same place for almost four-hundred years. Now, at the end of the twentieth century and the beginning of the twenty-first, they are starting to disperse and leave behind their connection to place and family and cultural identity. The story of America in the second half of the twentieth century is one of dispersal and movement away from the roots of the past.

I don’t know if I will ever write about another place. I am an emigrant from a very distinct culture that I can’t return to and don’t want to return to even though I miss it more than anything else.

I think too many people have spent the last fifty to seventy-five years trying to forget about rural America.

What have you been working on besides this book? What are you working on next?

I’ve always tried to write in other forms, but I keep coming back to the short story. That happens to some people. My mentor at Stanford, Tobias Wolff, said so about his work. Alice Munro said in an interview that she would love to try other forms, maybe the essay, if she had time to learn how to write one (!). That’s commitment to form. I don’t have that, wish I did. I’m wishy-washy. For me the short story is family. I didn’t choose it; it chose me. The story is like the gateway drug of fiction—try me out, see if you like it, no serious commitment. Then suddenly you’re old and you’ve been writing stories for twenty years instead of talking to people and making money—worthy pursuits, I am told.

Anyway, I’ve written a novel that I am getting ready to sell. I am working on a memoir, which feels like confessing that I live in a one-room apartment with sixty gerbils, and I am writing a book with my sister about her work with humanitarian causes in Afghanistan, Haiti and Iraq. The latter project seems promising because it’s not about me or some fictional avatar of me. It’s about real people who have suffered terribly and about people who live in the real world (as opposed to the academic one) trying to do something about suffering. 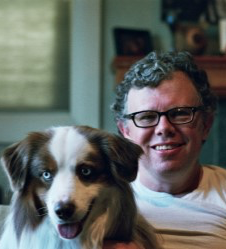 What is the very first story you ever wrote, and what is the most recent one? Talk to me about how you’ve changed as a writer between writing those two stories.

I wish I could remember the first story I ever wrote. I think it was about a soldier. When I was young, I always assumed I would be a soldier. Many people over the generations of my family served in battle, and when I was young I could not imagine anything more glorious or romantic. This despite the fact that my grandmother told me that war was stupid and tragic—she’d lost her brother and almost lost her husband, my grandfather. By the time I was a young man I knew I was, as my father once told me, too sensitive for my chosen pursuit. Or just about any pursuit. Prone to drinking too much, feeling too much, and thinking too much, I turned to writing. Ever since then I’ve written about weakness, except for the last story I wrote, “Sarah Campbell’s Story,” which happens to be the last story of the collection. This story is about the extraordinary strength of a Scottish woman who came to the Maine coast in the eighteenth century, as many of my ancestors did, and survived incredible hardship. Her story is based on a real story, which is maybe why I have such affection for it.

What books, if any, inspired this collection? Which writers do you return to, again and again, and why?

A real list would be too long. But some at the top are the stories of Alice Munro, Annie Proulx, Joan Silber, Louise Erdrich, Juan Rulfo, the New England writing of Ernest Herbert, WG Sebald, and I always go back to the stories of Flannery O’Connor, JD Salinger, John Cheever and Nathaniel Hawthorne. 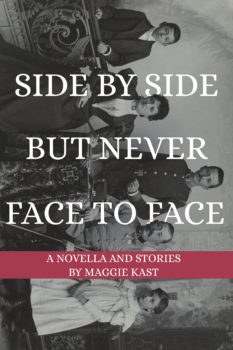 To Go Beyond: An Interview with Maggie Kast 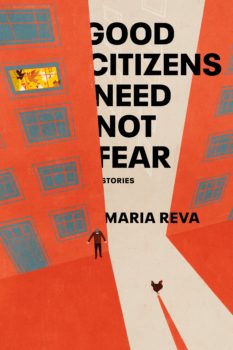 Between Humor and Darkness: An Interview with Maria Reva 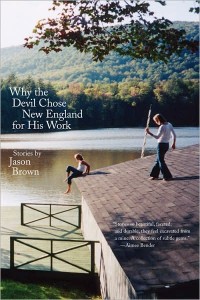