"My books all chronicle social tension at a particular time and place, and my protagonists are caught up in it."

Nancy Kilgore lives in Vermont, some 3,000 miles from my own Olympic Peninsula in Washington state. I think of her as my friend in Vermont, though we’ve never met, except by email. Our first exchange goes back eight years now when we exchanged novels-in-progress for comment. I read the manuscript of what would become Wild Mountain (Green Writers Press, 2017), and, more recently, her latest novel, Bitter Magic (Sunbury Press).

In each of her novels, including her debut, Sea Level (Quinnebec Press, 2011), Kilgore has a voice both lyrical and intimate, her prose has beauty and nuance. Each novel embeds the soul of her character in a place rendered with authenticity, even as the female protagonist finds herself in conflict with the culture the place has spawned.

Bitter Magic has these qualities on full display. But her new novel makes a sharp turn from contemporary America to Scotland of the 17th century. It takes the reader on an arresting journey into the world of Isobel Gowdie, and her trial for witchcraft. Kilgore conjures this world and these events not solely from her fertile imagination, but from actual documents preserved in church, court, and her own family history.

For a while now books featuring witches have been hot reads. What I find uniquely intriguing about Bitter Magic is its rendering in a Christian context. In the course of researching the novel, Kilgore traveled to Scotland to see what clues the land and its people could unearth. Moreover, her training as an ordained pastor in both the Presbyterian and the Congregational traditions qualifies her most particularly for manifesting this link.

Nancy Kilgore and I talked recently about the novel, the experience of researching and writing it, and what it was like to find this fascinating story in her family tree.

Ruth Linnea Whitney: How did you come to learn about Isobel Gowdie and your family’s connection to her? And how did you feel when you made the discovery?

Nancy Kilgore: First, I found the family! I come from a long line of Presbyterian ministers, and in the 17th century some were called “Covenanters.” What did that mean? I wondered. I discovered that this group of several thousand people in 1639 signed the National Covenant. In this they pledged to oppose and resist the English kings and the doctrine of the divine right of kings. This triggered lots of battles and bloodshed during the Scottish Reformation, and the zealous Covenanter reformers fought and died for religious freedom.

But the Covenanters were also adamantly opposed to witchcraft; they hunted and prosecuted women as “witches,” and one of the most famous witch trials in Scottish history was held in the Covenanter stronghold of a family named Hay. Hay is the original Scottish form of my birth name, Hayes. (I couldn’t trace my Hay ancestors back that far, so I don’t know if there’s a connection.)

I was both appalled and intrigued. Could my ancestors have been witch hunters? I was hooked and began my research.

How did your travels to and within Scotland impact the writing of the novel? 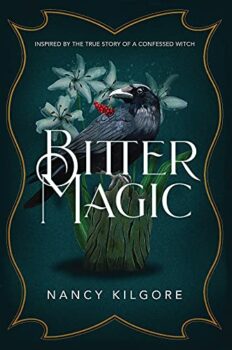 I was struck by how wide and open the landscape is, with moors and rolling fields extending to the mountains and the sea, and a great looming sky above. The atmosphere is moody and mysterious, a land where magic and mysticism are woven into history.

It was eye-opening, too, when I visited some castles that featured in Bitter Magic, to see how primitive life was, even among the gentry, in that era.

What I most wanted to visit, though, was Isobel’s fairy mound. In her witchcraft confession, Isobel told of meeting the fairies at a place called the Downie Hill. This is a real place near Nairn, now known as an Iron Age hillfort. So, with my new Scottish friend, I went on an adventure hunt. Finally, we found the mound, surrounded by farm fields and hidden in a grove of trees called the Downie Wood. We trekked into the Wood and then climbed through overgrowth and bracken to the top of the mound.

Here was where Isobel came to commune with the fairies. We stood in silent reverence. The fairy queen did not step out of the mound like she did for Isobel, but we felt a deep quiet and presence here. This was a sacred place, a place to be at peace and at one with spirit and nature.

The female protagonist in each of your three novels finds herself in conflict with the prevailing culture. Does this tension reflect a place where you tend to find yourself? Or, do you feel it is a standard element of literary fiction?

Yes, my books all chronicle social tension at a particular time and place, and my protagonists are caught up in it. In Sea Level Brigid is a new minister at a time when women are just beginning to enter the clergy amid lots of opposition. The prevailing culture was not favorable to women ministers in the early ’80s.

As for me, though I entered the clergy in a later time period, I did experience that opposition to some degree. I’ll never forget one of my ordination gifts: a book from one of my mother’s friends that “proved” women should not be ministers! Luckily, though, I had lots of support, including from my mother.

I also inherited a passion for social justice. My Presbyterian minister grandfather was a pacifist during World War I, and on the other side, my grandmother was a suffragist. I became a feminist early on, protested the Vietnam War, and in the church, I was most fervent about fighting the church’s ban against LGBT ordination and marriage. In 2018, after many years of this fight, the Presbyterian Church finally affirmed it.

In Wild Mountain Mona stands up for legalizing gay marriage in the midst of homophobia and conflict in her community.

In Bitter Magic I think of both main characters, Isobel and Margaret, as pre-feminist feminists. In different ways they each combat patriarchal power run amok during the witch hunts.

Here’s what I remind myself: Whether someone wants to publish it or not is not the important thing. The greatest reward of writing is the writing itself.

The two young women, Margaret and Henrietta, reflect distinctly different ways of responding to the culture of the time. Did you start out knowing this difference? Or did it reveal itself to you as you went along?

Margaret is an independent thinker and a rebel against the restrictions of her church and culture, while Henrietta is more conventional and accepting. Margaret was in the story from the beginning, but Henrietta came in gradually. When I learned about the raids by Catholics and Protestants on each other’s lands and castles, and their practice of kidnapping young women as wives, this worked into Henrietta’s story. Now Margaret the Brave could use everything available, including getting herself more deeply embroiled in Isobel’s magic, to save her best friend.

Isobel Gowdie comes across as a character of complexity, not all black or white. Can you talk about this complexity?

Isobel has goodness of heart and uses her powers to heal others, but at the same time she is angry at the culture that denies her, that dismisses and devalues her traditional beliefs and practices. When her outrage at the oppression of the poor and the killings of other “witches” comes to a head, her magic turns dark, and she uses it for vengeance against the powerful patriarchy who justify their actions by their theology.

Who Isobel was in history, whether moral or immoral, whether psychic or psychotic, shaman or imposter, was not known in her time and is a mystery still unsolved. I try to convey that enigma in Bitter Magic.

Reflecting on your three novels, was there one easier or more difficult to write than the others?

I suppose the first one, Sea Level, was the hardest. I had an urge, or itch, to write a novel, but I didn’t know anything about fiction writing. I embarked on a process of writing happily away anyway, but then I judged what I wrote to be terrible and put it away. Going back and forth in this way, I finished a first draft. On the good advice of an editor, I then took a fiction-writing course for two years at Radcliffe and rewrote two more drafts. I kept revising and revising, judging it as awful, and putting it away in a desk drawer for months until someone would ask, “what happened to that novel you were writing? I liked it.” That was all I needed to tackle it again. Twenty years after its beginning, Sea Level was published. But still the hardest thing about writing is the self-censorship that I continually face and have to get past.

Here’s what I remind myself: Whether someone wants to publish it or not is not the important thing. The greatest reward of writing is the writing itself—allowing oneself to immerse in a world of imagination, words and language, an adventure of discovering what you didn’t know was in you and writing it.

Talk about the name Bitter Magic.

To me, it’s a conundrum, almost an oxymoron. The word “magic” to me sounds lovely and enchanting, but combine it with “bitter,” and it implies using magic out of ill will. Isobel’s magic is both. I actually had a long list of titles and put them on Facebook, asking my friends to vote. They picked Bitter Magic, which, luckily, I liked best too. 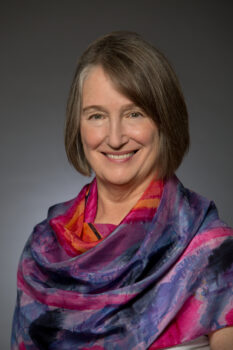 I’m curious how you as a previous member of the clergy feel about your predecessors in the 17th century and how they come across in your novel.

In seminary I learned to value my predecessors in the Reformation who fought to get rid of corruption and power abuse in the church. They struggled for the rights of each person to understand God without being dictated to by clergy, bishops, or kings. But I didn’t know about the Covenanters, who were part of this idealistic group. I later discovered that they lived in the heart of the witch hunting regions in Scotland. Like the rest of the culture, both Catholic and Protestant, they were caught up in the fear and misogyny of the witch craze. How could they be so liberal and progressive (for their time) and at the same time so misguided and murderous? This question, along with Isobel’s story, started me on my research.

How do you see Bitter Magic fitting into the panorama of novels about witches?

I wanted to stay away from the “good witch/bad Christian” stereotype and look at all the characters in more depth. The story includes an attempt to understand the Covenanters with empathy, rather than dismissing them as all evil, and to see the underside of the “cunning woman” as well as her goodness and earth-based spirituality.