"I’ve always had a soft spot for the bad guy. The kind who are vulnerable underneath all that toughness."

"This novel has consumed me": Maryl Jo Fox chats with Diana Wagman about her debut novel, Clara at the Edge, out next Tuesday from She Writes Press.

Clara at the Edge, Maryl Jo Fox’s debut novel, is the most unusual road novel you are likely to encounter. The heroine, Clara Breckenridge, is 73 and has a lot to settle before she dies. She is tortured by unresolved issues surrounding her daughter’s death and is alienated from her son, Frank. Her trip is actually a spiritual journey. She seeks forgiveness and reconciliation.

When she was a child her abusive father came after her in their North Dakota barn, but she was saved by a swarm of magic wasps. From the novel’s beginning, she is fleeing, sometimes toward, sometimes away from something. But her fears are so deep that she needs help to move forward spiritually. Hence the magic wasps. Her flight takes her from North Dakota to Oregon to Northern Nevada to New York City. Along the way she engages in a massive struggle—with herself.

Early reviews of Clara at the Edge have called Clara “a fascinating, feisty character” and noted that “[t]he writing is haunting and lyrical, and frequently ripples with humor and heart.”

My first contact with Maryl Jo came through Aimee Bender, an old friend of mine, who told me that Maryl Jo had spent nine years working on a novel and wanted to have some professional editing. She thought Maryl Jo and I had a lot in common in our use of magical realism. We ended up working together on and off for almost two years. I was so happy to see Clara at the Edge take its final form.

This conversation took place at our favorite coffee shop in Pasadena, California.

Diana Wagman: So, Maryl Jo, how are you connected to Aimee and what has she meant for your writing?

Maryl Jo Fox: I had started a novel in the ’80s, but it just wasn’t working. On a lark, I took this class in “Magic, Surrealism, and the Absurd” at UCLA . That’s where I met Aimee. She gave the class the most ingenious exercises designed to help us get below the surface of reality and write exciting prose. They were very simple. She might say pick a book with a green spine. Turn to page 75. Take the first sentence in the first paragraph and use that as the first sentence of a story. First draft due next class meeting. Somehow those exercises opened a window into my mind. It was so exciting. I got five published stories and now a novel out of those exercises and more that I need to work on. 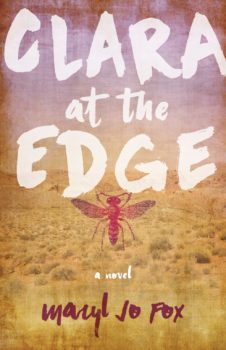 So many things about this novel are unusual and exciting for me. For one, the protagonist, Clara Breckenridge, is seventy-three, a strong, eccentric, wholly original creation—haunted by her past, desperate to resolve family issues before she dies, all the while running from them. And her best friends—her only friends—are a group of magical wasps.

Why did you choose Clara as your protagonist?

The passion of living affects every person, no matter how old. Sometimes I wonder if this passion intensifies as we get older. I think it’s a disservice to assume that this life force becomes weak as we age. I wanted to show an older woman in full throttle as she learns the high stakes of staying alive in any meaningful way for herself.

Why is Clara so tied to her house?

It has been her cocoon. She ran away from her parent’s home to avoid an abusive father. Magic purple wasps came out of nowhere and scared her father away. Clara’s goal is to find safety with people who love her and whom she loves back. These are life-long tasks. You can’t do all this from inside a cocoon. She also wants to resolve tensions with her son and confront guilty secrets about her daughter’s death. But she’s scared and stubborn and the wasps have little time to live. Clara must face her deepest fears before she loses everything she values most. But in Jackpot, her life is suddenly turned upside down by two troubled young people (no spoilers).

It takes a surprising act to break out of her cocoon—and yet you write about Edie and Dawson, the “bad guys,” with such love.

I’ve always had a soft spot for the bad guy. The kind who are vulnerable underneath all that toughness. I remembered Sissy Spacek and Martin Sheen in Terrence Malik’s Badlands as I invented Dawson and Edie. Here they are, lost humans, unfocused and unloved until they find each other.

Then all four of them do something very bad.

Yes! Clara arouses contradictory feelings in Dawson and Edie as a mother figure, something neither of them has. So they must reject any authority figure. Dawson must prove his manhood while Edie’s need for family confuses and angers her.

The purple wasps are practically my favorite part of the book. Certainly unexpected. Clara brought a dozen wasps with her from Eugene in two big beef jerky jars. They are her pets, it seems.

Well let’s let the book speak for itself.

She catches sight of the one that always jumps higher, more excitedly than the others, the one that stung her. A purple iridescence covers its body, especially on its head. Its thorax stripes are purple and lavender, its wings shiny lavender, and its head a knockout purple shimmer. . . Glowing and royal-appearing, they invaded her dreams. Over the years, they spoke to her, sang to her, helped her flounder out of a deep, rancid pool surrounding Samantha’s death. Hold me close, they sang, whispering in her ear. And she did hold them close and hoped she was saved. . . . This wasp, so beautiful and piercing and harsh, rouses a buried part of Clara’s soul, a part that holds the harrowing truth. Sometimes she feels rising hysteria. Then she chatters, can’t think straight, and Frank gets impatient with her. Thank God he’s gone right now. She can’t stand any more scolding this morning.

What drew you to magic realism?

When there is an issue that is very deep, very emotional to me, I slip into fantasies of impossible things that uncover visually what I was thinking or feeling. For example, in an early short story, I wrote about a little girl running screaming through a big apartment house with many corridors. What was going on with her? Well, she had very long nose hairs that could catch everybody’s hurt. The nose hairs went streaming behind her as she ran. I was a male news photographer in that story. My job was to photograph horrendous accidents and file them in a special room at the county morgue. This little girl felt the pain of the world with her nose hairs. She could tune in to suffering anywhere. She was crying because of all she heard and saw. I wanted to comfort her but she kept running away from me. [Laughs] Are you going to lock me up?

I wrote The Care and Feeding of Exotic Pets about a seven-foot iguana and another about spontaneous human combustion. Exotic Pets says, “Your friend, your iguana, Cookie, needs a girlfriend. Of course he does. Everyone needs someone special to love.” Anywhere you’re going, I’m going with you, Maryl Jo.

So a few words about the ending—I know it changed a few times. Why? How?

She’s finding her way. She’s not done with this exploration by the end but she definitely working on something new for herself. And in the last pages I stepped away and looked at her and thought this is great, this is exciting. 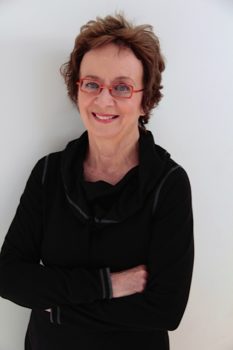 And now the personal stuff every writer wants to know: Are you working on another novel?

No. This novel has consumed me. Time for a little R and R. I have a couple of short stories that have gotten good preliminary response, so we’ll see about that.

And what is your writing process?

I write five days a week, four or five hours a day. I start around 11 a.m., because I eat breakfast and do my exercises first. I work on a computer, type so much faster than I write by hand.

I am an inductive thinker and this is tortuous. I get all my examples before I have my thesis. So I’m drowning in specifics. It’s often a pretty messy process. My head is bursting with all these examples. During my practice teaching, I was set to give a little talk on Milton’s Paradise Lost. Until I walked in the classroom door, I had no idea what I was going to say—and then the thesis suddenly popped into my head and I spoke with great eloquence, I’m sure [Smiles]. It was scary to be out hanging like that. No wonder this novel took 10 to 12 years.

How about the business of writing? Agent? Publisher?

I was trying to get an agent and had some bites, but nothing definite and I thought I really want to finish this and see it in print. So I sent a submission to She Writes Press. I had heard about this press from another writer, who used it and really liked it. Their list is curated. That is, they read all entries and rank them as 1 ( ready for publication), 2 (needs a little refresher, to 3 (not ready yet). They were very complimentary and I was thrilled they took it. I also love the cover.