"I didn’t always know that I’d potentially be tackling larger political issues with this book—that came up more organically. "

Melissa Scholes Young sits down with Jennine Capó Crucet again, this time to discuss the author's debut novel, as well as the role humor plays in fiction, finding your material, and being asked the "Where Are You From From?" question.

In Make Your Home Among Strangers (St. Martin’s Press), Jennine Capó Crucet’s debut novel, first generation college student Lizet Ramirez leaves the safety of what she’s always known, her Cuban-American family in Miami, and finds herself in a foreign land at the fictional elite liberal arts school she secretly applied to. As Lizet is packing, her parents’ divorce and her mother and sister, a single mom, are forced out of their childhood home and into an apartment miles away. On campus, Lizet feels foreign among the privileged. Through her experiences in and out of the classroom, she becomes aware of herself as a minority for the first time. Then a surprise-visit home for Thanksgiving break is interrupted by the arrival of a young boy, Ariel Hernandez, whose mother died on a raft fleeing Cuba. Lizet’s family becomes caught up in the immigration struggle for Ariel, leaving Lizet truly afloat between her new life and the pull of home.

Jennine’s short story collection, How to Leave Hialeah (University of Iowa Press, 2009), won the Iowa Short Fiction Award and the John Gardner Book Prize. Both the Miami Herald and the Latinidad List named it a Best Book of the Year. The next year, Jennine and I met at Southern Illinois University in Carbondale, Illinois. I was an MFA student and Jennine’s first book had won our Devil’s Kitchen Reading Award. We crossed paths again at AWP in D.C. in 2011 and sat down for our first FWR interview, “How to Leave and Why You Stay,” published here in August of that year.

Most recently, Jennine and I met up in the barn at the 2014 Bread Loaf Writer’s Conference and discussed this new book, as well as the many places writers travel to find their true home. She now teaches at the University of Nebraska-Lincoln.

Melissa Scholes Young: Lizet struggles with not being immigrant enough and not being American enough. In earning a place at Rawlings, she’s reaching for part of the American Dream. She’s a daughter of Cuban immigrants on scholarship to a prestigious liberal arts college. Yet her family feels her leaving is a betrayal. How does she manage the mixed messages?

Jennine Capó Crucet: Lizet expresses her frustration with the way those expectations seem to be coming from the outside, and as this is her first experience dealing with that, she’s perceiving it as a lack rather than challenging those expectations in the first place.

She goes home for Christmas break and finds that not much has changed, except her, of course. Neither Mami nor Leidy really seems to care about her semester. Why is there such an urge to “put [Lizet] back in her place”?

I don’t think Lourdes or Leidy see it that way, and I definitely don’t think they actively recognize that that’s what they are doing—but that’s how Lizet is filtering the scene for us. Leidy and Lourdes just don’t even know what to ask, which leads to a lot of discomfort that gets misread by all the characters.

The miscommunication is clear and hurtful. On her first visit home, Lizet realizes that no one has asked about college: “it wasn’t that they didn’t want to hear; it’s that they didn’t even know how to ask.” This is both generous and insightful on her part. What about her first semester has earned this wisdom?

That’s actually the hindsight set up in the early part of the novel sneaking through. Without that narrative distance, a statement like this can’t happen, and it was important for me that Lizet have some control over the interpretation of some of these moments. From a craft standpoint, that was one of the trickiest things to manage in this novel for me.

I’m glad to hear it’s painful, because it definitely feels painful when this happens to you.

In “Taking My Parents to College,” published at the end of August in the New York Times, you explain that your own parents were by your side—perhaps too much so—during your transition to college:

They walked with me to buildings I was supposed to be finding on my own. They waited outside those buildings so that we could all leave from there and go to lunch together. The five of us wandered each day through the dining hall’s doors.

When did you know you wanted to write Lizet’s story?

I knew right away that Lizet’s story was a novel. I’d been writing short stories for a long time, and I had a couple failed attempts at a novel, so when her voice came to me, I recognized the vastness of the story almost immediately, which was a huge relief.

There are parallel stories of reinvention throughout Make Your Home Among Strangers. At what point in the writing did you draft Mami’s reinvention? 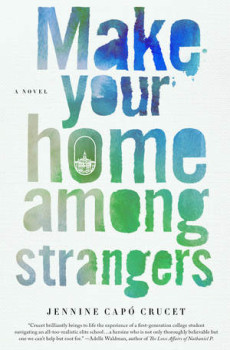 That came very early on in the process. The moment I wrote that scene where Lizet comes home for winter break and sees her mother in the airport—when she can see her mother the way other people would—that’s when I first had a sense of the trajectory Lourdes would take along with her daughter.

That trajectory means both mother and daughter have to evolve, perhaps even in different directions. Why is Ariel’s story central to this change?

It’s the whole thing—I mean, it’s the reason Lizet even has the year she has. If Ariel never shows up, these revelations never happen for Lizet: this year is the incubator, the pressure cooker. Without this event in her community, Lizet takes much longer to learn what she learns in the book, if she ever learns it at all—which she would, but you get what I mean. Without it, it’s not this novel.

Of course Ariel’s refugee story of losing his mother on a raft trying to make it to shore is the Elian Gonzalez’ story.

I didn’t always know that I’d potentially be tackling larger political issues with this book—that came up more organically. I really see the Ariel Hernandez material less as “material” and more as Lizet’s mom’s storyline, which parallel’s Lizet’s in a lot of ways.

When we chatted about your short story collection, we talked about how both of our hometowns simultaneously pull us back and strangle us a bit. What was it like debuting your novel in Miami?

It was a dream come true. It couldn’t have happened anywhere else. My eighth grade language arts teacher read about it in the paper and showed up, as did my ninth grade Algebra 2 teacher. (Seriously, aside from my mom needing to break the news of me being single again to a relative who came and hadn’t heard that particular life update from me, it was perfect—and even that moment wasn’t that bad, as my mom has some serious tact. She is awesome). The fact that Books & Books live-streamed it meant that friends all over the country could watch and celebrate with me online.

I loved watching the live-stream!

That night stands as one of the happiest of my life so far.

Be honest. Have you gotten the “Where Was I From From?” question?  What’s your favorite way to answer?

Of course I have. I hate answering it, because the subtext of it, for me, is, “Please tell me what set of preconceived ideas I might apply to you.” Once I answered it with, “Oh, I’m just Italian” and the person doing the asking seemed disappointed for some reason.

Speaking of funny answers, last year at the Bread Loaf Writer’s Conference, you taught a class on writing humor. How did you decide on that topic? 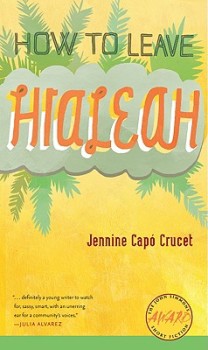 That workshop was more of an exercise in me trying to figure out my own thoughts about how humor and my comedy writing background informs my fiction. Most of the things I’m excited about teaching are actually questions I have myself that I haven’t answered or explored yet, and that was one of them. So you guys saw me sort of work through those answers in almost real-time.

Can humor accomplish something in literature that another technique can’t?

Humor in literary prose might really just be a series of syntactical moves that can be learned and practiced and refined, and that humor, in many ways, is almost necessary in a piece if you are aiming for it be taken seriously. I’m not sure I’m explaining this well, which is sort of why I wanted to teach that class to begin with: to make myself explain it better over the course of an hour or so.

Who were you reading when you were writing Make Your Home Among Strangers? What writers have influenced your work the most?

I recently moved and had to take my altar apart, but these are a few of the books I remember keeping on my desk as part of that literary shrine related to Make Your Home Among Strangers: Maxine Hong Kingston’s Woman Warrior, Jesymn Ward’s Salvage the Bones, Affliction by Russell Banks, Under the Feet of Jesus by Helena Viramontes, Curtis Sittenfeld’s Prep, Manuel Muñoz’s The Faith Healer of Olive Avenue.

I’m messing around with a new novel, and there are a couple stories in the works, too. But mostly I’m just focusing on adjusting to a totally new life in Lincoln, Nebraska, which feels right in a way that I’m learning to trust.