"Yet in the world of Abistan, logic is absurd."

"So how did Sansal pull this off?": Jenn Solheim on dystopian narrative authority in Boualem Sansal's 2084.

2084: The End of the World (Europa Editions) is only the second novel by the Algerian Boualem Sansal to be translated into English. Sansal is one of the most revered Francophone novelists living in Algeria today, a resonant fact in a country where writers and journalists in the 1990s were regularly subject to death threats, and many were, in fact, assassinated. As Robert Fisk cited the Algerian cartoonist Dilem as saying:

How do you recognise an Algerian journalist? “He’s the only guy who has a pen in his hand, two dinars in his pocket and three bullets in the head.”

Sansal is also notable as a writer who began his writing career later in life. He holds a doctorate in economics and worked for the Algerian government until he retired at age 50 to become a writer. His first novel, Le serment des barbares (1999) won the Prix du Premier Roman and the Prix Tropiques, and was made into a film based on a screenplay by the Spanish Francophone writer Jorge Semprún.

Sansal’s work often focuses on parallels between Islamic fundamentalism and other authoritarian regimes—in his early work, he focused particularly on the parallels with Nazism. I read Le serment des barbares a few years after it was published and was utterly taken with the universe Sansal had created, as well as crafty wordplay through which he articulated the problems of fundamentalist and authoritarian regimes. When 2084: La fin du monde was published in France in 2015, it was lauded as this century’s 1984—an obvious comparison, in some ways, particularly since within the universe of 2084, it’s explained that Big Brother existed in a far-off land called Angsoc and was first occupied and then eradicated by the new regime that governs Abistan. But the subjects of the kingdom of Abistan speak a language called abilang that evolved from Newspeak. On the final page of 2084, before an epilogue composed of press releases, ephemera, and news clippings, the character Toz—who maintains a secret museum dedicated to everyday twentieth-century life—explains,

When we occupied that country, our then leaders discovered that its extraordinary political system was founded not only on weapons but also on the phenomenal power of its language, Newspeak, a language that was invented in a laboratory and which had the power to crush all will and curiosity in the speaker. So as the basis of their philosophy our leaders adopted the three principles that presided over the creation of Angsoc’s political system: “War is peace,” “Freedom is slavery,” “Ignorance is strength,” and added three principles of their own: “Death is life,” “Lying is truth,” and “Logic is absurdity.” That’s Abistan for you, sheer madness.

I read 2084 (ably translated by Alison Anderson) during the week when the term “alternative facts” was coined by Counselor to the President Kellyanne Conway to describe the outright lies of Donald Trump and Press Secretary Sean Spicer. 2084 filled me with revulsion and trepidation. The kingdom of Abistan is a scarily convincing authoritarian setting. Put another way, consider what French novelist Michel Houellebecq had to say about 2084: Houellebecq’s 2015 novel Submission was published just before the attacks that killed the much of the staff of Charlie Hebdo, their bodyguards, and several people in a Jewish grocery on the outskirts of Paris. Houellebecq has been acclaimed for creating a world in Submission that portends a global takeover of the Islamic State. Of 2084, Houellebecq said, “Sansal dared to go much further than I did.” 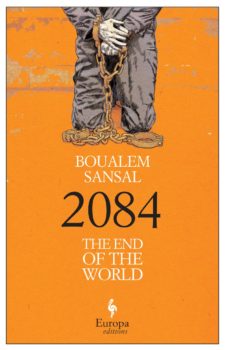 So how did Sansal pull this off? How does the narrative of 2084 draw us into and convince us of the viability of Abistan? This isn’t the first time a dystopian novel has been so deeply affecting, of course, but while Sansal establishes his novel as a companion piece or a sequel of sorts to Orwell’s classic, I would place Abistan alongside the universes of Margaret Atwood’s The Handmaid’s Tale and Cormac McCarthy’s The Road. Abistan is not only a dystopic but also a post-apocalyptic universe. In large part, 2084 is so convincing due to its combination of bureaucratic, ritualistic, and clinical terms and phrases, alongside brutal, violent details of people and place.

In the first part of the novel, protagonist Ati is in the last days of a long stay at a horrific sanatorium, where he has recovered miraculously from tuberculosis. But during his time in the sanatorium, he also became highly suspect of Abistan—of what the government claims is real and false, including the obligatory, unerring belief in and practices of the god Yolah, as conveyed by the prophet Abi, after whom the kingdom is named. And yet, most people, old and young, go to the sanatorium to suffer and die. So when Ati emerges, he is still very much a subject of Abistan, he is something of a hero as well. This gives him some measure of freedom to struggle against the regime, and it is this struggle for freedom that gives the novel its narrative arc.

Ati makes his way back to the major city of Quodasbad on government-directed caravans, which follow specified roads. The caravans are called from distant towers to pause, continue, or return to the last dispatch center. Based on these calls, a journey could be circuitous from one site to another in Abistan, and could thus drive travelers mad. Ati notices that amongst those in his caravan are “students trussed up in their school burnis, which were long black gowns that stopped a hand’s width from their ankles.” Burnis have already been established as the main form of outerwear for the subjects of Abistan. They are long, woolen cloaks, some (particularly for women) with torturous-looking headgear with flashing lights to warn others of the sort of subject under the cloak—a subject not to be trusted or approached by those without similar headgear. The name burnis is derived from the traditional Algerian burnous, an outer cloak that can be worn for warmth or ceremony; families will often pass down burnous through generations. So Sansal adapts from extant tradition for this important detail to set the scene; the way people dress would be familiar to an Algerian audience, with a nasty twist in the regulations, depersonalization, and overregulation of the burnis. 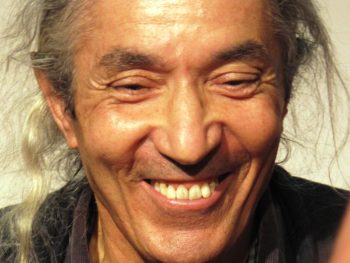 Another detail worth noting here is that the student burnis stopped a “hand’s width” from their ankles. This is another regulatory detail that feels familiar enough to be believable in two ways. First, many of us are familiar with the kinds of regulations imposed on women’s dress in fundamentalist Islamic states—those include specific length requirements from the floor to the hem, or how much of the face can show. Here, the measurement is from the individual student’s ankle, and the burnis must fall to a hand’s width above it. And that makes one wonder: whose hand measurement is it? Is it Abi, the prophet and earthly messenger of the god Yolah? The hand’s width as a detail (offered through a close third perspective) is akin to Americans and British peoples measuring in feet. We take for granted that the foot is twelve inches; we don’t necessarily learn in school that the foot as a unit is derived from the human body part. Embedding such details in 2084 is part of what makes is such a believable world. We may take the “hand’s width” detail to be an example of state control, or the arbitrary nature of the rules and regulations of the body in Abistan. Or perhaps something else altogether, depending on the association with such measurements. The point is, “hand’s width” offers careful literary detail, which opens the world of 2084 just enough for the reader to enter into it fully—in part, dependent on the reader’s own associations and imagination, which can make a place like Abistan that much more believeable and horrific.

Later, we learn that Ati is newly fearful and also suspicious of the world around him, because while in the sanatorium,

he had crossed a red line: he had been guilty of non-belief, a crime of thought… he had a presentiment that some day this madness would rise to the surface and cause untold misfortune. In reality, even simple hesitation is dangerous; one must walk straight ahead and keep on the right side of his shadow without ever arousing suspicion, because then nothing can stop the machine of inquisition…

What Ati once performed so naturally now cost him heavily, and the condition was worsening. He no longer knew how to say ‘Yölah is just,’ or ‘Hail to Yölah and to Abi his delegate’ and seem sincere…

This passage does so much to show us the effect that abilang has on the people of Abistan. While one might think that somehow it was discovered that Ati was having a crisis of faith in the sanatorium—the “non-belief”—as we continue reading, it becomes clear that Ati himself has realized he is guilty of non-belief. But that is almost more horrific in this world than being discovered, or found guilty of such a crime, for then one begins to doubt one’s ability to pray “sincerely”—and the subjects of Abistan are obliged to kneel in prayer nine times a day. His “guilt” is also a “condition”—not a legal conviction, but a sort of malady of the soul—and yet there is nowhere Ati can articulate his crisis, and thus it must, and can only, fester inside him. Later in the novel, Ati blames this crisis for a foolhardy moment that leads to a tragedy that sets the rest of the plot in motion. Thus from the subtle establishment of setting arises both character and plot.

At the opening of 2084, Sansal offers a warning:

Falsehoods are not lies—at least, not if we follow the precepts of logic. One can tell a falsehood without lying, for lies must necessarily be meant to deceive. Yet in the world of Abistan, logic is absurd. So where does this leave us with falsehood? It’s akin to the idea of an “alternative fact”: the adjective alternative, left unmodified, suggests legitimacy. And if everything is sheer falsehood, then how can we believe Sansal’s warning?

And so we enter this novel with questions, ringing eerily true to the political world into which Americans have been thrust in 2016. Is this a work of pure invention? Does this world indeed not exist?

The Confession of Copeland Cane, by Keenan Norris