Two thousand years ago, a poet and mercenary named Archilochos wrote down the first known Greek beast fable, a story featuring anthropomorphized animals, and since that time western civilization has retained a sentimental spot for critters—see: Æsop and Chaucer. Many of these fables featured stories from a didactic viewpoint, as in Uncle Remus’s Br’er Rabbit tales or in the medieval beast-epics about Reynard the Fox, but in the late twentieth century, that began to change, as Richard Adams’s Watership Down and then Brian Jacques’s Redwall brought a more realistic treatment to the genre. Today, given the popularity of talking animals in Hollywood, and considering the literary world’s premium on originality, it was only a matter of time before someone ambitious published a novel that crossbred Blood Meridian with Rango.

Howard L. Anderson’s debut novel, Albert of Adelaide, follows the adventures of its eponymous hero, a duck-billed platypus, as he sets off across the desert in search of Old Australia. Like the brooding protagonist of a John Wayne movie, he has suffered a traumatic early life, although he hides the scars from the animals he meets during his journey. That trauma—the murder of a loved one and long captivity in a sterile zoo—fills Albert with longing for a world he’s only heard about in legends. When he finally comes to the desert, known in the book as Hell, he’s already begun to develop the “taste for mindless violence” Cormac McCarthy has plumbed so deeply.

Albert begins as a peaceful traveler, with no interest in the darker aspects of life in the wild. But that changes when he incurs the wrath of a scheming wallaby and a psychotic opossum. Part of the novel’s suspense comes from wondering whether Albert will transcend this new version of himself, Albert the Killer, or be consumed by the howling storm he has accidentally unleashed on his friends and enemies alike. At times, the novel reads like a children’s book because Anderson doesn’t wallow around in lapidary prose. The descriptions are simple, if detailed, and the dialogue is expository, if clever, as when a Tasmanian devil tells Albert, “I’m the only devil in Hell, and you’re the only platypus.” Except for the scenes of violence—including a dingo getting his throat cut, a village of women and pups massacred by marsupials, and a bandicoot eaten alive and disemboweled—you’d almost think you were reading a young adult novel. Scratch that, violent ends in children’s literature are as old as the brothers Grimm. Really, the book has the same weird combination of joy and grit found in All Dogs Go to Heaven, where the characters are smoking, drinking, gambling, and killing one another, but also doing musical numbers and learning how to be selfless.

In short, there’s nothing quite like Albert of Adelaide, which draws inspiration from eclectic sources (its final pages echo El Sordo’s last stand in For Whom the Bell Tolls) and also from the unique mind of its creator. According to the “About the Author” section, Anderson has lived an extremely varied life: he’s been an Alaskan fisherman, a Pittsburgh steel mill worker, a member of a helicopter battalion in Vietnam, and a defense attorney in New Mexico for “Mexican nationals charged with crimes north of the border.”

One wonders about Anderson’s exclusion of women-animal characters, simply because it’s so complete (at one point, as he approaches a town, Albert even sees a sign where “someone had taken a paintbrush and crossed out the word FEMALES with a couple of rough strokes”). Another curiosity: the novel’s handling of time. Summary narration often picks up at odd instances from chapter to chapter, with momentous events occurring off-stage, then related through flashback. However, these strange choices add something to the book’s overall charm, and end up being just more eccentricities on top of the pile. Throughout the novel, Anderson chooses to write about the tension between animals-as-animals and animals-as-people, and he punctuates his mythic settings with descriptions that might have been clipped from Zoobooks. Here, for example, we learn that male platypuses have venomous spurs on their hind limbs, and that the plural of platypus is “platypuses” and not “platypi.” Again, these descriptions become part of the novel’s attraction, and, as a reader wonders about Albert’s fate, he or she also learns how platypuses hunt, swim, and live around billabongs. “A platypus is an animal that lives in or near water all its life and can’t survive without it,” Anderson imparts during the opening pages.

In the end, Albert of Adelaide is funny, touching, and entertaining. Most of all, though, it’s unique. Howard L. Anderson’s gun-slinging platypus is a whimsical addition to the tradition of beast epics, and, in an industry sometimes enamored of clichés, Albert of Adelaide is one of the most imaginative books published in years. 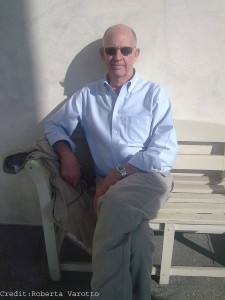