Fiercely protective of his writing time, Joshua Cohen (Four New Messages) makes no apologies for keeping his interview answers pithy: "The book is the oil painting above the grand piano of the future. Certain households have them. We/they know who they are." 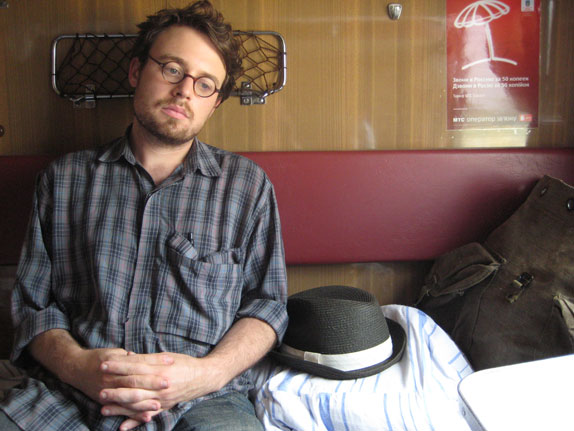 During my final semester of MFA coursework, a visiting writer, Joshua Cohen, came to town from New York. He wore circular glasses, talked fast and smart, and had read everything ever written. Or at least that’s how it seemed to us. Dalkey Archive had just released Witz, his 817-page novel, and Dzanc Books had just reprinted another of his novels, A Heaven of Others. One of his stories, “Emission,” had just come out in the Paris Review. As part of his visiting writer contract, he taught three classes, and a few of us enrolled in them all: Professional Nonfiction Writing, Fiction Workshop III, and Justifications, a class about novel forms. He had never taught before. No one knew what to expect. As for the coursework itself, though, we agreed that we had never worked so hard or learned so much. And then one night, in our Justifications class, he indulged us by reading an entire story out loud: “McDonald’s,” a story about a tortured writer who can’t bring himself to type the name of the eponymous restaurant chain (even though finishing his story depends on this detail). That piece—along with “Emission” and two others—now appears in his new book, Four New Messages (Graywolf Press).

Almost a year after he returned home from the Midwest, I caught up with Cohen to discuss influences (including music), form, and the distractions of the internet, as well as his newest book and favorite joke. Cohen puts a high premium on his writing time: he makes no apologies for keeping his runic answers pithy and has yet to give a long-winded interview. Fans of his writing will no doubt be grateful for that discipline. 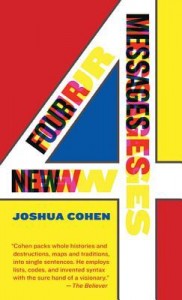 BEN PFEIFFER: The novella seemed like a lost form for a while, but now it seems to be gaining popularity again. Can you talk about the form in general, and what made you want to write something longer than a short story but shorter than a novel?

JOSHUA COHEN: The novella form was never lost. Since the magazines, in their midcentury heyday, called stories “stories,” novellas, if they lost anything, lost market viability. The European, specifically German, definition, which is something like an extended prose narrative with a single concern—single character, single event, etc.—seems to me the best.

In your past books—including A Heaven of Others, Cadenza for Schneidermann Violin Concerto, and Witz—you’ve played with language on a structural level. Four New Messages exhibits some of that same form-based play. How do you think about form when you’re sitting down to begin a new project?

I plan, destroy the plans, replan, come to compromise, lie down.

I don’t play favorites, I play ideals, which change with what I’m working on. Lately I’ve been rereading Canetti, which, I realize, is a perfect, though perhaps too convenient, answer to your question: Everything he wrote was, explicitly or implicitly, both fiction and not.

You once told me that divine intervention and genetic aptitude had nothing to do with what makes someone a writer. Becoming a writer is more about influence: knowing what’s been written before and how you as a writer connect to those books and stories and essays. Can you talk about your own influences? What advice would you give to aspiring writers about how to find their place in that tradition?

If you pay enough attention to yourself to be able to identify your influences, you’re fucked. That’s my answer to both questions.

In “Emission,” you write in part about a woman who keeps and updates many, many blogs. In “McDonald’s,” you write about a troubled author who spends “Midwestern quantities of time on the internet” and can’t stop “searching search engines for ‘whats wrong with my story?’” Can you talk about your take on the internet, social networks, and our new holistic society?

So if you maintained twenty different blogs, what would you write about? I’m presupposing that you don’t already do this.

Trust the presupposition. But if the choice were to blog or die, I’d start a site publishing the daily whereabouts of the heads of, say, the ten largest banks. Whatever anyone would do with that information would be up to them. Disclaimer! 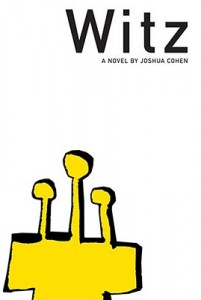 While we’re on the subject, what do you think about Kindles, Nooks, or the push toward computer-based literacy—iPads for schoolchildren, that type of thing?

Don’t use them. Further proof that if a product exists, so too does its consumer. Desires as coextensive as the future…

Without taking sides, just looking at it objectively—I mean, I’m not asking you to incur the wrath of Twitter or anything by calling it vapid—what do you think about the future of printed materials? Does it even matter how we read anymore?

The book is the oil painting above the grand piano of the future. Certain households have them. We/they know who they are.

You had experience as a musician before you were a writer. How is music similar to writing for you, and how is it different?

In prose, the comma is the breath. Music has helped me remember that.

Your fiction has a lot in common with spoken language—for example, just now, you saying “the comma is the breath.” Can you talk about the oral storytelling tradition for a minute?

The oral/aural has been usurped by the visual/manual. The last communal fire is the screen. Reverse Cowgirl the new Hopi Snake Dance. But we’re still talking, aren’t we?

A novel. A nonfiction book about “attention,” due out next year. Essays for rent. They’re better than anything I’ve done before. Now I can die. Finally!

What country are you in now, and what are you doing there?

The country of Germany. Just back from Serbia and Bosnia-Herzegovina. I’m making new friends and having new experiences (researching a book).

Favoritism is not my religion. But I do enjoy sending emails that rehash that old telegram joke. No body text, just subject: “Start Worrying. Details to follow.”

My story is pretty simple:

About two years after being graduated from college with a degree in unemployment—my thesis was on Metaphor—I’d moved from New York to Berlin to work as a writer, though perhaps that’s not right because nobody in Berlin works. I’m not going to get into why that is here. This isn’t history, isn’t an episode on the History Channel.

Take a pen, write this on a paper scrap, then when you’re near a computer, search:

Alternately, you could just keep clicking your finger on that address until this very page wears out—until you’ve wiped the ink away and accessed nothing.

From “McDonald’s” – A man tries to explain writer’s block—and a story he’s stuck writing—to his father:

So I described things, I made things up and described them to my Dad: light and signs and the throats of boyfriends, frisking my face in my sleep with a thumbnail that left wounds, smoking quit cigarettes and drinking nightly a half bottle gluglug of whiskey, waking up late so getting to work late where I’d spend Midwestern quantities of time on the internet pursuing this one particular commenter I thought common to a spate of local sports blogs but under twelve different, differently gendered aliases and product recall news especially when it concerned the domestic automotive industry and searching search engines for “whats wrong with my story?” coming back from work still worrying the story and hating the story and thinking that introducing this Word into the story would be like introducing Mom who really wants grandchildren to a girlfriend who’s really a man, it’d be like inviting friends over to my apartment for dinner then serving them individual portions of my feces garnished with poems about how much I hate friends and the poetry would rhyme.

It’d be wrong to bring this Word into my story and so into my life, not interesting in the way that foreigners tend to enliven a host country with their cuisine and dress, religiosociocultural traditions and languages, but in fact evil and destructive, The boyfriend’s foreign? Dad asked, I’m trying to tell you the story by not telling you the story, I said, you should be aware that this is what writers regularly do, This is America? Dad asked—To recap, I said, he’s driving because her corpse is in the backseat and her corpse is in the backseat because he killed her.