Love, darkness and the long shadows of myth haunt the American Southwest in Battleborn, a debut collection from Claire Vaye Watkins. 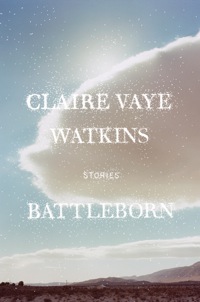 Choosing the perfect epigraph—not to be confused with an epitaph, epigram, or epithet—is an art. Chosen poorly, an epigraph can confuse, annoy, or distract the reader; done well, though, the quote or poem that opens a book can dazzle, surprise, or bring cohesion to an eclectic work. Fiction is nothing if not a series of choices, this character not that, this situation not that, and, like syntax and diction, a well-chosen epigraph separates professional writers from pretenders. And, in her debut collection, Battleborn (Press 53), Claire Vaye Watkins has chosen the perfect epigraph to tie her stories about the American Southwest together:

In the desert
I saw a creature, naked, bestial,
Who, squatting upon the ground,
Held his heart in his hands,
And ate of it.
I said, “Is it good, friend?”
“It is bitter—bitter, he answered;
“But I like it
Because it is bitter,
And because it is my heart.”

The ten stories that follow adhere themselves to Crane’s odd, fable-like verse, despite using different styles and characters to set the tone. Whether the narrator is a young woman  (“Ghosts, Cowboys”) or the voice of, say, a sixty-year-old man (“Man-O-War”), Watkins never allows her writing to lose its edge. The sentences are always crisp; the setting is unerringly vivid; the action is perfectly continuous. Watkins writes about people with compassion, simultaneously celebrating and questioning the mythologies tangled in our ideas of the American West. In “Ghosts, Cowboys,” she mixes history with popular culture, detailing the history of Reno, Nevada, while weaving in the old movie set where The Lone Ranger was filmed. Her juxtaposition subtly shows how the actual history of the West became conflated almost immediately with the Hollywood version, the “thoroughfare of a Western boomtown: bank, saloon, wood-planked boardwalk, side streets and alleys, a jail.”

Moving forward through time, readers arrive at the epitome of fakery—Las Vegas—featured in “Rondine al Nido” and “The Past Perfect, The Past Continuous, The Simple Past.” But no matter how seedy the place or the people, Watkins manages to detail lives and events with empathy. Method and patience drive the writing; action unfolds without machination, no forced hands here. Despite desperation and abuse, Watkins’s men and women never seem like victims. They are never entirely powerless. Each character makes choices, lives with the consequences, and the lucky ones choose again. Not every story has a happy ending. The collection retains a comprehensive darkness, as if Crane’s haunting lament (as delivered by a bitter-heart-eating creature) casts its shadow over every line. Yet the stories contain hope, and an unsentimental love, too. The result is a complete emotional experience more overpowering than its parts. This combination of accomplished writing and emotional acuity hints that Battleborn itself might serve as an epigraph to a long and accomplished career for Claire Vaye Watkins.