In her debut novel, Asta in the Wings (Tin House, 2009), Jan Elizabeth Watson captures the peculiar insightfulness of childhood through her seven-year-old narrator, Asta. Forbidden - ever - to leave the house and left alone during the day, Asta and her brother, Orion, fear a plague that their troubled mother has convinced them lurks outside their locked door and tar-papered windows. As Orion recounts: “The plague started some years ago … in a faraway land … not long after our father died from walking straight into the ocean.” These dark allusions underpin the children’s day as it unfolds in whimsical games amid stark circumstance. Yet when the children are forced to enter the outside world, we become even more fearful for their safety. 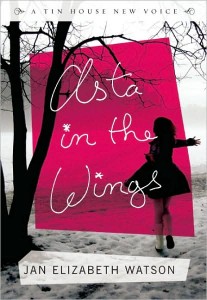 Adults often glorify childhood, even while forgetting how knowing children can be. Jan Elizabeth Watson’s debut novel, Asta in the Wings (Tin House, 2009), captures the peculiar insightfulness of childhood through her fearless seven-year-old narrator, Asta. To say that the book is pitch perfect doesn’t begin to capture the gorgeous ways Watson reveals the predicament of Asta and her nine-year-old brother, Orion: their magical, theatrical mother, Loretta, has serious problems that endanger her children. Orion in particular is quite sick. But for Asta and her brother, Mother’s impulsive haircuts and manic outbursts simply exist in the overall chaos of life.

Left alone during the day in the house they are forbidden – ever – to leave, the children fear a plague that their mother has convinced them lurks outside their locked door and tar-papered windows. As Orion recounts to Asta: “The plague started some years ago … in a faraway land … not long after our father died from walking straight into the ocean.” These dark allusions underpin the children’s day as it unfolds in whimsical games amid stark circumstance. Beneath each sibling’s total reliance on the other lies the most rare form of love, the unconditional kind.

Asta’s voice enlivens the story with candor, acceptance and humor. Her heightened intelligence feels completely plausible. Watson toes this line carefully, and never forgets that Asta is, after all, a little girl of seven. Asta also tells the story at some remove, and though it doesn’t feel like much of a temporal distance from when she begins the story, she’s still recounting “the day before everything changed,” so one knows what’s in the offing. Take this as an example of her sound:

Mother once told me, when I was too young to appreciate it, that it is only through others’ perspectives that we come to understand who we are. Or, to put things her way: “Not until we’re shaped by others do we end up resembling something that looks like ourselves.” But I’d like to think Orion and I were born fully formed – Athena and Apollo, sprung from the head of Zeus – and we resembled not ourselves so such as each other. That was the way I wanted it. That is the way I like to think of it still.

Lyrical diction runs in the family. Loretta’s aspirations toward theatre (her mother was an actress) have yielded a keen knowledge of silent film stars for her children and an overall grandness to even the simplest gestures, like lying on the floor to watch television in a nest arranged as for a queen. Even Asta’s smallest remarks tend to have sweeping implications. Watson achieves in a few words what would be far less effective approached directly: “Can you tell me more about the winter?” Asta asks her brother “I like to hear about the different seasons.” With those eight words, one remembers that Asta has never seen the seasons herself.

The children do not remain in captivity; the second half of Asta in the Wings takes place in the outside world. And once outside, the reader becomes even more fearful for their safety than the frightened children know to be. As they wonder if they can trust a bus driver, so does the reader. The world can be cruel, unpredictable, but Watson continually reminds us that chance or fate is blind, and the good outcome exists alongside the horrible. Not every dark corner of the forest hides a wolf. This book, not unlike Miriam Toews’ The Flying Troutmans, reveals the flip-side of an idyllic childhood. When children face a single parent with a mental illness, disaster can result.

But Watson’s novel argues that resilience–and human kindness–are equally strong forces at work. In the outside world, Asta still misses the magic of her former life, the dark fairytale quality of their home together. She surprises her mother by recalling the fantastical creatures from the Book of Revelation that Loretta described as truth.

“How did you remember all that? Do you like thinking about the pigs and cows and horses going free? And the beasts with six wings?”

“Then you should hold on to those thoughts. Hold on to what gives you comfort.”

Asta in the Wings treats comfort as a blessing beyond price, one to be seized upon and celebrated in every form. The commonplace can be just as bewitching as the transcendent. For two children who have not been outside in more than five years, snow is a miracle. Asta fully realizes this mystery:

Mother had always said that our earthly experiences didn’t matter, for our real treasures would be found in heaven, but I liked the treasures I had here on earth, small though they may have been, and did not want to part with them before I absolutely had to.

Watson makes it difficult to part with Asta, and impossible to forget her. 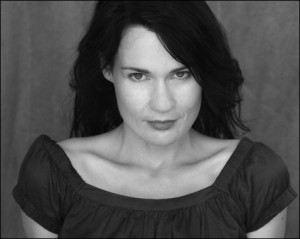 – Interviews with Jan Elizabeth Watson are available on Book Browse and Meeting House. And here is her novel’s playlist at Largehearted Boy.

– Read the first chapter of Asta in the Wings on Tin House‘s website.

– Pick up a copy of Watson’s debut novel at your local independent bookstore.