Elanor Dymott’s debut novel, Every Contact Leaves A Trace, presents itself as both love story and mystery. Told retrospectively months from the action of the novel, a man relates the series of events that led to his wife’s murder — a story that, in his process of uncovering, reveals the image of a woman he clearly never really knew. 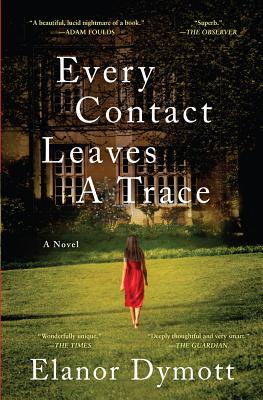 Elanor Dymott’s debut novel, Every Contact Leaves A Trace (W. W. Norton), presents itself as both love story and mystery. Told retrospectively months from the action of the novel, Alex relates the series of events that led to his wife’s murder. In detailing Rachel’s death, Dymott introduces the reader to the love of Alex’s life—a woman he loved for many years before a chance encounter brought them back together.

The novel weaves the present-day narrative of Alex searching, through friends and acquaintances, for an understanding of what led to that fateful day of Rachel’s death with the story of Rachel and Alex’s separate lives as university students at Oxford University in the 1990s. As the story progresses, however, it becomes clear that what Alex didn’t know about his wife will become key to uncovering her murder. And in the process an increasingly unflattering portrait of Rachel (a blackmailer, a schemer, a sexual temptress) emerges, with each new story of his wife’s past worse than the last, eventually revealing the image of a woman who Alex clearly never really knew.

Yet despite all that Alex learns from his personal investigation into his wife’s murder, he still loves her unconditionally. Recounting a moment from their past that in light of her newly exposed self now resonates with even deeper meaning, he says:

I told her I saw things differently from her, and that it was my belief that one could never really know another person anyway, not completely. I said I was fairly certain I was capable of loving someone without question, and that was what I understood to be the meaning of unconditional love.

Few examples better capture Alex’s character than this one, both in terms of his unflagging devotion to Rachel and his deep-seated need to believe that they connected deeply, despite her deceptions. Later, he says:

When Harry told me about the conversation he and Rachel had had that day on the riverbank, I knew then that whatever else I might come to discover about her didn’t matter, and that none of the things I’d learned so far mattered either. I was sure that she had loved me, and I had come to a better understanding of the ways in which she’d done so.

Insofar as charting the bounds of love, and of illuminating the ways in which love both tests and defines us, Dymott has created a compelling story. One that probes the question of how separate and private the lives of the people we think we know best might be, and how our understanding of them and our shared past changes (or not) when this is revealed.

However, the book’s promise of also being a mystery fails to fully develop. Partly this has to do with the fact that Alex is telling the story from a removed period of time. He has processed the information, he has come to his conclusions, and he has made decisions prior to recounting the tale for us. This remove eliminates a sense of suspense for the reader, who—in a narrative with more present action—would have the opportunity to experience the discovery of the various truths about Rachel and her relationship with Alex right alongside the narrator. But he is already half out the door, literally packing, as he is telling us the tale:

I miss her. That’s the long and short of it. I missed her before I took my trip to Oxford to visit Harry, and I missed her on my return, and this week or so since I’ve been back, trying to work out what to do with myself, I have felt her absence more keenly still. And it is because I can’t be with her that I’ve decided to leave London, and start again elsewhere.

This is not to say that a story—particularly a mystery story—can’t be told retrospectively. But choosing to portray Alex as such a passive narrator eliminates the sort of tension that makes a reader invest in a book’s outcome. And, more importantly, that engages a reader by inviting them to participate in the process of discovery. Instead of actively investigating his wife’s murder or challenging the police at every step, say, Alex is mostly sitting in a faculty dorm room listening to Harry tell the story he believes explains why Rachel died and by whose hand. Yet even here we aren’t hearing the story with Alex in the present—Alex is instead telling us the story of Harry telling him the story after the fact.

This narrative strategy has the potential to produce some interesting tensions. Through the “version of events” that Harry explains, in painstaking detail, dating all the way back to freshmen year of university, it quickly becomes clear that not one character in the novel is who they appear to be and that no one, least of all Rachel, as Alex knows her, is to be trusted. And so a careful reader might guess that the same could be possibly thought of Alex. Maybe his “version of events” that he retranslates and tells us is also skewed in its own way. Yet Alex seems to lack this complexity. Of all the characters that Dymott builds, he remains the least developed—grief hides him. It also nearly entirely defines him. And, as such, he feels more a device—a conduit—for the tale to be told than a real player in the narrative, removing the story’s immediacy and somewhat dampening the suspense.

Though by the end of the novel what readers will come to understand is that the suspenseful telling of a good mystery might not be Dymott’s primary concern; she seems more interested in examining the effects of the life choices we make, in how they affect other people, and of the consequences they might bring. A maze of backstory and forward motion, Every Contact Leaves A Trace leaves the reader with the knowledge of the likely murderers by its end. It inspires a deeper look into the nature of love, and it wonders whether we can ever know someone completely. But the novel fails to deliver the suspenseful story of the murder case that it pretends is at the heart of the narrative.