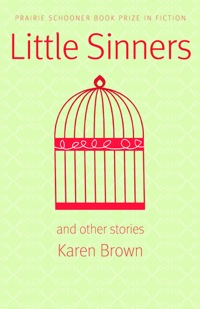 Karen Brown’s sophomore collection may be called Little Sinners and Other Stories (University of Nebraska Press) but from the first page it’s quite clear that there is nothing little about the sins any of her characters commit.

All the characters live in upscale Connecticut towns. They have big houses, money, and all the stereotypical unhappiness that comes with that life. They are discontented, full of ennui. It would be easy for Brown to drop these characters into cliché, but instead, she finds the moments, the memories, that make each protagonist more than what she appears on the page.

The titular story invites the reader into the town, through the reminiscent eyes of a woman reflecting on her own cruelty as a teen.  Written as a one-sided conversation to the girl they teased—who has just passed away—the narrator has lived to know better the consequences of her actions. Unlike the rest of the protagonists in the collection, this narrator no longer lives in the town; but her memories of it then introduce the story of how it is now.

We are all alone with the stories we have never told, and even now, given your death, there is no real forgiveness. Just this acknowledgement, whatever it is worth, of all the little deaths that came before it. Several poignant stories in the collection draw the reader inside the town and the lives of these characters. “Mistresses” details the town’s dark underbelly, the seedy and tawdry. Brown writes, “neither Laurie nor Ivy had been pregnant yet”— a quick and effective shorthand for their situation.  “The Philter” offers a voyeur’s view of a lonely girl’s need for a friend, even as her family lives in denial about her mother’s whereabouts. In “Stillborn” a pregnant woman begins to unravel the details of an elderly resident’s possible victimization after she finds the bones of a stillborn in her garden.

Near the end of the collection, “Leaf House” renders a love gone stale, or perhaps never in existence at all. Martha had been drawn to Michael at age 16, and never let go of the idea of him.

And because he never approached her, she never forgot him, kept imagining the idea of being with him on still summer evenings with her face pressed against the pillow, and the neighborhood sounds coming through her open window — boys out on front lawns playing lacrosse, husbands and wives walking dogs — or during the bus rides to public high school, the town passing beyond the dirty bus window, knowing that one day she would have her chance.

She “believed she could have whatever she wanted” and so she waited and planned and found her way into Michael’s car on perhaps the most vulnerable night of her life, the night after her father died. Their odd attraction to each other is enough to lead to a relationship, marriage, and two children, but Martha must face that Michael does not love her, or maybe she does not love him. Martha’s full commitment to her doubts about Michael drives the story on like a whip. The reader wonders not only about Martha and Michael, but her own relationships and destiny. Brown‘s words paint a picture of a woman who has accepted her fate, to remain with a man she does not love simply because she chose him years before.

Michael was still the boy in the silver MG, his eyes the same, with the same lost look, and she would still give him anything, but somehow he could not remember what it was he ever wanted from her.

Pages and stories of sins and betrayals later, you leave feeling tired, desperate, even a little dirty, but also rejuvenated. The final story “Housewifery” concerns the end of summer and the disillusionment of the coming fall. But within the sadness Karen Brown describes, hope still burns in the ever-changing seasons. Summer will return with the magic of sunlight and warm weather to lend a rose-colored hue to the sins committed behind the closed doors in this—and perhaps your own—small town.