"With both heart and wit in spades, and a few bold surprises up its sleeve, Forest of Fortune is a literary jackpot."

Forest of Fortune, by Jim Ruland

"In Forest of Fortune, Ruland combines the tropes of hardboiled crime fiction with the creepy appeal of a ghost story, and riffs on elements from addiction/recovery narratives."

Welcome to the Thunderclap Casino, a run-down gambling den built on an Indian Reservation along Southern California’s eastern fringe. Jim Ruland’s strange and wonderful debut novel, just released by Tyrus Books, follows three separate characters around the Thunderclap, all of them desperate for a lucky break.

Born and raised in San Diego, Lupita married a boy from her neighborhood, and followed him from base to base after he enlisted in the air force. Once he dies overseas, Lupita collects the insurance check, relocates to Falls City—the tiny town that surrounds the Thunderclap casino—and finds her calling as a full-time gambler. She has no trouble spending hours staring at the spinning slots, usually seated next to her older colleague Denise. Lupita tends to reject the mathematical methods of Denise and others, preferring to judge the machines good or evil and play accordingly. 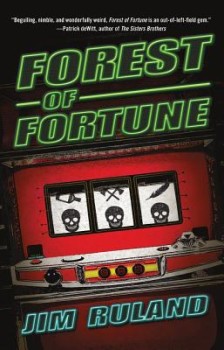 Pemberton is a low-rolling copywriter from LA with a weakness for booze and cocaine. After his fiancée throws him out, he follows a want ad all the way up Thunderclap Mountain—not quite intending to stay, but hoping to scam a modest relocation check out of the hiring process. After a close call with the drug test, he finds himself working on the casino’s promotional campaigns. His supervisor—a salty veteran from the cutthroat world of Las Vegas casino marketing—scrutinizes his every move. A hard-living ad writer with a low ceiling for success, Pemberton is something of an anti-Mad Men character: while he shares Don Draper’s capacity for downward spirals, Pemberton has precious few redemptive moments along the way.

Alice is a casino employee with severe epilepsy. She’s Native American, but not part of the tribe that owns the casino—and thereby something of a perpetual outsider. Her seizures increase in size and frequency, and start to affect her work; the medications and their side effects only make things worse. During one bad episode, Alice has a vision of a ghostly woman hovering a few feet above the ground—possibly a hallucination, possibly a supernatural peek into the Reservation’s dark history.

In Forest of Fortune, Ruland combines the tropes of hardboiled crime fiction with the creepy appeal of a ghost story, and riffs on elements from addiction/recovery narratives. What results is an absolutely unique novel: smart, funny, and masterful in its characterization. From genre work, it borrows a lurking brand of suspense—a feeling that something awful might occur at any moment, at the hands of even the most mundane character. Yet Ruland’s book never loses sight of its literary sensibilities, either, making sure that character development and what’s at stake for each individual are squarely front and center. Similarly, the place is more than just a background for the novel’s plot. In fact, the way in which the characters see this place and how the place reflects them in return is an important concern of this novel, as well as another avenue to leverage the genre elements.

It is through Alice’s eyes that we often see the casino and its clientele in the least flattering light:

The graveyard crowd was different. They were younger and rougher looking. Shit-kickers, tweakers, out-of-work workingmen. People with no place to go. The kind of people you saw standing outside convenience stores in the middle of the night. Men who looked like they were on the losing side of the battle of life but would be happy to take on the next challenger. The women were even scarier. Whether it was the sun, cigarettes, chemicals, or a combination of all three, all that hard living took a toll on their femininity. Their strength had been sapped, their softness planed away.

Things head downhill for the three main characters. A drug-dealing Native American rap-metal band called Red Dawn manages to bring drama into everyone’s lives. Pemberton stumbles across an old drinking buddy, doubles down on his bad habits, and throws away any chance of reconciliation with his fiancée. When Lupita’s not in front of the slot machines, she struggles to maintain some semblance of a relationship with her family back in San Diego. Once she finally does win big, trouble follows fast on the heels of her fortune. And Alice moves lower and lower down the casino’s employment ladder, in search of a job she can hold without incident, and even tries out a relationship with Mike from security. Her doctor pries into her past, and she’s forced to confront the traumatic details of her childhood. As the narrator puts it:

She was a fool for thinking she could ever be well, for fucking around with Mike and flirting with Dr. Marcus and fighting with Lil’ Smokey, for hanging all her hopes for a better future on a man, and now she was going to lose it. Right here at Thunderclap Casino with all these addicts, imbeciles, and thrift-store bimbos watching, egging her on, she was going to completely lose her shit.

At the bottom of a trashcan, Alice finally catches a glimpse of the ghost that’s been lurking in the corners of her eyes. Just as the stakes for each character reach dangerous heights, a massive blaze rolls in from the eastern hills and threatens to burn the Thunderclap to the ground. In their final act, our three unlikely heroes must take their chances with salvation by fire, salvation from fire, or no salvation at all.

In all their faults, the three principles are rendered with a rare mix of dark humor and compassion, a testament to Ruland’s skillful prose. A Navy veteran and former casino employee, the writing in this novel has an effortless grit and authenticity. Through both Pemberton’s alcoholism and Lupita’s gambling problem, we experience the dull grind of full-time addiction as the heavy burden that it is. And though she has a different set of afflictions, Alice shows us that sobriety isn’t much easier. With both heart and wit in spades, and a few bold surprises up its sleeve, Forest of Fortune is a literary jackpot.