"So here, in his creative and affectionate treatment of both Larkin and Hull, the author reminds us to look more deeply": Ellen Prentiss Campbell on Jonathan Tulloch's new novel, Larkinland, out this month from Seren Books.

Poet Philip Larkin said, “I believe that art which takes its origin in other art is less likely to be successful than art found in unsorted experience.” I imagine him archly amused and secretly pleased to be wrong in regards to Larkinland (Seren Books), a novel that succeeds brilliantly at the unlikely task of imagining and fictionalizing Larkin’s bifurcated life as academic librarian and poet in the North East England city of Hull.

Larkin might also derive ironic pleasure from author Jonathan Tulloch’s inspiration for this novel. A reporter and essayist as well as novelist, he was sent on assignment in 2012 to Hull, the poet’s home for thirty years, for the unveiling of the Larkin memorial bench (an event ripe for the deprecatory self-parody Tulloch’s protagonist, Larkin doppelgänger Arthur Merryweather, often deploys). What happy serendipity for readers that the commemorative bench sparked Tulloch’s imagination and yielded this witty and appreciative interpretation of Larkin and his relationship to Hull. Throughout, Tulloch explores two linked premises: Larkin does not deserve the “public perception of him as a hardened, miserable so-and-so” and Hull, seen through Larkin’s poetry, is “Wordsworthian” rather than bleak. Tulloch investigates both the poet and the city’s complexities and contradictions. As the cliché avers, we can’t judge a book by its cover—nor, Tulloch demonstrates, an author or his city by superficial appearance and popular reputation. But we make such judgments, however much each of us resents and resists oversimplification of who we are and where we come from. So here, in his creative and affectionate treatment of both Larkin and Hull, the author reminds us to look more deeply. 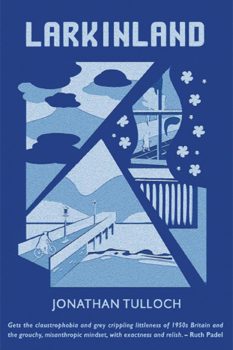 The emphasis on keen observation is not surprising as Tulloch is also a nature writer. And while I had not read his fiction prior to Larkland (his seventh novel), I was familiar with his writing from his column “Glimpses of Eden,” which appears in the British journal The Tablet. Learning he’d written this novel piqued my curiosity, however—not because I’d ever read much Larkin, but as a huge fan of novelist Barbara Pym. Her letters to Larkin are among those collected in A Very Private Eye: An Autobiography in Diaries and Letters. Larkin and Pym were devoted correspondents, an epistolary friendship tinged with competition. Pym envied his earlier and more sustained acclaim; he originally aspired to be a novelist and regretted his relative lack of success in her genre. (I’ve just tried to read his first novel, Jill, published in1976, and put it aside). So enticed—neither familiar with Larkin’s poetry, nor Hull, nor Tulloch’s fiction—I began to read Larkinland. What a lark! Forgive me, Tulloch’s wordplay is contagious.

The novel is neither fictionalized biography nor didactic homage. Tulloch takes off (in all senses of the phrase) from the facts of Larkin’s life and the spirit of his poetry to create imagined failed novelist and aspiring poet, Arthur Merryweather. Recently arrived in Hull to assume the position of Director of the university library, he’s adjusting to the pervasive smell of fish in the harbor town, settling into his architectural gem of an office, lusting after his beautiful young assistant, fending off his libidinous landlady, and becoming embroiled in a mystery involving book theft, embezzlement, and romantic betrayal. Merryweather is prickly and endearing— Prufrockian; an Inspector Morse with Asbergers; a mid-twentieth century, very British, Don Quixote; a bundle of contradictory yearnings and ambitions.

Merryweather pines after his assistant, but his more reliable, requited love is for words and literature. Larkinland is a reader and a writer’s book, replete with implicit and explicit references to authors from Arnold Bennett to Thomas Hardy. The poet-librarian sees his situation with humor and regret, and describes the increasing complications of his life in Hull in vivid simile and metaphor, laced with sarcasm, profanity, and lyricism. Here, for example, he reflects on his plight with the alluring assistant librarian:

Being with her was like playing postman’s knock with Rosalind in the forest of fucking Arden. What poetry could be written about a girl like that? But not by him. Balding, inch-thick specs, increasingly given to bad breath, his were the attributes of a librarian not a troubadour.

This pained, mocking self-portrait is typical of how Merryweather sees himself. And his “inch-thick specs,” by the way, hail verbatim from Larkin’s poem “A Study of Reading Habits” (The Whitsun Weddings), an example of Tulloch’s frequent deft echoes and direct quotations from Larkin’s poetry—a tricky game, but he pulls it off. To appreciate the accuracy of Tulloch’s ear and empathy, read Larkinland; then read some Larkin, and finally watch and listen to Larkin himself.

Larkinland is for you if—unlike Larkin, apparently—you enjoy art inspired by art and artists, for example, Esther Freud’s coming of age novel about a boy’s friendship with architect Charles Rennie Mackintosh, Mr. Mac and Me, or Carlene Bauer’s Frances and Bernard, a fictional epistolary novel about Flannery O’Connor and Robert Lowell. Maybe next Tulloch might consider fictionalizing the letters between Larkin and Pym… 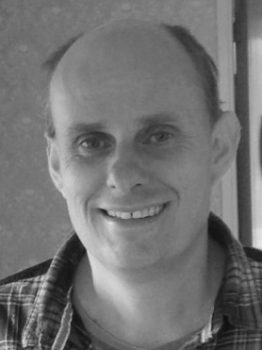 But Tulloch’s novel is a unique and engaging read on several levels, not least as an extended consideration of the relationship of writer to place, particularly the revelatory effect of a poet’s singular angle of vision, as in this passage from Larkin’s poem “Here” The Whitsun Weddings, 1964):

And traffic all night north; swerving through fields

Too thin and thistled to be called meadows,

And now and then a harsh-named halt, that shields

Workmen at dawn; swerving to solitude

Of skies and scarecrows, haystacks, hares and pheasants,

And the widening river’s slow presence,

Gathers to the surprise of a large town:

Reading those lines, I understand why Tulloch was inspired to delve into Larkin’s poetry, for it offers illumination not only of this place but also of the speaker of the poem and his relationship to Hull. Similarly, readers of this novel will be rewarded by Tulloch’s immersion in Larkin’s world and writing. Whether one describes the process as a kind of channeling, or of grafting, or of projecting, the result is the same: rich, evocative prose that captures not only character and place but character through place and vice-versa. Here, for example, in perhaps an echo of the poem above, Arthur Merryweather describes his new home from a trolley, a portrait that Tulloch uses to set the stage for all that follows:

Without warning the town itself came into view, or at least a pocketful of lights was thrown at the fogged window. Rubbing the pane with the cuff of his British Warm, Merryweather was surprised by the sudden flare of a city. From the train all he’d seen of his new hometown had been the flotsam of slums and semi-slums and soon-to-be slums cast up on the flats of a tidal river…Now, all at once – domes, spires, statues, the bold Parthenon of a Civic Theatre.

Bittersweet in tone and theme, Larkinland extends a persuasive invitation to read or re-read Philip Larkin, and a provocative reminder to attend to the importance of context and home in a writer’s work. We would all be singing different songs, telling different stories, if we belonged somewhere else. How fortunate Tulloch chose the lens of fiction, powerful enough to focus and magnify as “inch-thick specs,” to imagine Larkin experiencing and examining his own very particular world in Hull.