“The past is never dead. It’s not even past.” — William Faulkner, Requiem for a Nun 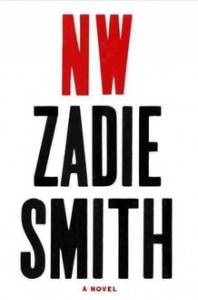 In his now famous 2001 review of Zadie Smith’s first novel, White Teeth (“Human, All Too Inhuman”), James Wood coined the term “hysterical realism” to describe the novels of writers of a school including David Foster Wallce, Don DeLillo, Salman Rushdie, and now Smith: novels that are showy and about ideas rather than character, that “want to abolish stillness, as if ashamed of silence.” NW forces silence upon the reader, shame or no. With this book, Smith’s pastiche of style, form, and character may be more pugilistic than hysterical; she challenges the very notion of what we talk about when we talk about realism.

Set in the Willesden neighborhood of northwest London, NW tells the stories of four characters who grew up in the housing projects, or “council estates.” The buildings—almost too perfectly—are named for philosophers, and NW carries the weight of being a Philosophical Novel. It’s also fitting that early on, the character Leah Hanwell remembers a line from a university syllabus: “Philosophy is learning how to die.” But ideas alone do not animate NW; though race, class and justice loom large, Smith reserves her deepest fascination for her characters.

There are four main characters (Leah, Felix, Natalie, and Nathan), but the novel belongs to Keisha Blake, who changes her name to Natalie in college. Her best friend Leah Hanwell, whom she’s known since she was four, honors the change, but many of those who knew her before do not. The two women’s friendship anchors the novel; their sum is far more complicated than either alone.

Neither woman likes time. At work, bored, Leah thinks, “This too will pass. Four forty-five. Zig, zag. Tick. Tock.” Leah detests time for putting demands on her fertility. She resists it out of spite, her only recourse. And so many allusions to time weigh down Natalie’s section that they distract, not as tic of the author but simply as an obsession of the novel. And if time here is the adversary, its accomplice is adulthood. “Overnight everyone has grown up,” Leah notes. “While she was becoming, everyone grew up and became.” Leah looks to Natalie’s life as holding all the markers of adulthood: she is a successful lawyer; she has two children; she owns a nice house.

But Natalie feels neither the comfort, nor the reality of her life. “When would her own adulthood arrive?” she thinks. When she and her husband, Frank, move to a new place, it is Leah, the childhood friend—not Frank, her adult partner—who accompanies her there for the first time. “Want to see me carry myself over the threshold?” Natalie asks her. When they arrive at the door, Leah turns the key. And “Natalie crept in behind her, into adult life.”

Natalie longs to arrest adult life. She realizes that the key to being a mother and keeping her work lies in “the management of time.” But she wants to slow it down, “to conserve” it. Smith writes: “She had been eight for a hundred years. She was thirty-four for seven minutes.” Natalie suddenly wants to eat the food of her youth, to sit and drink with an old schoolmate in the middle of the day. To go back to a time when all the choices were still ahead. For Leah and Natalie both, “[t]heir own materiality was the scandal. The fact of flesh.”

When Natalie’s secret life unites with her overt one, it sends her out into the street, where she “was nothing more or less than the phenomenon of walking. She had no name, no biography, no characteristics.” And when a former classmate, Nathan, recognizes her and calls her Keisha, she tries to inhabit her: “…she tried to place herself in the old role. It would be something to replace this absence of sensation, this nothing.”

She becomes a tabula rasa, and of course this scene occurs when she’s walking near her childhood home, the housing complex named after John Locke, who first brought forth the idea of the self as blank slate. But even name-changing, reckless Natalie cannot escape herself, and her identities collide at the end of the book.

It’s as though Natalie is also the author of the tale, her story told in the most distant voice, her ideas of observation and being two selves—the observer and the actor—very much in line with that of the writer waiting to see what will happen: “They had time to kill. Natalie had no idea what was to happen to them all after the time was killed.”

As in a classic escape novel, NW‘s characters seek not a flight from place but from themselves, all the while acutely aware of the impossibility of the task. And in a book that uses chronology as an organizing principle as much as it eschews and recontextualizes it, this theme feels particularly resonant. The sections don’t unfold with forward motion (Natalie notes that she “had a new urge for something other than pure forward momentum”). Through repetition and refraction, each point of view brings new and surprising insight into events.

Even when we learn of the fates of some characters in earlier sections—including huge, tragic fates—when we finally arrive at their section Smith achieves suspense; revelation carries this book. The point of view never settles in one place, sometimes switching gears mid-paragraph, and the overall effect reveals both an anxiety about storytelling and also something liberating about it. Time is both important enough to be hated and also, strangely, irrelevant. It’s going to pass anyway, no matter what we do.

Do you remember the culinary trend of molecular gastronomy? Chefs would purée a strawberry, say, and then remold it into the shape of a strawberry, complete with divots for the pinhead seeds, every detail perfect. Then they freeze it to present as a dessert that looked and tasted like a strawberry, but was not. Or was it? Though some would find this ridiculous, the goal of this trend was to draw attention to the essence of what makes a strawberry a strawberry. To experience it with more attention, and to marvel at its artfulness as it disappears on your tongue. Likewise, the novelist takes reality, filters it, and reconstructs it. Fiction is by nature both art and artifice. Smith has fused the convention of the character-driven novel and the bravura of the experimental, set it in northwest London, and reassembled it into something brilliant.