"Rather than a book about the epic tragedy, this is an exploration of the lingering ripples and ramifications of loss..."

"The events of 9/11 are integral to the novel’s structure and meaning, and to the Amendola family’s history and identity, but neither novel nor family are defined or constrained by the event."

Eddie Joyce’s debut novel, Small Mercies (Viking), is a family novel deeply and specifically set in the author’s native borough, Staten Island. In the best tradition of family narratives, he renders one very particular family, Gail and Mike Amendola and their children, wrestling with recognizable, universal dilemmas of marriage, parenting, work, births, and deaths. This is the stuff of life, and what I most love to read, but knowing the focal family had lost their fire-fighter son Bobby to 9/11, I approached Small Mercies with trepidation. Would the iconic tragedy overshadow the novel, the way a brilliant epigraph can overpower the story or poem that follows? Would the author employ the resonance of 9/11 as a shortcut to the reader’s emotions?

Within pages, my wariness vanished. The events of 9/11 are integral to the novel’s structure and meaning, and to the Amendola family’s history and identity, but neither novel nor family are defined or constrained by the event. Indeed, the complex and authentic matriarch Gail resents that the reach and scope of what killed her son requires her individual loss to be subsumed in a larger collective loss.

Her continuing very specific grief, and her wish to give Bobby’s unique individual life and death its due recognition, drives her and the narrative. Rather than a book about the epic tragedy, this is an exploration of the lingering ripples and ramifications of loss, the messiness and anger as well as sadness, about going on even while looking back. Life has an unstoppable forward flow, whether we want it to or not.

And in keeping with theme and authorial intent, the novel does not begin with the big bang of 9/11 but instead opens a decade later as Gail prepares for the tenth birthday party of her grandson and late son’s namesake, Bobby, born after his fire-fighter father perished at the World Trade Center. So the initial shocking event of this narrative is not the falling of the towers. Rather it is an ordinary, human scale revelation, which for the Amendola family is nonetheless momentous and transformative: Bobby’s widow, Tina, has met someone; fallen in love with Wade—a successful financier, a widower, a Wasp, a Manhattan outlander. Tina tells Gail, and asks permission to bring Wade to little Bobby’s party. Over the week leading up to the party, Gail’s is the dominant voice although her husband, surviving sons Peter and Frankie, and Tina each speak, creating a rich composite viewpoint, a balance of present and flashback. The voices, the stories, braid together in individual chapters and finally share the last chapter. Throughout, Bobby is silent, an absent presence like the missing twin towers on the skyline. He has slipped into that mysterious zone the dead inhabit: he is nowhere, and he is everywhere. Until, in the epilogue, he speaks, in a flashback to a moment of triumph on the high school basketball court, frozen in time, forever young, “his whole life in front of him.” 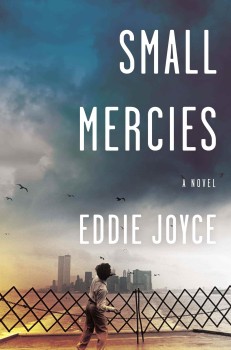 The arc of Bobby’s “whole life” will be cut short, the reader knows, but this is a story of an entire family’s life; multiple inter-connected layers of lives. And to tell this story, Joyce creates strong individual characters, with distinct voices, speaking a shared family language. Gail and Mike are a mixed couple, Irish and Italian Catholic. And every member of the family uses certain catch phrases drawn from both cultures: The days are long but the years fly by. Cold hands, warm heart. The title itself is a recurrent refrain throughout: small mercies, the modest mitigation of pain; for example, Frankie doesn’t come to the climactic birthday party drunk. Interestingly, the phrase also appears in the title of another recent and stunning debut novel triggered by an epic, iconic tragedy: The Train of Small Mercies (Putnam, 2011), David Rowell’s collage of bystanders’ voices and experiences along the railroad track the day Robert Kennedy’s body was carried from New York to Washington.

The reader of Small Mercies becomes familiar with the Amendolas’ identity and customs as a tribe: their work and play, their loving and fighting, their celebrating and mourning, their drinking and eating. Oh, what eating! Mike’s family ran a deli, and I found myself in the kitchen making eggplant parmigiana between chapters. Irish Catholic, from Brooklyn, Gail learned to cook from her mother-in-law. Now her own kitchen is Italian, and Gail firmly belongs to Staten Island after three decades of marriage.

Gail belongs to the Rock, and the book most of all belongs to her: a memorable, admirable, flawed matriarch struggling with chronic grief that follows no prescribed path or steps. Gail idealizes no one except Bobby, and she herself is riddled with believable faults and inconsistencies. She loves her children and husband, and hates them at times; she is as close to Bobby’s widow as a daughter, but briefly wishes her ill for being ready to move on. Staten Island is the author’s home territory, and it is Gail’s island now, across from that other island, glittering, fatal Manhattan. The ferry threads its way back and forth through the pages, carrying her precious family cargo away and returning them. All except Bobby.