I've come a bit late (only 14 years or so) to the wonder that is Megan Whalen Turner, author of the young adult fantasy series The Queen's Thief. Of all the books I've read in recent memory, not many compare to this series, which is serial narrative of the best kind—the kind that gets richer and more complex as it develops. Before this month, there were three novels: The Thief, The Queen of Attolia, and The King of Attolia. A fourth, A Conspiracy of Kings, has just been released. I can't wait to read it. 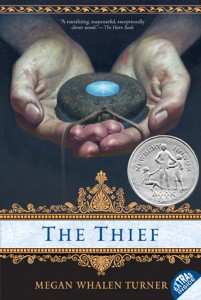 My reading list tends to skip all over and between the shelves of any traditionally labeled bookstore, which means I have breadth but not depth, and as soon as I’ve had a taste of a selection of writers in any one area, I’m likely to jump to another. I think it’s less an attention deficit than a perpetual and doomed optimism that if I move around enough I’ll eventually be “caught up” with reading everything. This practice translates into being continually behind in discovering the best new things in the many genres I love, which I assume would be easier if I stuck in one place. All this to explain why I’ve come a bit late (only 14 years or so) to the wonder that is Megan Whalen Turner, author of the young adult fantasy series The Queen’s Thief.

Maybe I worry too much that this genre doesn’t get the respect it deserves, but I often hear sentiments like “I’m not that interested in YA literature,” or “I don’t like fantasy novels.”

In “Dust and Daemons,” an essay on Philip Pullman, Michael Chabon argues: 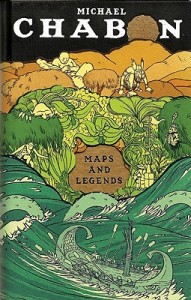 …at its best the genre is no less serious or literary than any other. Yet epic fantasies, whether explicitly written for children or not, tend to get sequestered in their own section of the bookstore or library, clearly labeled to protect the unsuspecting reader of naturalistic fiction from making an awkward mistake. Thus do we consign to the borderlands our most audacious retellings of what is arguably one of the two or three primal human stories: the narrative of Innocence, Experience, and, straddling the margin between them, the Fall.

This is a good start at explaining why, of all the books I’ve read in recent memory, not many compare to this series, which is serial narrative of the best kind—the kind that gets richer and more complex as it develops. Before this month, there were three novels: The Thief, The Queen of Attolia, and The King of Attolia. A fourth, A Conspiracy of Kings, has just been released.

I can’t wait to read it.

Yet when I’ve recommended these books, people don’t seem to believe that they could possibly be as good as I profess. Perhaps this is “consignment to the borderlands” in action, but perhaps it’s also because my descriptions of the texts are extremely vague; any substantial information would give away incredible surprises. How do you review or recommend a book about which you can say almost nothing? Worse, how do you review three books like this? I’ll try to be as forthcoming as is good for you: 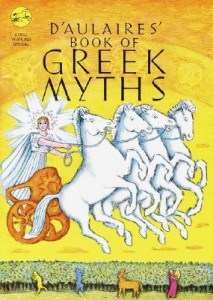 In the first book, the main character is a thief named Eugenides, nicknamed Gen. The series is set in a somewhat Mediterranean land: there are olive groves and an ocean, and the characters often snack on goat cheese and drink wine. There is not much modern technology—carts and horses, only the basics of medicine, but glass windows and pocket watches exist, as do guns. Turner says she intends the setting to be more Byzantine than ancient. There are three countries nestled next to one another: Sounis, Eddis, and Attolia, whose relationships alternate between trade partnerships and prickly standoffs. Each is ruled by a monarch: the King of Sounis, and the Queens of Eddis and Attolia. There is also a religious division between the old gods and the new, and mythology fills the first book, and weaves through the rest of the series as well. These are invisible gods I can imagine straight from the pages of D’Aulaires’ Book of Greek Myths, whose colored-pencil images have stayed with me since childhood. As in these illustrations, Turner’s gods are commanding and argumentative, scary and petulant; as likely to sigh and tell a character to go to bed as to send a more traditionally cryptic message from the heavens.

Gen narrates the first book, and when it begins he is in prison, having embarrassed himself by getting caught, a rather large blow to a professional thief’s reputation. To get out of jail he agrees to go on a mission with the King’s magus, who thinks he knows where to find a magical long lost treasure. That’s about all the specifics I can give without ruining the rest of the plot of all three books, but I can reveal a few more general things. 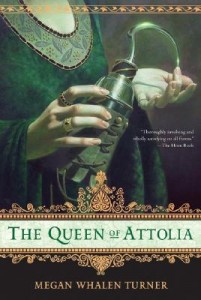 First, the second book in the series is better than the first, even though the first is lovely, so please, keep reading. The Thief was published in 1996, and The Queen of Attolia in 2000—there is clearly some maturing between the two. The third book is so ridiculously good it made me cry. In the midst of an adventure that turns into political intrigue, which gets wrapped around questions of faith and loyalty, this series contains a love story, and a story of redemption and forgiveness. I can think of no other values and struggles more important for younger readers to start wrestling with, and none in which I need more instruction and illumination myself. It’s all a little humbling, is what I’m trying to say.

Second: surprise. The end of the first book surprised me, but I saw how the trick had been accomplished. I thought I was prepared for The Queen of Attolia, but just when I thought I knew what the entire story was about, I was astonished all over again. And although the third book was a teeny bit more transparent, it too flipped my expectations upside down at several points.

(See how unsatisfying this kind of flabby description 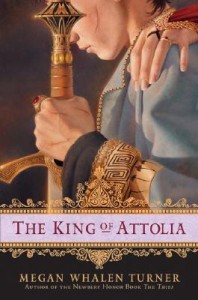 is? Please go read this series so you, too, can experience the frustration of giving only vague encouragements to your friends and neighbors.)

Third, even among YA fantasy novels, The Thief is exceptional because it’s a story about adults. These are not the sudden inheritors of magical powers, but people who have carried the weight of responsibility for their entire lives. Although I love the tradition in YA novels of getting rid of the parents early on so the young protagonists can transgress and transform, it’s also refreshing to break that mold.

Finally, the writing is excellent. I read several perfectly interesting, inventive, acclaimed novels soon after reading The Thief, and they just didn’t measure up. By turns lovely and funny, politically didactic and inventive, all three books are filled with real, interesting dialogue that never condescends, to any reader.

As always, when you love something so strongly, you run across someone who doesn’t, as in this fabulously boneheaded review, spotted on Goodreads:

“First off, I don’t understand why I found this book in the children’s section of the library. The plot is so complicated, the revelations so subtle, the themes and tone so mature. (And there are zero children in it.)”

Yes, Destinee, that is so misleading! (I wish her name were Mary or something, because it just makes this even more of a caricature, but I swear—Destinee.) The thought that we might encourage our children to read books that show adults as real, complex people; that we might challenge them with intricate narratives; that genre labeling might, for once, be productive instead of reductive in delivering a series this subtle and with such a mature tone to children; that we might enjoy the same books as they do, and so be able to discuss a shared reading experience—it’s really a shame. (In fairness, the overwhelming majority of the reviews of Turner’s work on Goodreads and elsewhere are rabidly positive; Destinee just struck a nerve.)

As always, the measure of maturity is a willingness not to take things quite so seriously. Here’s one example of the hilarity hidden in the fantasy, and taken entirely out of context so as not to spoil:

“Are you badly hurt?”

“Hideously,” said the king, without sounding injured at all. “I am disemboweled. My insides may in an instant become my outsides as I stand here before you.” 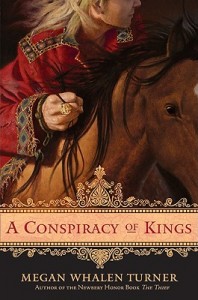 This is pitch-perfect Monty Python, as any seventh grader would recognize. And if you’re not encouraging your seventh grader to watch Monty Python (or to read Megan Whalen Turner), then you are not the cool parent you always hoped you’d be. These are books for young adults to stretch up to, and for adults to savor without stooping. I’m excited if you haven’t read them yet, because that means you have the thrill of reading them for the first time still ahead of you.

Wanting more character, more revelation, more subtlety, more story…and then getting all of these: is there any greater pleasure? 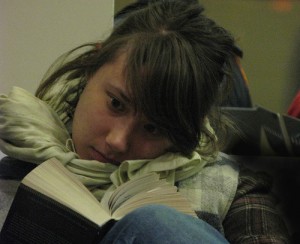 – If you’re shopping for Turner’s books (including her short story collection, Instead of Three Wishes), order from your favorite independent bookstore. And while you’re there, pick up a copy of Michael Chabon’s wonderful essay collection Maps and Legends, which includes “Dust and Daemons”.

– Read excerpts from The Queen of Attolia, and from Instead of Three Wishes.

– Listen to, watch, and read these interviews with the author: with HarperCollins (podcast), (video) / at The Enchanted Inkpot / with HipWriterMama / and with Squeetus Blog (part 1 of 3).

– Watch trailers for the first book in the series, The Thief, and the fourth book, A Conspiracy of Kings: