The Disreputable History of Frankie Landau-Banks, by E. Lockhart

E. Lockhart's latest YA-novel--wherein Frankie Landau-Banks infiltrates her boarding school's all-male secret society--is a lot of fun. The book is also a love letter to teenage girls asking them to value their own worth. As an antidote to the swooning of the Twilight crowd, Frankie’s gutsy determination is a welcome dose of a different kind of romance. 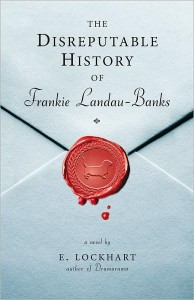 I didn’t go to boarding school, but I always sort of wanted to. At fifteen or sixteen years old, to escape from the clutches of family life that had suddenly become so oppressive would have seemed pretty great. People I met in college who went to boarding school were a little like people who went to those tight-knit summer camps where kids made out in the woods and all sorts of shenanigans ensued behind the camp director’s back—they had a worldliness that everyone envied. They already knew how to get booze, how to sneak around, or how act gracefully insouciant when they got caught.

So the glimpse into the boarding school world that E. Lockhart provides in the YA novel The Disreputable History of Frankie Landau-Banks (Hyperion, 2008) is vicariously satisfying in its confirmation of my suspicions: those people did have more fun. I would have loved to be Frankie; she’s smart and pretty, but most of all she’s bold. The novel begins with Frankie at the end of the summer after her freshman year. She doesn’t quite realize how much she’s changed: “between May and September she gained four inches and twenty pounds, all in the right places,” and her older sister’s graduation from Alabaster—a name that would fit perfectly into the pantheon of New England high-end prep academies—has left Frankie poised to make her own mark when she begins her sophomore year. In short order after retuning in September, Frankie draws the attention of senior Matthew Livingston (athletic, smart, and witty), is taken in to his group of friends, sits at the cool kids’ table in the cafeteria, and finds herself suddenly surrounded by people who, as a result of their own social dominance, are funny and self-deprecating, charming and assured.

The problems begin when, little by little, Frankie realizes that her new friends, particularly Matthew and his best friend, nicknamed Alpha, don’t take her as seriously as she wants them to. When she insists on continuing an argument, they reassure her that she’s still “cute,” and Matthew won’t even accept that her wordplay with what Lockhart dubs “the neglected positive,” is really intelligent and funny. (The neglected positive originated with P.G. Wodehouse and is typically amusing. For example, if indulge means “to put up with,” then dulge ought to mean “to reject,” as in, I dulge some men’s behavior.) The boys belong to the same patriarchal secret society Frankie’s father did when he was at Alabaster, the Loyal Order of the Basset Hounds, and they won’t let her in. When Frankie uses her smarts and a convenient opportunity to become the alpha dog, hijinks and heartbreak ensue.

When E. Lockhart is on, she’s really on, as in her description of the three ways women react to male behavior, exemplified by a midnight party on the golf course. Lockhart categorizes: some women won’t see the point and will retreat, some will be bored but try to be a good sport because they don’t want to seem like they’re no fun, and others will try to outdo the boys by drinking as much or more, etc. Insightfully, she points out that this truth about male/female behavior is just as valid for the obscure Russian movie crowd. She then continues:

As I said, most girls will engage in one of these three behaviors, but Frankie Landau-Banks did none. Although she went home that night feeling happier than she had ever been in her short life, she did not confuse the golf course party with a good party, and she did not tell herself that she had had a pleasant time. It had been, she felt, a dumb event preceded by excellent invitations. What Frankie did that was unusual was to imagine herself in control. The drinks, the clothes, the invitations, the instructions, the food (there had been none), the location, everything. She asked herself: If I were in charge, how could I have done it better?

The whole plot is just really fun. It’s fun to imagine running around the old Alabaster buildings in the dark, and it’s fun to watch a teenage girl who almost everyone underestimates pulling the strings with such assurance. Frankie’s teenage superpower is her confidence in her own intelligence. What she doesn’t realize is that even when you win control, as a woman, you’re still not an equal, and that boys and men won’t see you as a winner, but as someone who has cheated.

Lockhart successfully makes her feminist social commentary without moralizing—not an easy task. I do wish, however, that the novel as a whole were messier. Perhaps this is an unfair request; it’s certainly one that would take the reader outside the world of Frankie’s head, which is a good narrative place to be, but Alabaster students didn’t quite seem as chaotic as I remember actual high school students to be. No one ever seemed homesick, or behaved all that badly toward each other. Even Frankie’s ex-boyfriend, who cheated on her, articulately apologized. Really? Would Matthew, the coolest guy in school, actually walk around correcting everyone’s grammar? Would the headmaster make a deal to help a failing student if the student spied on a troublemaker for him? The students drink a couple of cans of beer, but that’s it—is high school still that innocent? The few false notes here don’t ruin the truth of the rest of the story, but they’re distracting. The problem with writing about high school is that readers are so intimately familiar with the dynamic: this is realism that won’t withstand much stretching at the edges.

At twice Frankie’s age, I still find gender relations to be complicated and infuriating. And in the end, the novel doesn’t provide any easy answers to the hard questions it confronts. If I were a teenager, I would have loved this book. As an adult, I wonder whether Frankie’s fate, especially the physical scars she bears after her adventures, are empowering or punishing. But Lockhart wouldn’t be telling the truth if she asserted that to be a woman in control isn’t sometimes a lonely path.

So you could look at this novel as a reality check, or as a love letter ts teenage girls asking them to value their own worth. As an antidote to the swooning of the Twilight crowd, Frankie Landau-Banks’s gutsy determination is a welcome dose of a different kind of romance.

– Lockhart’s website provides this excerpt from The Disreputable History.

– Here are more YA books by E. Lockhart; click on the covers for descriptions of each.