The Quickening, by Michelle Hoover

Every work of fiction is grown from at least one seed of truth, whether it’s an emotional truth, an actual event, or a fact of nature. For Michelle Hoover, author of the elegant debut novel The Quickening, this seed was a fifteen-page document that her great-grandmother typed out in the final year of her life. In it, “broken hearted and sick in mind and body,” she recounted her seven decades as an Iowa farmwoman. Loosely based on this document and family oral histories, The Quickening follows the journeys of two Iowan families trying to build their lives amid the hardships of the Great Depression. 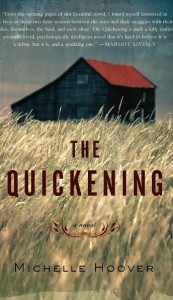 Every work of fiction is grown from at least one seed of truth, whether it’s an emotional truth, an actual event, or a fact of nature. This seed is planted, cultivated, toiled over, sometimes prayed over, until it finally blossoms to form something that stands on its own, something that no longer resembles the seed but is intrinsically connected to it all the same. For Michelle Hoover, author of the elegant debut novel The Quickening, this seed was a fifteen-page document that her great-grandmother typed out in the final year of her life. In it, “broken hearted and sick in mind and body,” she recounted her seven decades as an Iowa farm woman.

Loosely based on this document and family oral histories, The Quickening follows the journeys of two Iowa families trying to build their lives amid the hardships of the Great Depression. Like Hoover, I’m a descendent of Iowa farmers, so I was interested in this story, curious to learn what my ancestors might have encountered as they built their farms in early 1900s, when so much was at stake and so little could be counted on. While there are subtle references to what is happening in the time period, Hoover’s focus is on the insular, everyday life of the American farmer—raising animals, rearing children, making sure the ground is plowed and the mouths are fed. These details are delivered through the unflinching and candid points of view of two very different women: Enidina—Eddie for short—and Mary. As each other’s only neighbors for miles, Eddie and Mary build a tenuous friendship: “I thought then that Mary and I might become more than neighbors,” Eddie says, years after they first meet. “That we might be friendly for once.”

A stalwart woman who could “heft the grain and birth a calf, lead a plow with the best of them,” Eddie’s voice is steady and haunting. Penning her story on her deathbed, Eddie writes: “And I have little left to me but the thought of you my grandchild who I’ve known only in the warmth of your mother’s belly under my hand. Even if you never come home, you should understand the way our life once was, your grandfather, your mother, and I, and all the little things that make its loss so very terrible in my mind.” Eddie and her husband, Frank, suffer through droughts, storms, fires, and several miscarriages, and though she reports these incidents with resignation, her pain is strikingly clear: “After I lost the second one, I was bedridden for a time. It wasn’t that I was too tired to work or too pained to lift my legs. Something in me wasn’t right. Some sadness I couldn’t undo. The women in town did their best to show me how wrong I was to pay so much attention to what I’d lost. I guess in a way I knew I should listen.”

Mary’s purpose for narration is less explicit, but no less poignant. Grappling with the secrets she keeps from her abusive husband, Jack, her life is rife with contradictions: taught to play the piano and walk in heels, she must also learn to dirty her hands in the fields. Taught to fear her husband, she also desires him. “After all these years,” she says of Jack, “after three sons and my fingers wearied from the work—I choose him, and I would, again and again.”

Though their lives are similar in so many ways, Eddie and Mary hold widely divergent views on nearly everything from politics to what to feed a man while he’s sick. This becomes particularly clear when a Depression-era farming mandate forces them to slaughter all of their pigs. Though Frank initially refuses, Jack insists he carry through with it, and the reader then catches one of many glimpses of Jack’s brutal instincts for self-preservation. Although Eddie’s and Mary’s narrations sometimes overlap, with each women justifying her own viewpoint, Hoover delivers these scenes with such confidence that the characters’ reliability never comes into question.

After the slaughter, the novel builds toward its central tragedy, an “accident” involving both Mary’s and Eddie’s children. This devastating incident, as well as its horrifying aftermath, propels us through the novel’s final, gripping pages, in which the harsh Iowa land finally takes its toll on the two neighboring families. Here, we learn why Eddie has never met the grandson to whom she writes. “That quickening under [your mother’s] skin,” she says, “it’s the closest to you I’ve ever come.”

Hoover covers a large expanse of time in The Quickening, and her graceful prose lends an epic feel to this beautiful, compact novel. The years unfold for the reader in the same way they might have unfolded for my ancestors: each day blends into the next, and the loneliness of farm life is only broken up by the fears and joys of pregnancy, love and loss, depression, and scandal.