The imagined Hungarian village of Zavitar is home to the indomitable Valeria, a single lady of a certain age, given a second chance at love and excitement in the arms of the local potter. Marc Fitten's debut novel, Valeria's Last Stand, explores how the fall of Communism effects a memorable cast of characters, all through the lens of fable. 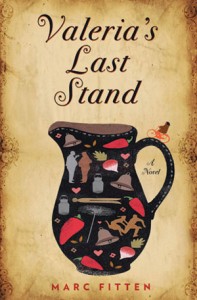 What does a spinster in a sleepy Hungarian village passed over by love, family, and friendship have to look forward to in the late season of her life? A lot, according to Marc Fitten’s charming fable about lust and love in the post-Communist rubble of his imagined Zavitar, a village in the hills of Hungary, where life is otherwise as exciting as the turnip crop and the mythically large bottom of the local hairdresser. Fitten’s debut novel, Valeria’s Last Stand (Bloomsbury), is a finely conceived fable about love, artistic inspiration, and rebirth, set amid the political and social changes brought about by the fall of communism. It is also a glimpse into the train-wreck effects of capitalism on the other side of the iron curtain. The bellicose Valeria opens the novel with unambiguous contempt for the neighboring farmers she grew up with, “You’re all, to your last ringworm-infested child, peasants. Even your dogs are peasants. How is it possible?” But she seems to have no less contempt for the capitalist mentality taking over:

Adolescent men appeared from nowhere. They drove expensive cars and kept company with expensive, long-legged women, women who were useless in all capacities save sex, who lacked any apparatus that might make them useful to society’s betterment. They certainly were not revolutionaries, these women. 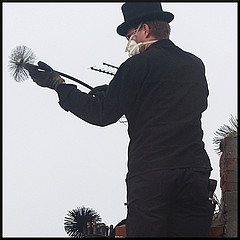 This revulsion towards both the old world and the new sets the stage for the choices that Valeria and other pivotal characters are forced to make, in spite of their relative comfort, when love, lust and progress come tearing through the town by way of a train station, a chimney sweeper, and a potter’s lately awakened artistic aspirations.

While Valeria’s character clearly represents the established proletariat vision of the hard-working, self-denying peasant, she is not above watching Brazilian soap operas, and splurging on the occasional imported banana. She otherwise spends her time criticizing her neighbors for their whistling, their brown-spotted cucumbers, and the celery they sell that smells like cat-piss. She rails against the flashy outrage of the mayor’s wife for having small breasts and hips and for buying a whole bag of oranges, when, as Valeria wistfully recollects, one would have sufficed to serve as treat to an entire family in the socialist days. It is inevitable, therefore, that the reader looks to Valeria for conflict, as her contempt for the world around her is an iron curtain in and of itself. It’s a wall that must come down in order for Valeria to progress into some kind of future, a future that Fitten casts as uncertain, and not necessarily all that promising. Just how Valeria lowers her barriers and combats her self-admitted pugnacity to become vulnerable to the possibility of change lies at the story’s heart. 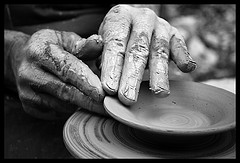 Like all fables, Fitten’s novel relies heavily on the allure of romance, on good will overwhelming malice, and on single-minded determination triumphing over devious cunning. Amid the changes besetting Zivatar, after years spent forgotten by history and progress, Valeria battles the hostility of her peasant neighbors. Those neighbors remember her as the girl who betrayed her reluctant lover to the Russian camps when he refused to marry her, and who sawed off the bells of the church after he was gone. They can’t seem to forgive Valeria criticizing their vegetable stands or judging them for their weakness for drink. Thus, when she sets her romantic goals on the town’s potter, the villagers proceed to riot in front of her cottage, throw chestnuts at her windows and destroy the gifts the old man has brought as a romantic gesture. How Fitten manages to make these spiteful characters likable, or how he makes romance amongst senior citizens so believably sweeping (and almost puerile) is one of his many talents as a writer. 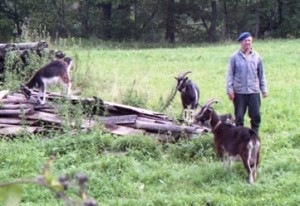 The characters’ fascination with their own sexual awakenings is at times both hilarious and touching: the potter, Valeria’s lover, forms vases in the shape of breasts, which even his young apprentice has to admit are warm and yielding like the real thing. This older gentleman is not only capable of satisfying a woman all night long; he has a second lover, Iliaboya. As Valeria’s capable antagonist, Iliaboya represents the dawn of capitalism, with her scandalous outfits, her contempt for the patrons who fill her bar and wallet, and her hungrily entrepreneurial spirit. Clever and resourceful, Iliaboya catapults herself to financial success on the day her husband is buried, when she persuades her patrons to tear down the main wall of her husband’s tavern, thus exposing the merriment inside to all the neighboring hills and pastures. Thereafter a man could hardly pass without feeling compelled to join in a drink himself. 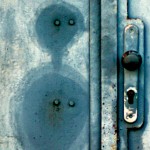 The hyperbole Fitten uses to describe the town feels too much at times. Female voluptuousness is underscored so often and so much that one has to wonder if we’re talking about women or cows. So sex-starved are Zivatar’s villagers that when Iliaboya makes a pass at her lover in the bathroom, every man in the bar gathers round the door to listen and peek through the keyhole. Valeria is not protected from her porn-starved neighbors either, even behind gates and locks intended to ward against their voyeurism. Her exploits are always accompanied by a riot gathering outside, with the underlying purpose not an objection to Valeria’s pleasure, so much as the opportunity to catch old people in the act. Indeed there seems very little on the minds of all the characters in the novel beyond sex. Aside from the Communist-history lesson and the heavy-handed outlining of the socialist mentality that populates the first few pages, the rest of the tale abandons the semblance to real-life social dynamics, and surrenders very quickly to a surrealist cuteness similar to Joanne Harris’s Chocolat, without the mystic element and the commentary on repressive dogma.

In this respect, Fitten’s attempt to emulate all the gimmicks and devices of the fable with simplistic language, short sentences, and sketchy characterizations, ends up stumbling into the challenges that narrative style presents. For example, only one of the many male characters is given a name. Even Valeria’s lover, one of the pivotal characters in the tale, is referred to throughout as the potter. But by the time we get to Mr. Plum and Mr. Pear this device comes across as a clumsy attempt to explain two brand new characters serving important roles late in the story, rather than a style or method to shape an allegory. With the notable exception of Valeria, the characters are at best archetypes, at worst, clichés. The potter discovers that he loves making art, and waxes on in philosophical banalities about the role of artist as a god. The chimney sweeper is soot incarnate: lascivious, mean, and conniving. He seldom does more than paw at women and kick an endless supply of stray dogs. Ferenc, the one male character given the distinction of a name, has nothing else to recommend him to dimensionality: he is madly love with Iliaboya and acts throughout as the dumb, besotted beast. The two main women are simplistically characterized as being a volcano and an ocean, respectively. As if that distinction were not general enough, Fitten blurs the line even farther, amending the metaphor by adding “an ocean or a river.”

There are other setbacks to Fitten’s attempts to abide by the language of fables. A reader looking for an elegant, voluptuous sentence in the style of Angela Carter or Kelly Link won’t find one here. The author opts for a faux-Zen approach a la Coelho, perhaps in the hope to make a simple sentence resonate with wisdom; but unlike Coelho, or Hesse, in most instances his short syntactical stubs fail to delivery anything beyond a flat read. Characters are seldom seen doing much 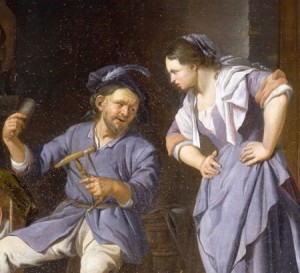 more than shaking their heads, repeating the same clichés (“We aren’t getting any younger”), pointing at things and each other, and even batting their eyelashes. These stage directions abound so much in the book that in one chapter Iliaboya seems unable to demonstrate any emotion other then the shaking of her head, which she does so often one imagines her nursing a headache by the end of the chapter. Women bake cookies and paw strangers, and men wave, drink, and slam fists into tables like caricatures of small-town peasants. Fitten’s hold over his characters’ personalities is especially damaging in one central episode of the story, where the charm and novelty of Valeria and Iliaboya’s rivalry deflates in a disappointing Hollywood-style scene, in which the least interesting character is revealed to possess unexpected talents.

Still, these awkward moments, not uncommon in a debut novel, should not prevent the reader from appreciating the loveliness of this imaginative tale, with its philosophy of rebirth in old age, and hopeful view of the role that maturity and courage play in a person’s happiness. Valeria alone is worth the read, carrying the heft of the charm with her irascible temper and her militaristic treatment of her peasant neighbors, as well as the men she loves. It is a pleasure to be taken through the story with her. Humor, too, has its peaks, as when the mayor, reflecting on the circumstances that tempted him into infidelity, explains,

“She had hazel eyes with green specks and a bum that extended out into the world the way the continental shelf extended out into the abyss. The mayor remembered slipping into that abyss. It was an incomparable pleasure, but that’s all it was: an affliction of the senses. A slippery, woozy, euphoric narcosis of the ass.”

It would be difficult to accept this kind of apologia with a straight face.

In spite of its imperfections, Valeria’s Last Stand delivers what it aspires to: a sense of good will towards its characters, interest in the imagined world of Zavitar, and plenty to consider after the last momentous chapters of this gentle tale. This young author’s work engaged me far deeper and with more satisfaction that those of some of his more seasoned contemporaries in this genre. I look forward to reading whatever tale he weaves next. 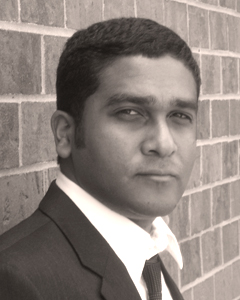