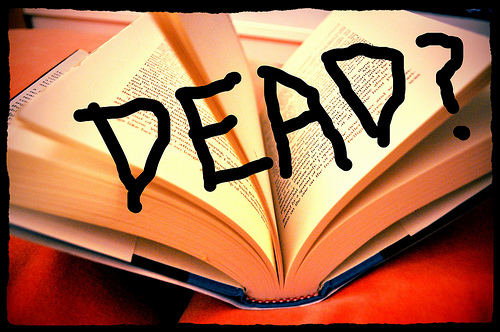 David Shields is a very lucky man. I think that most of us, when we enjoy something that everyone else seems to hate (or when we dislike a thing that they all love), feel a twinge of nervousness, a quiver of doubt. Perhaps we feel superior and isolated at the same time, wondering why we, in this case, appear so separate from the crowd.

Not David Shields. One of the most notable qualities of both his 2010 book Reality Hunger, and his recent essay, “Life is Short: Art is Shorter,” co-authored with Elizabeth Cooperman, in the Feb 2013 issue of The Writers Chronicle, is his confidence in the perfect correspondence between his own personal preferences and the Western cultural zeitgeist. If Shields dislikes long novels, then long novels simply have become dislikable. If he finds old stories like Joyce’s “The Dead” passé, then, lo! They are passé.

I am, of course, being slightly unfair. Cooperman and Shields have written a great essay; both powerful as a unified argument and elegantly satisfying as a collage. Its many proverb-like short paragraphs–some composed by them, some adopted from Charles Baxter, Sarah Manguso, Virginia Woolf (amongst others)–are rewarding over multiple readings. As a defence and validation of very brief prose, the essay is excellent. It’s hard to disagree that very brief prose is well-placed to capture certain “contemporary feeling states,” or that:

In the best short-shorts, the writer seems to have miraculously figured out a way to stage, in a very compressed space, his/her own metaphysic: Life feels like this or at least Some aspect of life feels like this.

One can admire and enjoy brief prose, however, without being convinced by the essay’s polemic: that because brief prose is good, long prose is bad. According to Shields and Cooperman, long books are not only bad, not merely suspect, but also on their way out, outdated. They quote Charles Baxter’s suggestion, in his 1989 introduction to Sudden Fiction International: 60 Short Stories, that long books remain popular due to what Baxter calls the “Anglo-centric critics,” a strangely potent cabal who force upon us all the belief that “the huge Victorian novel” is “the only serious form of literature…”

Shields and Cooperman are brilliant on the attack, but somewhat vague when providing evidence. Compare, for instance, the wonderfully Soviet-esque tones with which they predict the novel’s impending irrelevance,

Jonathan Franzen and Ian McEwan are antiquarians; they’re entertaining the troops as the ship goes down. Their writing is pre-modern.

with the muddiness of their claim that readers have already moved on:

Many people’s reaction to a lot of longer stories is often Remind me again why I read this, or The point being?

The difficulty that this latter claim faces is that, of course, the common reader appears to have no idea that long novels have become bad. Visit your local public library. Look at the shelf of reserved books. Can you spot more than five thin spines? Indeed, people seem not merely eager to read long books–they want to read multiple versions of them! Few readers seem upset that there were three Hunger Games or twenty Master and Commanders. Personally, I would be overjoyed if publishers were desperate to release Invisible Cities and Zombies, or if my local book club discussed one Amy Hempel vignette per meeting, but it just ain’t so.

This is not to claim, of course, that “many” people do not enjoy short fiction. I’m one of those that do. But I cannot help feeling, as I read and re-read Shields and Cooperman’s essay, that perhaps the cultural shift towards brevity, which they believe is occurring to all of us, might actually consist of a more specific, more local phenomenon. In other words, while I do not doubt that David Shields is in earnest when he feels he is not the only one who has become bored with novels, perhaps there is some selection bias at work here.

In what feels like the essay’s heart, Cooperman describes Shields’s personal turning point, his break with conventionality in literature:

Twenty-plus years ago, David was hired to teach fiction writing at the University of Washington…

He was weary unto death of teaching story—and novel-writing—the endless furniture-moving of conventional fiction.

He would teach standardly great stories, and he’d admire them from afar, and sometimes the students would love the stories, but he had no real passion for, say, Joyce’s “The Dead.” He could see what made such stories “great” or at least good or well-made, but he had, and has, zero interest in doing something similar.

Is it significant that brief prose’s origin story takes place in a classroom? Is it a coincidence that the groups which Cooperman and Shields most frequently cite as admirers of brief prose are, firstly, creative writing teachers, and, secondly, their students?

When one is put in an environment where one is forced to read huge numbers of pages for class, it is no wonder that the middle passages of Emma and Gravity’s Rainbow become obnoxious. But this is not the situation of the non-academic, non-student reader. For those common readers, the evidence suggests that they continue to like the kind of books you need two hands to hold up.

The Tell, by Hester Kaplan